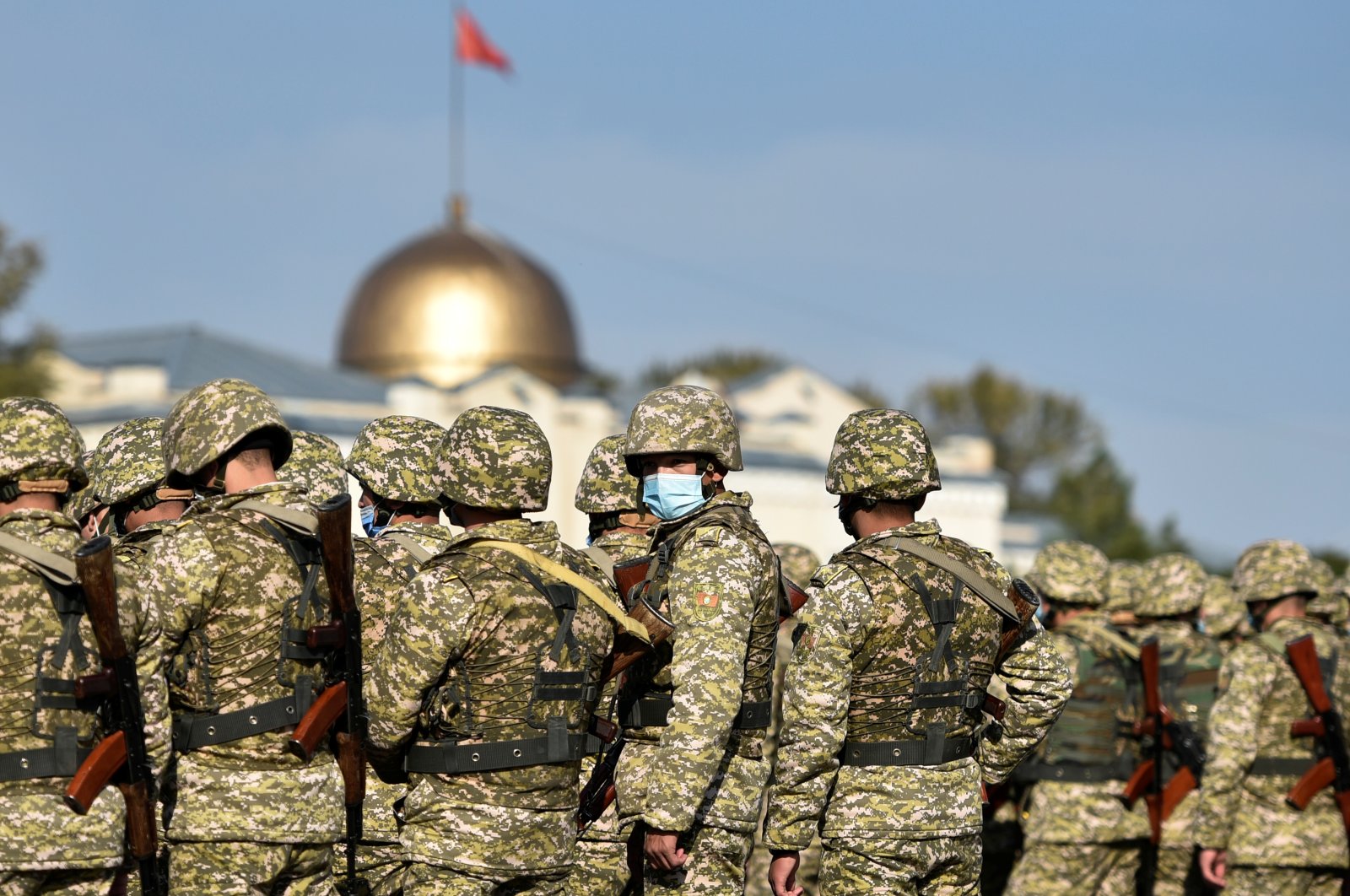 Members of Kyrgyz armed forces line up in Ala-Too Square after President Sooronbai Jeenbekov declared a state of emergency in the capital and ordered troops to be deployed there, in Bishkek, Kyrgyzstan Oct. 10, 2020. (Reuters Photo)
by DAILY SABAH WITH AGENCIES Oct 11, 2020 12:39 am
Edited By Paris Achen

Kyrgyzstan's parliament on Saturday made a populist politician recently freed from jail prime minister, with Sadyr Zhaparov immediately saying he expected the country's embattled president to step down.

Hundreds of Zhaparov's supporters took to the streets of capital Bishkek to celebrate, after a week that saw opposition supporters demonstrate and clash with police over a contested election Sunday.

According to health ministry figures, at least one person has died and over 1,200 have been injured in the Central Asian country. The violence also saw shots fired as groups of rival supporters clashed Friday.

Zhaparov was made acting prime minister after a majority of lawmakers supported his candidacy at an extraordinary session of parliament.

He said he expected President Sooronbai Jeenbekov to resign "in two to three days" in comments at his confirmation on Saturday. "I met with (Jeenbekov) here at the state residency. He said that after confirming the cabinet and government structures, he would resign," Zhaparov said at his confirmation.

A deputy speaker at the extraordinary session Saturday noted that Zhaparov would become acting president if Jeenbekov resigned as Speaker Myktybek Abdyldayev, who would normally step in, resigned shortly before the vote on Zhaparov's candidacy.

Some opposition factions accused 51-year-old Zhaparov of being in league with the president. Two sources in the parliament, speaking on condition of anonymity, told Agence France-Presse (AFP) that they expected Jeenbekov to honor his pledge to step down.

Zhaparov, a former lawmaker with a reputation as a headstrong nationalist, and former President Almazbek Atambayev were freed from prisons by their supporters in the early hours of Tuesday, along with several other prominent politicians.

But whilst Zhaparov's political star appeared on the rise Friday, Atambayev was rearrested by police and security forces following a raid on his compound outside Bishkek.

The committee added that it was currently "identifying and arresting other accomplices of this crime."

"Threat of murder and physical harm against judges and administrative employees" in jails had been used to free Atambayev and other politicians, including two former prime ministers, state prosecutors said Saturday.

The prosecutors urged the freed politicians to return and serve out their sentences, but did not mention Zhaparov.

Among others detained on Saturday was former deputy interior minister Kursan Asanov, who had assumed leadership of the ministry when the unrest began.

Kyrgyzstan hosts a Russian military airbase and is a hub for trade with neighboring China. The former Soviet republic, which has a population of just 6.5 million, is also home to a large Canadian-owned mining operation.

Unrest in Kyrgyzstan has alarmed ally Moscow, which has watched neighboring ally Belarus rocked by post-election protests and the battle over the Armenian-occupied Nagorno-Karabakh region of Azerbaijan. Kremlin spokesman Dmitry Peskov said Russia was "deeply concerned" about the "situation resembling a mess and chaos" on Thursday.

Concerned by the political chaos, Ankara also keeps a close eye on the developments.

Kyrgyzstan has seen two presidents overthrown by street protests since independence from the Soviet Union, the first being the "Tulip Revolution" in 2005, months after "color revolutions" of Georgia in late 2003 and Ukraine throughout 2004. Askar Akayev, who ruled the country since 1990 in the wake of independence from the USSR, faced violent riots leading to his ouster after the third election ending with vote rigging and mass election fraud accusations.

His successor, Kurmanbek Bakiyev was himself deposed in 2010 after a tumultuous five-year-rule and replaced by "Tulip Revolution" ally Roza Otunbayeva. Another key figure of the 2005 uprising, Atambayev emerged victorious in 2011 presidential polls. Jeenbekov's election victory in 2017 marked the first democratic transfer of power in the country.

Jeenbekov came to power in 2017 with support from Atambayev but the two fell out soon afterward and Atambayev was jailed during a previous bout of political violence last year. Russian President Vladimir Putin failed in his attempt to resolve the pair's standoff.

The opposition is currently divided between 11 parties that represent clan interests.

Zhaparov, previously served as an adviser to Bakiyev, emerged as a leading player in the crisis Tuesday when he claimed the title of prime minister before Jeenbekov had signed off on the resignation of the old premier. He was sentenced in 2017 to 11.5 years in jail on hostage-taking and other charges but that conviction was squashed by a court less than a day after his release.

Prior to his appointment as premier, Zhaparov called for constitutional reforms before fresh presidential and parliamentary elections.

Zhaparov's supporters defied police and security forces, who returned to the streets to enforce a ban on rallies imposed under a state of emergency for the capital ordered by Jeenbekov on Friday. A famous local rapper who performs wearing a mask sang at the festivities as supporters, many of whom had arrived from outside the capital, danced and set off fireworks. Some wore Sadyr Zhparov caps while another man held a large banner reading "Sadyr is our president."

Lawmakers approved an almost unchanged cabinet Saturday, although Zhaparov said he planned to appoint young politicians to top posts in the future.

The new government is expected to be in place until the country holds fresh elections after authorities canceled the results of the first vote amid allegations of mass vote-buying.

On Friday, shots were fired and at least five people injured in clashes between supporters of Zhaparov and a bloc of opposition parties that said it wants to form a government led by Omurbek Babanov.

A car carrying Atambayev, who participated at the bloc's rally, was hit with "live ammunition" according to his spokesperson Joldubayeva, who was also at the rally. Video shared on social media showed a man firing at the car as Atambayev was evacuated from the clashes.

Zhaparov on Saturday denied responsibility for the violence and suggested that Atambayev's own bodyguard had shot at the former president's car.

On Saturday night Bishkek was calm as the curfew took effect.

The president on Friday had instructed troops to re-establish order amid flare-ups of violence, and military checkpoints were put up overnight around Bishkek while personnel carriers patrolled the city. He also sacked top security council officials who had either supported his opponents or failed to intervene when the opposition said on Tuesday it was seizing power.