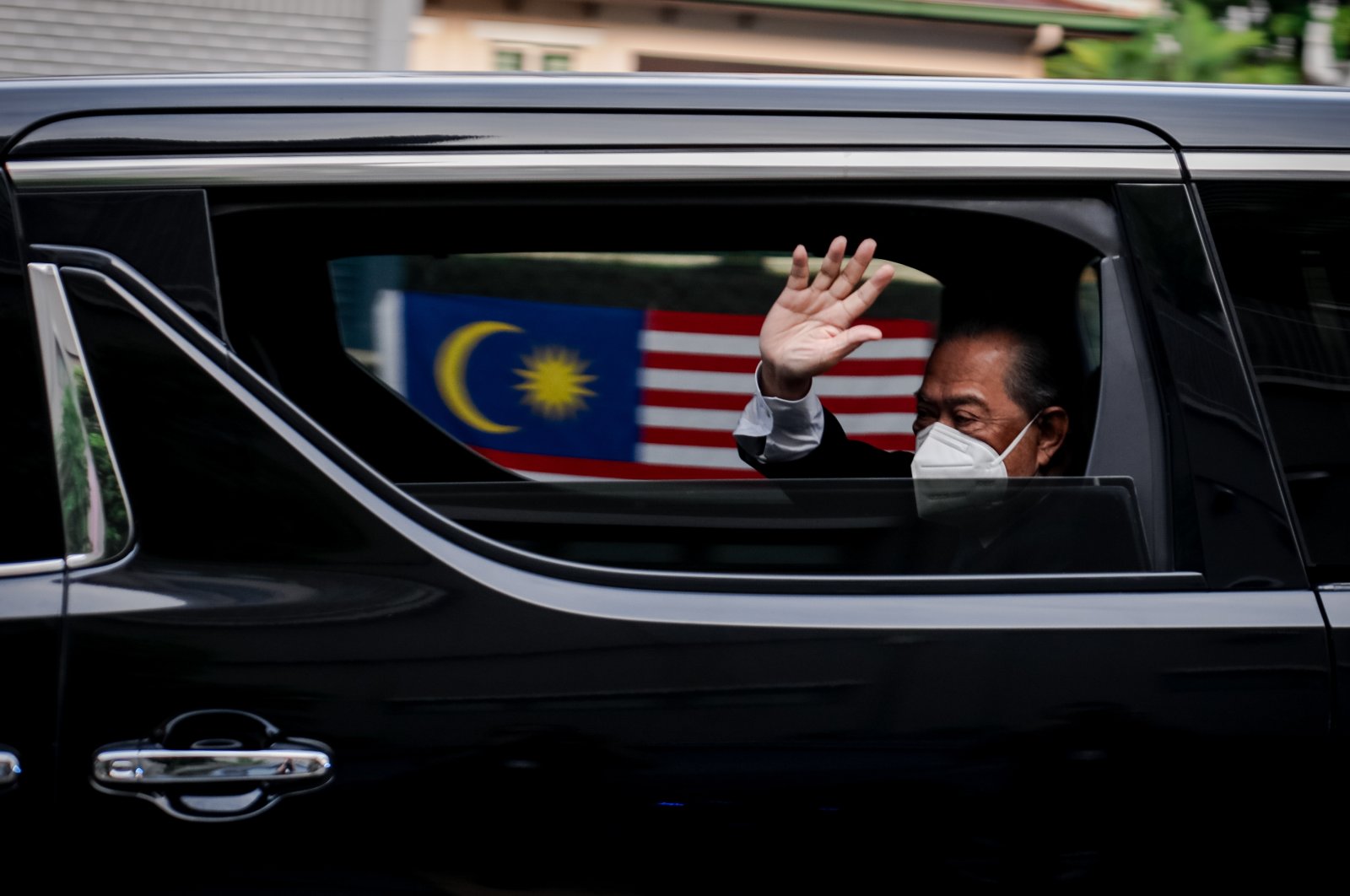 Malaysia's Prime Minister Muhyiddin Yassin waves as he arrives at the National Palace in Kuala Lumpur, Malaysia, on Aug. 16, 2021, as he was expected to quit after just 17 months in office. (AA Photo)
by Agencies Aug 16, 2021 8:45 am
RECOMMENDED

Malaysian Prime Minister Muhyiddin Yassin has handed his resignation to the king but will stay on as interim premier, the palace said on Monday, after months of political turmoil culminated in the loss of his majority.

Muhyiddin's hand had been weakened by months of infighting in his coalition and it is unclear if the developments will ease Malaysia's political crisis after a tumultuous 17 months in office for the prime minister.

The palace said an election was not the best option and King Sultan Abdullah Sultan Ahmad Shah was happy for Muhyiddin to stay on as caretaker.

"The king has received the resignation letter of Muhyiddin Yassin and the entire cabinet effective immediately," it said in a statement on Facebook.

Later, in a nationally televised speech, Muhyiddin said he submitted his resignation to the king because he had lost the confidence of a majority of lawmakers, adding that he hoped a new government would be formed as soon as possible. He had arrived at the national palace earlier on Monday, but his office did not respond to Reuters' requests for confirmation at the time.

The power struggle in the ruling coalition unfolded at a time when Muhyiddin has sought to reboot a pandemic-stricken economy and curb a resurgence in COVID-19 cases. Malaysia's ringgit currency earlier fell to a one-year low and the stock market slipped. It was not immediately clear who could form the next government, given no one has a clear majority in Parliament, or whether elections could be held during the pandemic.

Malaysia's infections and fatality rates per million people are the highest in Southeast Asia. The decision is likely to be thrust into the hands of constitutional monarch King Sultan Abdullah, who can appoint a prime minister from among elected lawmakers based on who he thinks is most likely to command a majority.

Muhyiddin, who had for weeks defied calls to quit, had informed party members that he would submit his resignation to the king on Monday, according to Mohd Redzuan Md Yusof, a minister in the prime minister's department, news portal Malaysiakini reported on Sunday. The minister did not respond to a request for comment.

The prime minister convened a special Cabinet meeting on Monday morning, state news agency Bernama reported. Reuters journalists saw Muhyiddin arrive at the national palace. His resignation could return the premiership to the United Malays National Organisation (UMNO), Malaysia's "grand old party," which was voted out in a 2018 election after being tainted by corruption allegations. The top two contenders for the premiership or interim prime minister's post include Senior Minister Ismail Sabri Yaakob and veteran lawmaker Tengku Razaleigh Hamzah, both from UMNO. Muhyiddin's grip on power has been precarious since he took office in March 2020 with a slim majority.

Pressure on him mounted recently after some UMNO lawmakers – the largest bloc in the ruling alliance – withdrew support. Muhyiddin had said the recent crisis was brought on by his refusal to meet demands including the dropping of corruption charges against some individuals. UMNO politicians, including former premier Najib Razak and party head Ahmad Zahid Hamidi, are facing graft charges. They have denied wrongdoing and were among those who withdrew support for Muhyiddin this month.