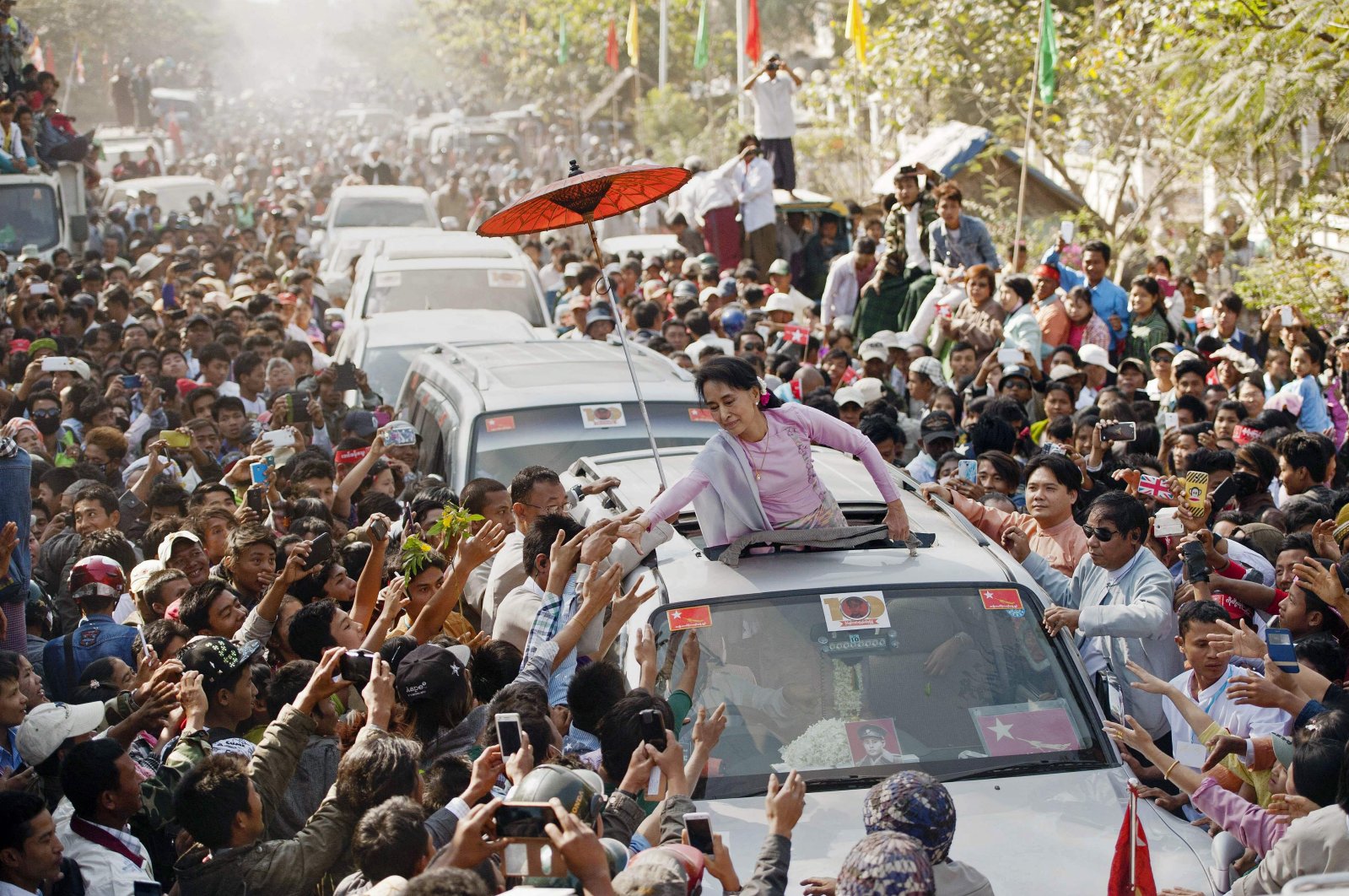 Myanmar's civilian leader Aung San Suu Kyi, who was ousted in a de facto coup this year, was convicted on two charges Monday and handed a four-year sentence that was quickly cut in half – in proceedings widely criticized as a further effort by the country's military rulers to roll back the democratic gains of recent years.

They serve to cement a dramatic reversal of fortunes for the Nobel Peace laureate, who spent 15 years under house arrest for resisting the Southeast Asian nation's generals but then agreed to work alongside them when they promised to usher in democratic rule.

Monday’s verdict was the first in a series of cases brought against 76-year-old Suu Kyi since her arrest on Feb. 1, the day the army seized power and prevented her National League for Democracy party from starting a second term in office.

If found guilty of all the charges she faces, Suu Kyi could be sentenced to more than 100 years in prison. She is being held by the military at an unknown location – and state television reported that she would serve her sentence there.

That sentence was reduced hours after it was handed down in what the report said was an amnesty ordered by the country's military leader, Senior Gen. Min Aung Hlaing.

The court earlier offered a 10-month reduction in the sentence for time served, according to a legal official, who relayed the verdict to the Associated Press (AP) and who insisted on anonymity for fear of being punished by the authorities. The state TV report did not mention any credit for time served.

The army seized power claiming massive voting fraud in the November 2020 election, which Suu Kyi's party won in a landslide. Independent election observers did not detect any major irregularities.

Opposition to the takeover sprang up almost immediately and remains strong, with armed resistance spreading after the military's violent crackdown on peaceful protests. Monday's verdicts could inflame tensions even further.

The cases against Suu Kyi are widely seen as contrived to discredit her and keep her from running in the next election.

United Nations High Commissioner for Human Rights Michelle Bachelet called the proceedings a “sham trial,” while Amnesty International said it was “the latest example of the military’s determination to eliminate all opposition and suffocate freedoms in Myanmar.”

Phil Robertson, deputy Asia director for Human Rights Watch, said the trial was just the beginning of a process that “will most likely ensure that Suu Kyi is never allowed to be a free woman again.”

The United States joined others in calling for the release of Suu Kyi and others who are detained.

“The regime’s continued disregard for the rule of law and its widespread use of violence against the Burmese people underscore the urgency of restoring Burma’s path to democracy,” Secretary of State Antony Blinken said in a statement, using a former name for Myanmar.

As is typical, China, a neighbor that has maintained friendly ties with Myanmar’s military leaders, declined to criticize the verdict.

Suu Kyi is widely revered at home for her role in the country's pro-democracy movement – and was long viewed abroad as an icon of that struggle, epitomized by her 15 years under house arrest.

But since her release in 2010, she has been heavily criticized for the gamble she made: showing deference to the military while ignoring and, at times, even defending rights violations – most notably a 2017 crackdown on Rohingya Muslims that rights groups have labeled genocide.

While she has disputed allegations that army personnel killed Rohingya civilians, torched houses and raped women, and she remains immensely popular at home, that stance has tarnished her reputation abroad.

On Monday, she faced an incitement charge that centered on statements posted on her party's Facebook page after she and other party leaders were detained by the military. She was accused of spreading false or inflammatory information that could disturb public order. In addition, she was accused of violating coronavirus restrictions for her appearance at a campaign event ahead of the elections last year.

Suu Kyi’s trials are closed to the media and spectators, and her lawyers, who had been a source of information on the proceedings, were served with gag orders in October forbidding them from releasing information.

Defense lawyers are expected to file appeals in the coming days for Suu Kyi and two colleagues who were also convicted Monday, the legal official who relayed the verdict said. They have argued that Suu Kyi and a co-defendant, former President Win Myint, could not be held responsible for the statements on which the incitement charge was based because they were already in detention when the statements were posted.

Win Myint's sentence was reduced along with Suu Kyi's.

February’s seizure of power was met by nonviolent nationwide demonstrations, which security forces quashed with deadly force. They have killed about 1,300 civilians, according to a detailed tally compiled by the Assistance Association for Political Prisoners.

Amid the severe crackdown on peaceful protests, armed resistance has grown in the cities and countryside, to the point that U.N. experts have warned the country is sliding into civil war.

Protest marches on Sunday against the military government called for the release of Suu Kyi and others.

On Sunday morning, five people were killed and at least 15 arrested after Myanmar security forces in a car plowed into an anti-coup protest in Yangon.

Decisions in other cases against Suu Kyi are expected next week. Other cases against her include the alleged unregistered import and use of walkie-talkies by her security guards; a violation of the Official Secrets Act, in which jailed Australian economist Sean Turnell is a co-defendant; and corruption charges.

The military-appointed election commission has also announced it intends to prosecute Suu Kyi and 15 other senior political figures for alleged fraud in the last election, which could result in her party being dissolved.

The military says its takeover was lawful and not a coup because the 2008 constitution – implemented under military rule – allows it to take control in certain emergencies. It argues that the 2020 general election contained widespread irregularities and thus constituted such an emergency.

The state election commission and independent observers have disputed that there was substantial fraud. Critics also assert that the takeover bypassed the legal process for declaring an emergency.