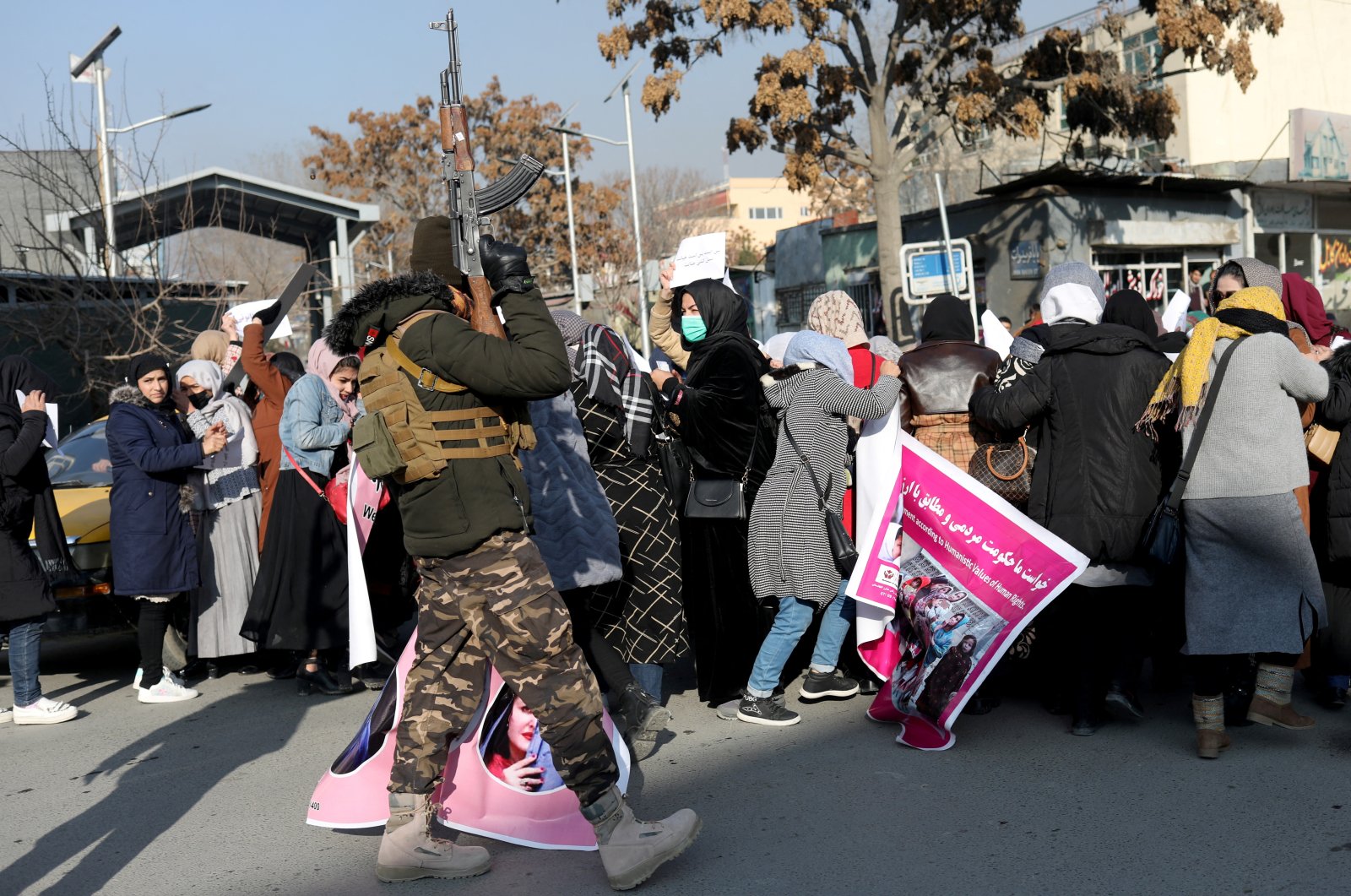 A member of the Taliban fires in the air to disperse a group of Afghan women during a rally to protest against the Taliban's restrictions on women in Kabul, Afghanistan, Dec. 28, 2021. (Reuters Photo)
by Agencies Dec 28, 2021 3:00 pm
RECOMMENDED

The Pakistani government has criticized the Taliban administration in Afghanistan by denouncing the ultra-conservative group's new travel restrictions on women.

"Women can’t travel alone or go to schools and colleges ... this kind of retrogressive thinking is dangerous," Pakistan's Information Minister Fawad Chaudhry said late Monday. "This extremism can spill over into Pakistan and beyond," the minister said in the capital Islamabad.

His comments come after Taliban authorities said Sunday that women seeking to travel long distances should not be offered transport unless they are accompanied by a close male relative. The Taliban have set up a ministry for the "propagation of virtue and the prevention of vice," which issued the guidelines and also called on all vehicle owners to offer rides only to those women who wear the hijab.

Chaudhry's remarks appear to be the first-ever direct and public criticism of the group by Pakistan. The Taliban have been seeking global legitimacy for their interim government since they swept to power in August.

Pakistani leaders, including Prime Minister Imran Khan, have since been praising the Taliban and staying silent on the harsh new reality for women in the country, including restrictions to access education and employment opportunities.

A Pakistani region bordering Afghanistan has seen a major increase in terrorist attacks this year, a trend officials and experts attribute to the fall of Kabul to the Taliban.

Terrorism incidents in Balochistan increased by more than 90% in 2021 as compared to the previous year, according to a home department official from the southwestern province.

According to the data, at least 137 terrorist incidents were reported in 2021, resulting in the deaths of more than 130 people, including security forces.

Militants and Baloch separatist groups, who are allegedly operating from lawless hideouts in Afghanistan, were behind the attacks in the province, he said.

The Pakistani Taliban, or Tehreek-e-Taliban Pakistan (TTP), has carried out hundreds of attacks after the Taliban took over in Afghanistan. The group has claimed responsibility for at least 16 attacks in the country since the end of a monthlong cease-fire on Dec. 10.

Balochistan is Pakistan's largest and most volatile province. It borders both Afghanistan and Iran, and is regularly targeted by extremists, sectarian groups and sub-nationalist rebels.

Much of the violence is seen as a reaction from rebels to Beijing's investment plans in the region, an attempt to link China's Xinjiang province with the Arabian Sea in Balochistan with a network of roads and rails.

Attacks targeting law enforcement agencies and workers from other provinces, especially those working on projects initiated by China under a $62 billion investment plan, are common in Balochistan.

A crowd of women marched through Kabul on Tuesday, accusing Taliban authorities of covertly killing soldiers who served the former U.S.-backed regime. Around 30 women gathered near a mosque in the center of Kabul and marched a few hundred meters chanting "justice, justice" before they were stopped by Taliban forces, Agence France-Presse (AFP) reported.

The Taliban also tried to prevent journalists from covering the march, organized against the "mysterious murders of young people, particularly the country's former soldiers," according to social media invitations.

Taliban fighters briefly detained a group of reporters and confiscated equipment from some photographers, deleting images from their cameras before returning them.

Since the group returned to power in August, they have effectively banned unsanctioned protests and frequently intervene to block demonstrations.

The protest comes weeks after separate reports by the United Nations, Amnesty International and Human Rights Watch (HRW) said there were credible allegations of more than 100 extrajudicial killings by the Taliban since their takeover.

"I want to tell the world, tell the Taliban to stop killing. We want freedom, we want justice, we want human rights," said protester Nayera Koahistani.

In a statement read aloud by protester Laila Basam, the demonstrators called on the Taliban "to stop its criminal machine."

The statement said former soldiers and government employees of the old regime are "under direct threat," violating a general amnesty announced by the Taliban in August.

The protesters also aired objections to the ratcheting restrictions women are facing under Taliban rule. "Women's rights are human rights. We must defend our rights," said Koahistani.

Video footage posted online Tuesday showed another women's protest held elsewhere in the capital that also called for women to be allowed education and work opportunities.