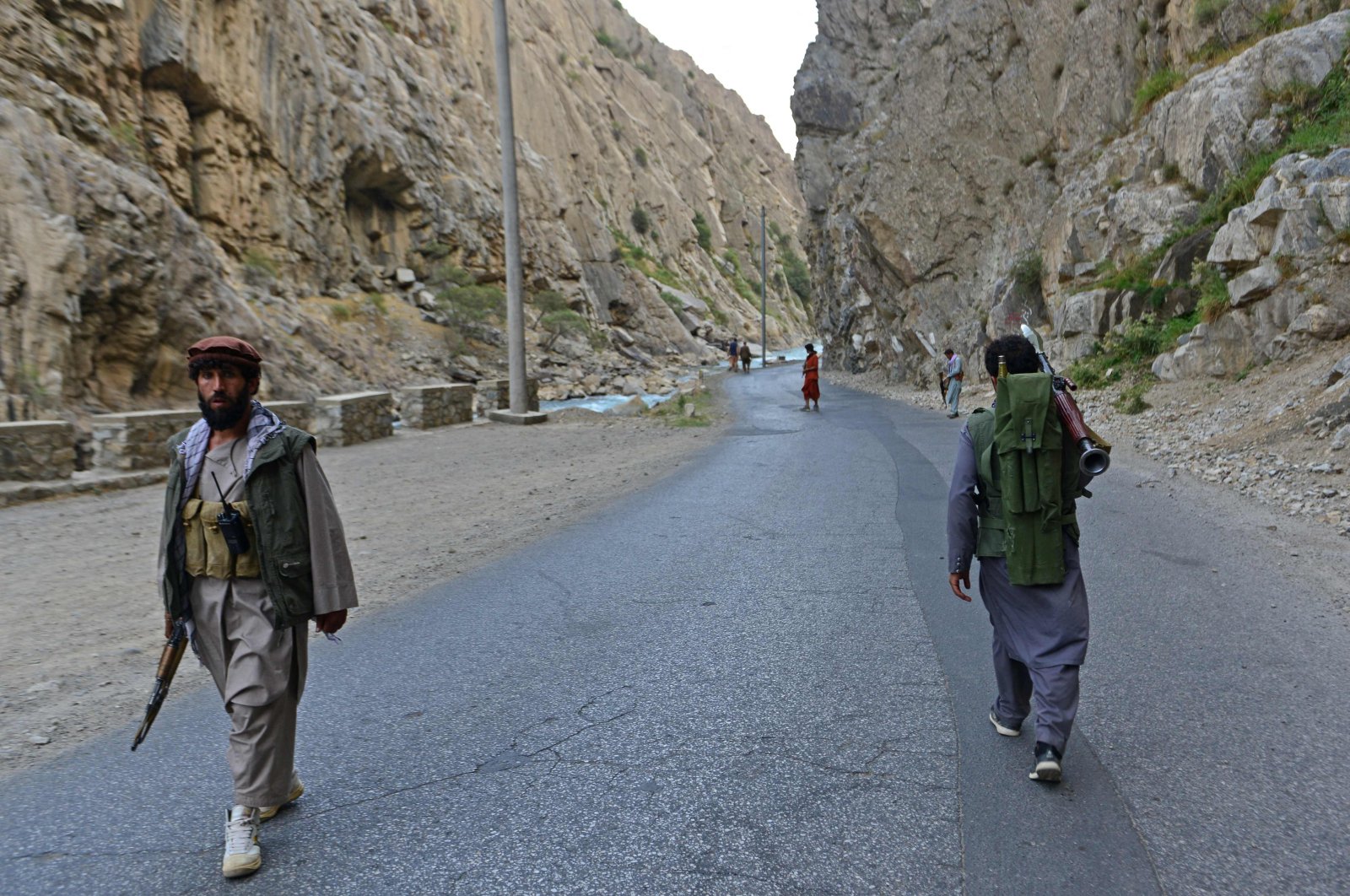 The Taliban on Tuesday fired shots into the air to disperse crowds who had gathered for an anti-Pakistan rally in the capital, the latest protest since the hard-line movement swept to power last month as concerns for Panjshir residents grow after militants claimed that they seized the last opposition holdout.

At least 70 people, mostly women, rallied outside the Pakistani embassy on Tuesday, holding banners and chanting against what they said was meddling by Islamabad, who has long been accused of having close ties to the Taliban movement. The Taliban have yet to announce a government, but Afghans – fearful of a repeat of the group's previous brutal reign between 1996 and 2001 – have staged small, isolated demonstrations in cities including the capital Kabul, Herat and Mazar-i-Sharif.

Pakistan's intelligence chief Faiz Hameed was in Kabul at the weekend, reportedly to be briefed by his country's ambassador but is likely to have also met with Taliban officials. The Agence France-Presse (AFP) staff witnessed Taliban members firing shots into the air to disperse the crowds. The previous day, a small group of women in the northern city of Mazar-i-Sharif gathered in a protest for their rights. Defiant women also came together in Herat last week demanding they be allowed to participate in the new government.

Tuesday's demonstration comes after the Taliban claimed total control over Afghanistan a day earlier, saying they had won the key battle for the Panjshir Valley.

The Taliban had struggled to take control of Bazarak, the capital of the Panjshir province of Afghanistan, due to its rough terrain of snake-shaped curving, narrow roadways with harsh rocky mountains on one side and the Panjshir River on the other. Dozens of rusted tanks in Jablus Siraj in the Parwan province and in Bazarak left by the former Soviet Union during a decadelong fight against the "mujahideen of Panjshir" illustrates how difficult it is to capture the valley.

But the Taliban did it for the first time on Monday, when they stormed from all sides to Bazarak, a small town about the size of one of Kabul neighborhood, but the capital of Panjshir province.

A broken tank and several burned and damaged Humvees indicate the heavy artillery fighting was intense between the Taliban and the Panjshir resistance group led by Ahmad Massoud, son of mujahideen leader Ahmad Shah Massoud, Amrullah Saleh, and Bismillah Mohammadi, respectively, the first vice president and defense minister in Ashraf Ghani's government. Before approaching Bazarak, a person was being buried, and several shops and houses with broken windowpanes showed evidence of public property damage.

Panjshir is the valley where Ahmad Shah Massoud, titled "Lion of Panjshir" by locals, fought the former Soviet Union army from 1979 to 1989 and resisted letting the Taliban take control of the valley during their rule from 1996 to 2001. Other northern provinces’ commanders, including those in Jawazjan, Faryab, Takhar and Badakhshan benefited from the valley commander's support in fighting the Taliban. Now the Panjshir has fallen for the first time, not to foreign forces, but to the Taliban.

With a long-distance walkie-talkie in one hand and an AK-47 on his shoulder, a commander said, "Some of the fighters entered midnight and some on Monday morning.”

The commander, who did not want to be identified, told Anadolu Agency (AA) in Bazarak that all of the Panjshir resistance group fighters, which he called "rebels," escaped to the mountains, and Taliban fighters are pursuing them.

Only one Taliban was killed, but they have killed many from the resistance group, according to the commander, who did not specify how many people were dead. He denied, however, that the resistance group inflicted considerable damage on the Taliban during a five-day battle with heavy weaponry that began just after the U.S. withdrew its troops from Afghanistan after 20 years of operations.

During a conversation with AA, the sound of gunfire on the hills signaled that the situation was far from ending.

"We're trying to persuade them to surrender because our leadership has declared general amnesty,” he continued, warning them that "if they don't, things will get difficult for them."

On Monday, Massoud called for a "national uprising" against the Taliban. He declared in an audio message that the resistance against the Taliban will continue, and that no force could defeat the people's will, according to him. He said that the resistance group in Panjshir has halted fighting at the request of religious scholars, blaming the Taliban for ignoring them and continuing their attacks. Some members of Massoud's family were also killed in a clash with the Taliban in Panjshir on Sunday, Massoud said.

"Panjshir which was the last hideout of the escapee enemy, is captured," Mujahid told a news conference. Massoud did not concede defeat, saying his force, drawn from the remnants of the regular Afghan army as well as local militia fighters, was still fighting.

"We are in Panjshir and our Resistance will continue," he said on Twitter.

People were seen leaving Bazarak in vehicles, some waiting for transportation, and some even walking with their children. Markets were shuttered and houses were empty, indicating that ordinary people were permitted to flee the battleground. Some shops, however, were opened in two other districts. Taliban leaders told AA that they will try to persuade the resistance group to return to their homes and start their normal lives. For several days, there has been no food supply, electricity, telephone or internet services.

It is tough to live without water, according to a Taliban fighter named Hizbullah, who asked his co-fighters to fetch water from the Panjshir River as quickly as possible. He claimed that before departing the capital city, the resistance group destroyed the whole water supply system, as well as the computer systems in the administrative offices, and left nothing behind. According to Hizbullah, they tore down important official documents and burned some of them.

Two helicopters were stationed at the city's sports center and a large number of armored vehicles were seen speeding around the road. Local media used a video released by the Taliban showing a huge number of weapons seized by them from the resistance group.

In the video, 30 resistance group commanders and 200 men were shown surrendering to the Taliban. A Taliban fighter in the video reiterated his supreme leader's amnesty and stated that they are free to live normal lives. The Taliban have assured the people of Panjshir that they will live in peace from now on, calling them their brothers and promising that the people of Panjshir will not be discriminated against in any way.

Inside Afghanistan, drought and war have forced about 5.5 million people to flee their homes, including more than 550,000 newly displaced in 2021, according to the U.N.-affiliated International Organization for Migration (IOM).

Western powers say they are prepared to send humanitarian aid, but broader economic engagement would depend on the makeup of the new government in Kabul.

China's ambassador to Afghanistan promised to provide humanitarian aid during a meeting with senior Taliban official Abdul Salam Hanafi in Kabul on Monday, Tolo news reported. China has not officially recognized the Taliban as Afghanistan's new rulers, but Chinese State Councilor and Foreign Minister Wang Yi last month hosted Abdul Ghani Baradar, chief of the group's political office, and has said the world should guide the new government rather than pressure it.