Strike launched in Myanmar against coup, despite lethal threats 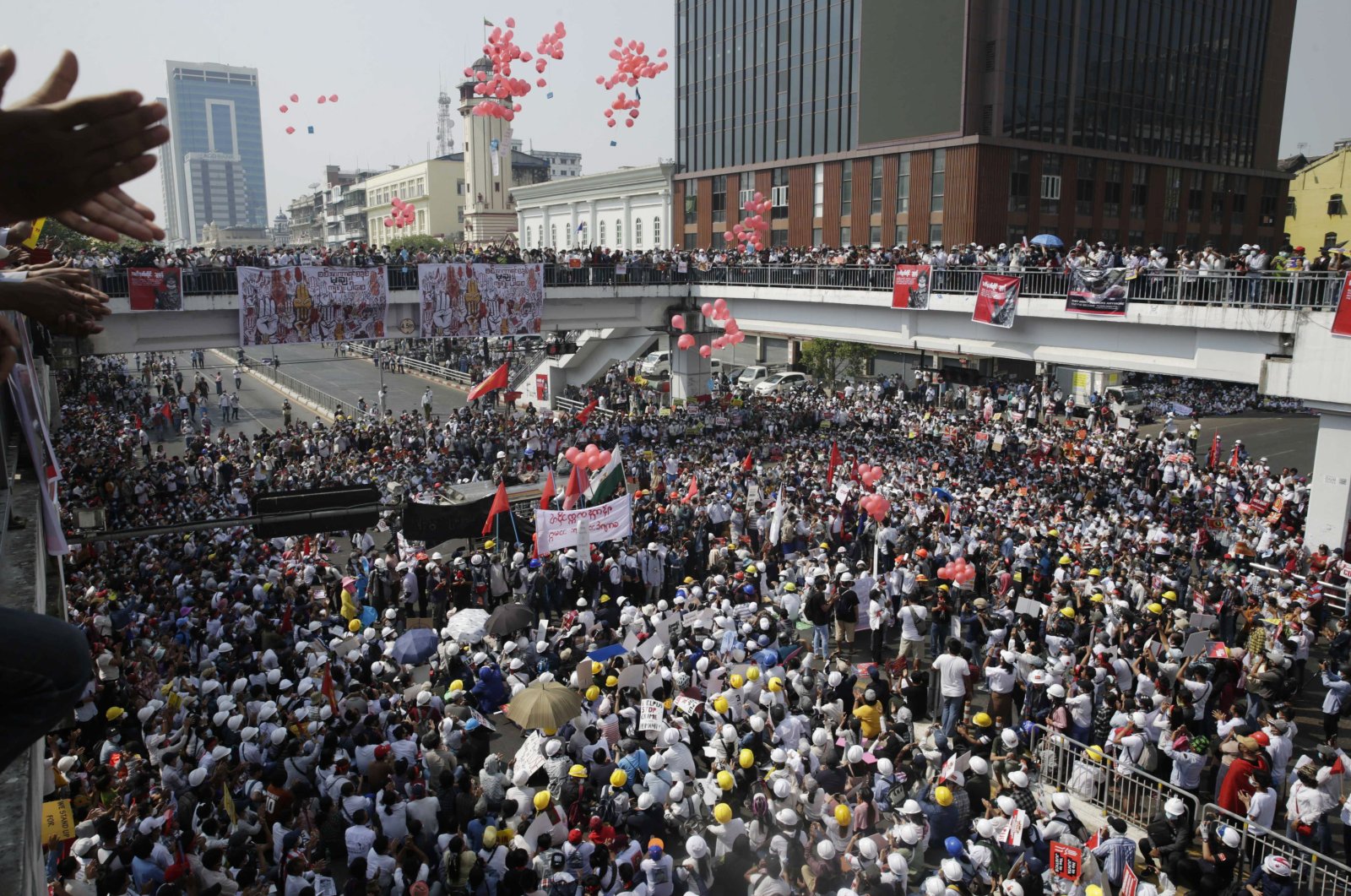 Businesses in Myanmar shut their doors on Monday in a general strike called to oppose the military coup, and thousands of protesters gathered in towns and cities despite a chilling message from the junta that confrontation would cost more lives.

On Sunday, hundreds of people gathered in the capital Naypyitaw to attend the funeral of Mya Thwate Thwate Khaing, a young woman who became a symbol of resistance after being shot in the head on Feb. 9 while protesting.

On Saturday, two more protesters were killed when police opened fire in the city of Mandalay, marking the bloodiest day in the campaign for the restoration of democracy.

Yet, three weeks after seizing power, the junta has failed to stop daily protests and a civil disobedience movement calling for the reversal of the Feb. 1 coup and release of elected leader Aung San Suu Kyi.

"Everyone is joining this," said San San Maw, 46, at the Hledan junction in the main city of Yangon, which has become a rallying point for the protests. "We need to come out."

"Protesters are now inciting the people, especially emotional teenagers and youths, to a path of confrontation where they will suffer loss of life," it said.

Htet Htet Hlaing, 22, said she was scared and had prayed before joining Monday's demonstration but would not be discouraged.

"We don’t want the junta; we want democracy. We want to create our own future," she said. "My mother didn't stop me from coming out; she only said 'take care.'"

In a country where dates are seen as auspicious, protesters noted the significance of the date Feb. 22, 2021, comparing it with demonstrations on Aug. 8, 1988, when a previous generation staged anti-military protests which were bloodily suppressed.

The response of security forces this time has been less deadly. Aside from the three protesters who have been killed, the army has said one police officer died of injuries in protests.

The deaths in Mandalay did not discourage protesters on Sunday when they turned out again in tens of thousands there and in Yangon and elsewhere.

Author and historian Thant Myint-U said the window for a peaceful resolution was closing.

"The outcome of the coming weeks will be determined by just two things: the will of an army that's crushed many protests before and the courage, skill and determination of the protesters (much of society)," he said on Twitter.

Protesters were also out in various towns around the country including Myitkyina in the north, Bhamo near the Chinese border and in the central town of Pyinmana, according to media reports.

Authorities were "exercising utmost restraint," the foreign ministry said in a statement. It rebuked some countries for remarks it described as flagrant interference in Myanmar's internal affairs.

Several Western countries have condemned the coup and decried the violence against protesters.

U.S. Secretary of State Antony Blinken said on Twitter the United States would continue to "take firm action" against authorities violently cracking down on opponents of the coup in the Southeast Asian country which is also known as Burma.

"We stand with the people of Burma," he said.

Residents in Yangon said roads to some embassies, including the U.S. Embassy, were blocked on Monday. The diplomatic missions have become gathering points for protesters calling for foreign intervention.

U.N special rapporteur on human rights to Myanmar, Tom Andrews, said he was deeply concerned by the junta's warning to protesters.

"Unlike 1988, actions by security forces are being recorded and you will be held accountable," he said on Twitter.

The army seized power after alleging fraud in Nov. 8 elections that were swept by Suu Kyi's National League for Democracy (NLD), detaining her and much of the party leadership. The electoral commission dismissed the fraud complaints.

Myanmar's Assistance Association for Political Prisoners said 640 people have been arrested, charged or sentenced since the coup – including former members of government and opponents of the army takeover.