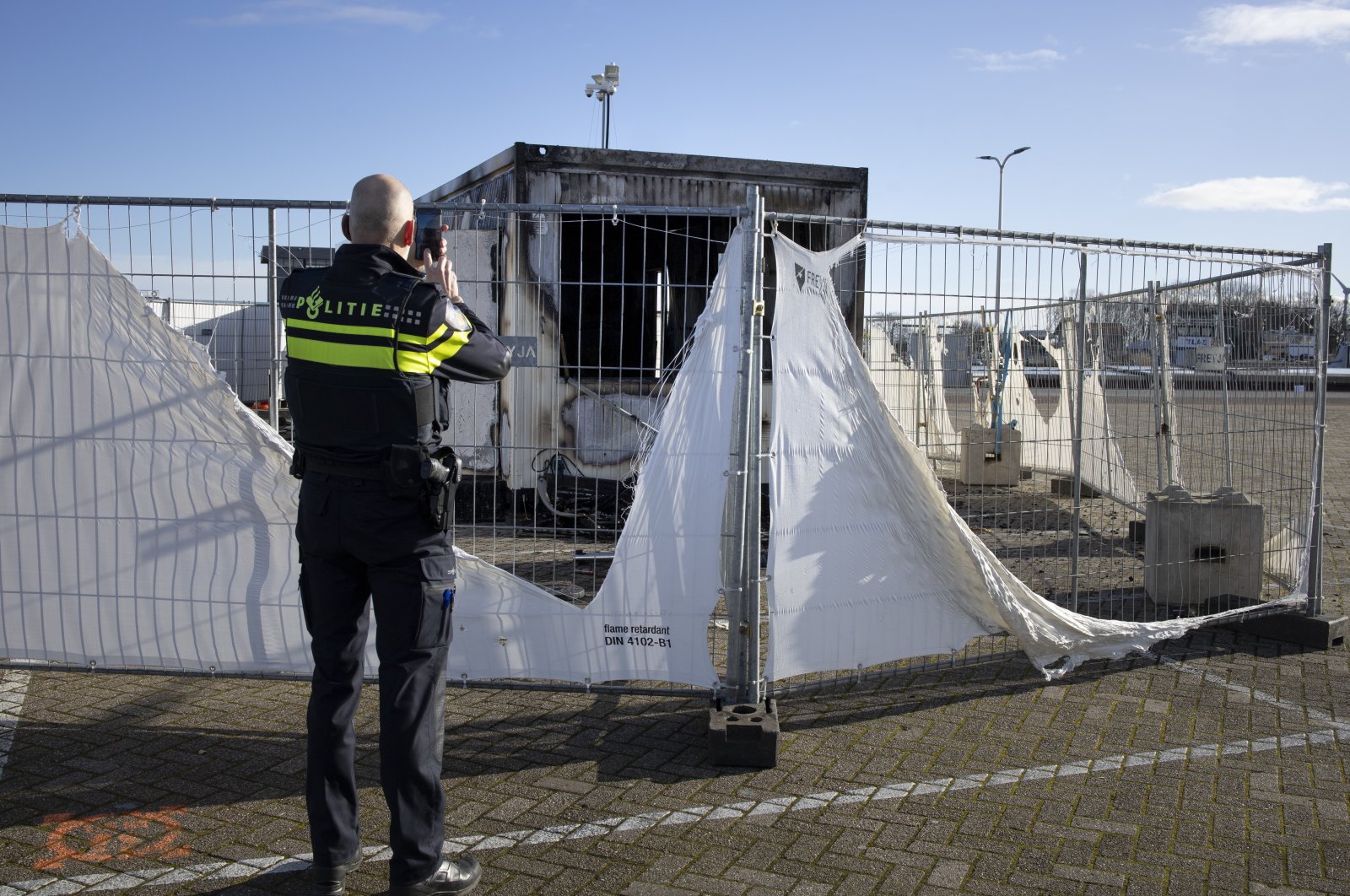 A police officer takes pictures of a destroyed COVID-19 testing facility in the fishing village of Urk in the Netherlands after it was set on fire the night before by rioting youths protesting on the first night of a nationwide curfew, Jan. 24, 2021. (AP Photo)
by ASSOCIATED PRESS
Mar 02, 2021 10:39 am

Two Nigerian nurses were attacked by the family of a deceased COVID-19 patient. One of the nurses suffered a fracture and had her hair pulled out while the other was beaten into a coma.

Following the assaults, nurses at Federal Medical Centre in the Southwestern city of Owo stopped treating patients, demanding the hospital improve security. Almost two weeks passed before they returned to work with armed guards posted around the clock.

“We don’t give life. It is God that gives life. We only care or we manage,” said Francis Ajibola, a local leader with the National Association of Nigeria Nurses and Midwives.

The attack in Nigeria early last month was just one of many on health workers globally during the COVID-19 pandemic. A new report by the Geneva-based Insecurity Insight and the University of California, Berkeley’s Human Rights Center identified more than 1,100 threats or acts of violence against health care workers and facilities last year.

Researchers found that about 400 of those attacks were related to COVID-19, many motivated by fear or frustration, underscoring the dangers surrounding health care workers at a time when they are needed most. Insecurity Insight defines a health care attack as any physical violence against or intimidation of health care workers or settings, and uses online news agencies, humanitarian groups and social media posts to track incidents around the world.

“Our jobs in the emergency department and in hospitals have gotten exponentially more stressful and harder, and that’s at baseline even when people are super supportive,” said Rohini Haar, an emergency physician in Oakland, California, and Human Rights Center research fellow. “To do that work and to do it with commitment while being attacked or with the fear of being attacked is heartbreaking to me.”

Medical professionals from surgeons to paramedics have long confronted injury or intimidation on the job, especially in conflict zones. Experts say many attacks are rooted in fear or mistrust, as family members react to a relative’s death or a community responds to uncertainty around a disease. The coronavirus has amplified those tensions.

Ligia Kantún has worked as a nurse for 40 years in Mexico and never felt threatened until last spring. As she was leaving a hospital in Merida in April, she heard someone shout the word “Infected!” She was drenched in hot coffee before she could turn around.

“When I got home 10 minutes later my daughter was waiting for me and I hugged her crying, all scared, thinking, ‘How is it possible that they have done this to me?’” she told The Associated Press (AP).

Kantún said many people in Mexico at the time thought health workers wore the same uniforms in public that they wore when treating coronavirus patients. “That ignorance was what made them act that way,” she said.

Researchers saw the most attacks last spring and summer as the coronavirus swept across the globe. Yet recent events from Nigeria to the Netherlands, where in January rioters set fire to a coronavirus testing center, prove the threat remains.

Haar said she expected health care workers to be widely celebrated for their lifesaving work during the pandemic, just as Italians sang tributes to doctors during the lockdown.

“But actually that didn’t happen in many, many places,” she said. “There’s actually more fear, more distrust, and attacks grew rather than decreased.”

Many attacks may have gone undetected because they are never reported to police or in the media. Insecurity Insight scrambled to expand its monitoring as a flood of attacks were detected in countries that have traditionally been safe for health workers, said director Christina Wille.

In the United States, for example, researchers counted about a dozen threats to health care workers last year. Several incidents involved the injury or arrest of street medics during Black Lives Matter protests.

“I think in the U.S. the culture has been more of trusting health workers,” Haar, the emergency physician, said. “There hasn’t been a longstanding conflict where there’s been a dissonance between health workers and the community.”

Yet health workers in the U.S. are still subject to great risk. Hospital employees in the U.S. are nearly six times as likely as the average worker to be the victim of an intentional injury, according to the Bureau of Labor Statistics, and last month a Minnesota medical assistant was killed during a shooting at a clinic by a former patient unhappy with his treatment.

Misinformation has spurred violence in some cases. Wille said her team looked closely at social media postings in April after three Ebola treatment centers were ransacked in the Democratic Republic of Congo.

“We could actually see that there was a build-up over several days of misinformation about what they call the ‘Ebola business,’ that this was all related to people inventing the disease,” she said.

Experts say that even though health workers are in many cases the target of attacks, entire communities suffer when they lose access to medical care after a clinic or medical facility is forced to close due to threats.

“You’re robbing the community of the service they would have provided,” said Nyka Alexander, who leads the World Health Organization’s communications on health emergencies.

With or without a pandemic, the most dangerous places for health workers are often areas of conflict and political upheaval. Last year, hundreds of threats and acts of violence were tracked in Syria, Afghanistan, Yemen and the Democratic Republic of Congo.

Naser Almhawish, surveillance coordinator for Syria’s Early Warning Alert and Response Network, said he faced threats several times while working as a doctor in the city of Raqqa. He recalled the day in 2012 at Ar-Raqqa National Hospital when armed men confronted him in the middle of an operation, saying they’d kill him if the patient died.

“You just freeze and you know that you are working and you are trying to save this guy,” he said. “This is our duty. I didn’t ask if this guy was a military, civilian or anything. He’s a human being who needed an operation.”

Almhawish said such attacks on health care settings in Syria had waned in the last year. Researchers said declining violence in the country was the reason they didn’t see a greater surge in total health care attacks in 2020.

Kantún, the nurse in Mexico, said she went almost eight months after the attack last April without wearing her nursing scrubs in public. Now, one year into the pandemic, she feels health workers are more respected. But she still worries.

“I’ve had that fear of going out and finding my car scratched, or my car window broken,” she said. “I do have that fear, since I lived it.”