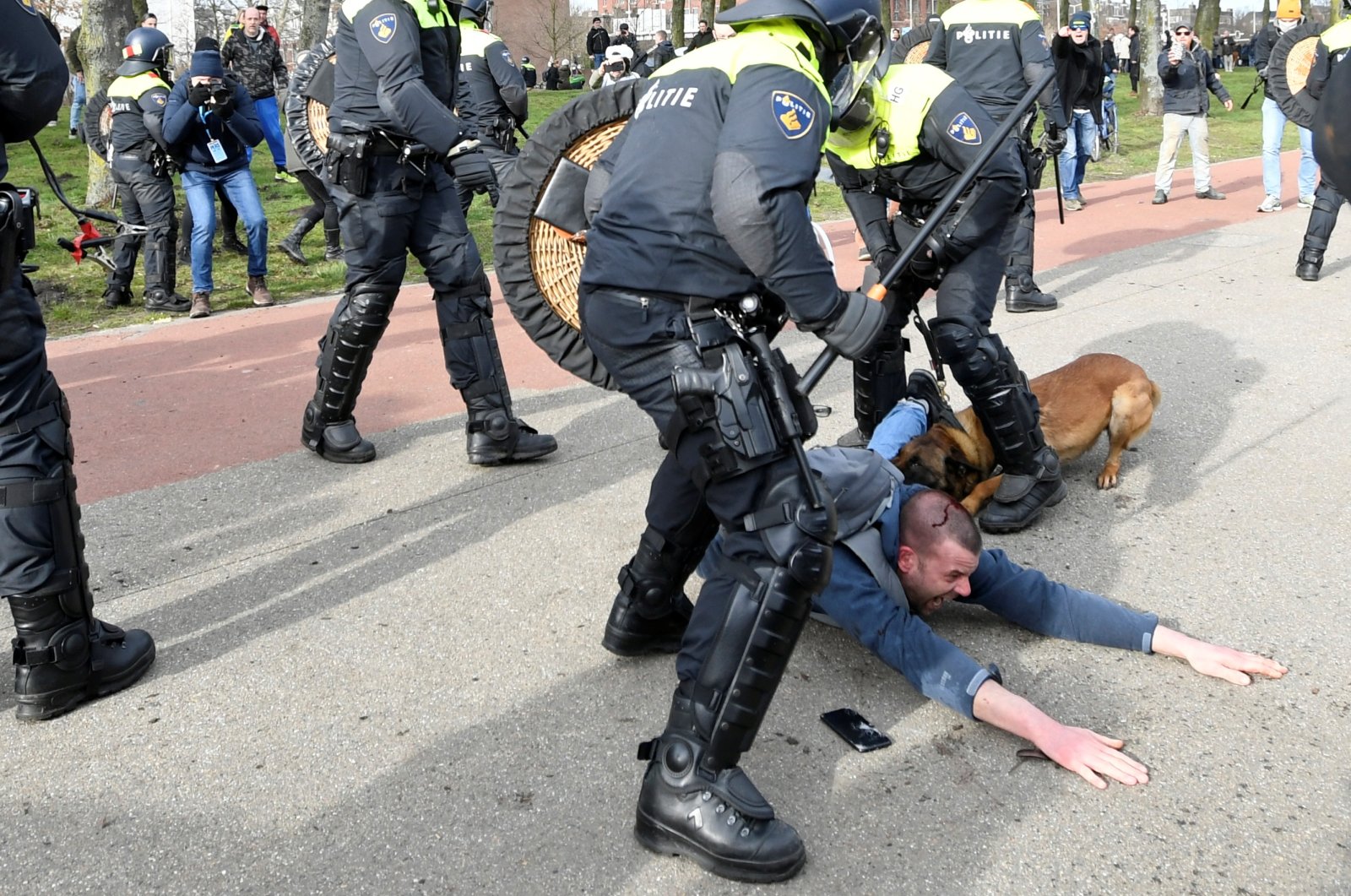 A demonstrator is bitten by a police dog while fighting with police during a protest against the coronavirus disease (COVID-19) restrictions in The Hague, Netherlands, March 14, 2021. (Reuters Photo)
by French Press Agency - AFP Mar 15, 2021 10:53 am
RECOMMENDED

Dutch police used water cannons and horses to clear anti-government protesters in The Hague Sunday, the day before three days of voting starts in national elections.

Hundreds of demonstrators rallied in a park in the center of the city against Prime Minister Mark Rutte, with some also criticizing the coronavirus restrictions his government has put in place.

"Today it's mainly because we have elections next week and we don't want the same government again," Elsvis Vanheenst, 32, who is unemployed, told AFP.

"Because they are lying about everything and they are only working for themselves, and not for the people. So that's mainly why I'm here today."

Riot police with shields, batons and dogs moved in after some of the protesters refused to leave at the scheduled end of the protest, detaining a number of them.

Police on horseback then charged at the demonstrators, few of whom wore masks.

Police finally fired water cannon but many of the demonstrators sheltered underneath yellow umbrellas from the spray. The yellow umbrellas have been a feature at several anti-lockdown protests.

The Hague police later also confirmed a "warning shot" was fired and said the cause was being investigated.

The Netherlands goes to the polls on Monday, Tuesday and Wednesday in elections seen as a verdict on Rutte's handling of the coronavirus pandemic.

Polling has been spaced over three days to ensure social distancing and allow COVID-19-vulnerable people a chance to vote early.

Rutte and his liberal People's Party for Freedom and Democracy (VVD) are on course to win a fourth term at the head of a coalition government, according to opinion polls.

He has been in power for more than a decade and is one of Europe's longest-serving leaders.

However, anger at the imposition of the country's first curfew since World War II in January led to the worst riots the Netherlands has seen for decades.

The Netherlands has seen a string of anti-lockdown demonstrations, and populist parties have been calling for a relaxation of the rules, the strictest since the start of the pandemic.

Bars and restaurants remain closed, non-essential shops are closed except by appointment, and the 9 pm-4:30 am curfew is in place until at least March 31.

Protesters at the demonstration in The Hague carried placards with slogans including "Born to be Free" and "Emergency Law is Dictatorship."

"There might be a virus, but the shutdown of the total society is not proportional," he added.

"I see that a lot of our rights are easily taken away and the majority of the people don't even notice but there's a lot going on. So I'm concerned for my grandchildren."