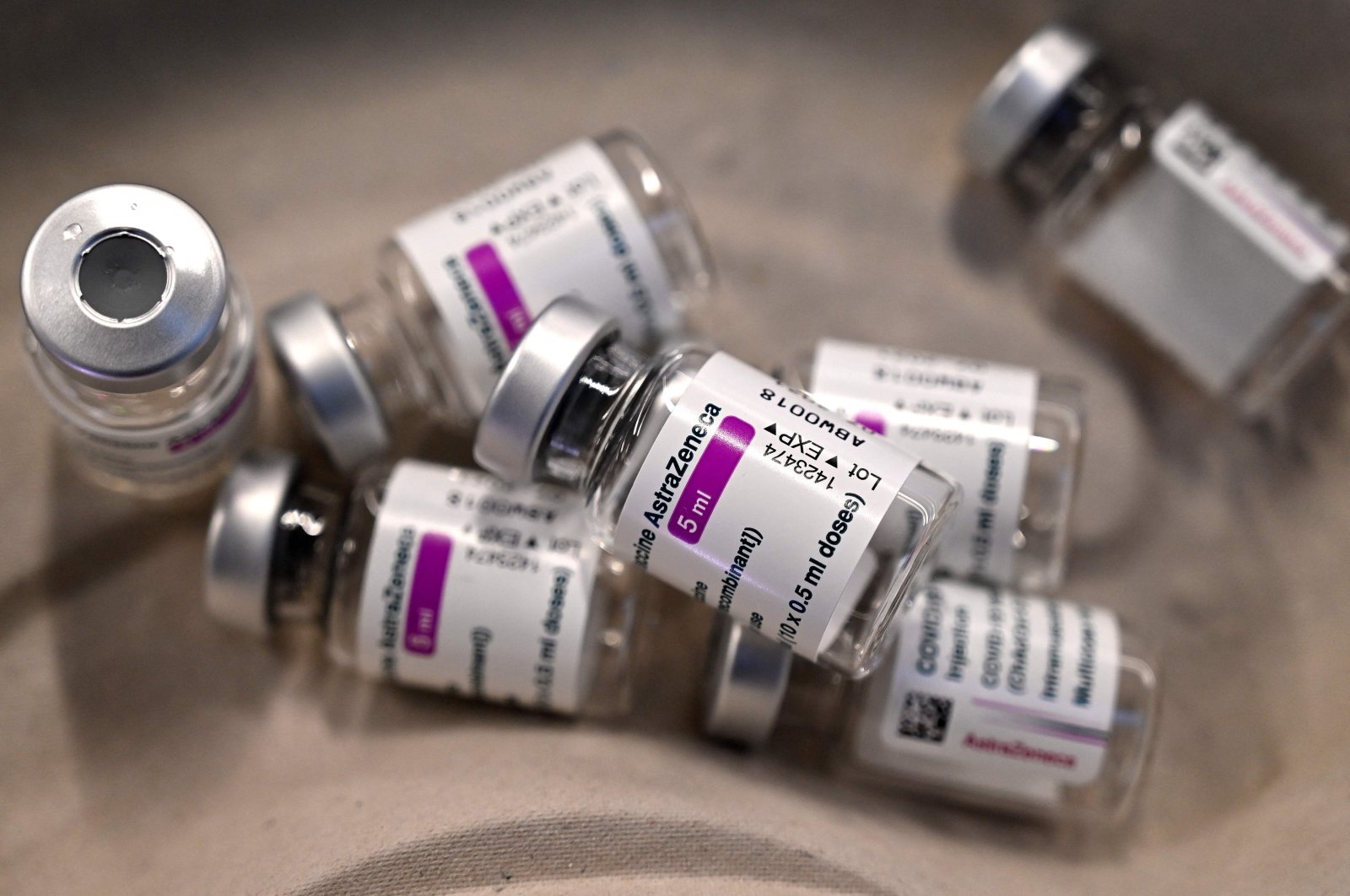 Used vials of the AstraZeneca/Oxford vaccine are pictured at a COVID-19 vaccination center at at the Wanda Metropolitano stadium in Madrid, Spain, March 24, 2021. (AFP Photo)
by Reuters Mar 24, 2021 6:54 pm
RECOMMENDED

AstraZeneca said Wednesday that some 29 million doses of COVID-19 vaccines found in an inspection at a plant in Italy, which made the company's already tense relationship with the EU even more problematic, were destined for European nations and for donations to poorer countries via the COVAX scheme co-led by the World Health Organization.

At the request of the European Commission, Italian security forces inspected a Catalent factory in Anagni, near Rome, at the weekend and found the store of vaccine doses, according to Italian newspaper La Stampa. An Italian official later confirmed the report of the inspection and said the doses were to be sent to Belgium.

A flurry of reactions to the report reflected the level of mistrust in the EU towards the Anglo-Swedish firm, which slashed its supply target to the EU by the end of June to 100 million from 300 million envisaged in its contract with the 27-nation bloc. The 29 million doses found would be enough to vaccinate 14.5 million people.

"A stock of almost 30 million doses has been identified near Rome during an inspection we put in place. It has now been seized," French government spokesman Gabriel Attal told reporters after a cabinet meeting. "The EU won't be the fall guy of vaccinations."

EU lawmaker Peter Liese, from the same party as German Chancellor Angela Merkel, said the report left him speechless, and he urged AstraZeneca to clarify the situation.

Later on Wednesday, AstraZeneca said that most of the doses in the Catalent plant were for the EU, and the rest were for poorer countries supplied by the COVAX scheme co-led by the WHO.

"There are no exports currently planned other than to COVAX countries. There are 13 million doses of vaccine waiting for quality control release to be dispatched to COVAX," the company said. The remaining 16 million will be shipped to Europe this month and in April, it said.

Mario Gargiulo, Regional Biologics President for Europe at Catalent, told Reuters that having 29 million doses in the Anagni factory was in line with normal procedure and that the company often had more there. The European Commission declined to comment on the doses at the Anagni factory.

Earlier on Wednesday, UNICEF said on behalf of the COVAX vaccine-sharing facility that the projected deliveries of vaccines to all countries, including Vietnam, had to be delayed due to production complications.

An EU official said some of the doses at the Catalent plant might have come from a vaccine factory in the Netherlands run by AstraZeneca's subcontractor Halix.

The Anagni plant is in charge of bottling AstraZeneca vaccines produced at the Halix factory and also at a plant in Belgium run by subcontractor Thermo Fisher Scientific.

AstraZeneca said that the factory also bottles doses received from outside the EU and to be shipped to COVAX countries.

Both vaccine-making factories in Belgium and the Netherlands are listed in the contract AstraZeneca signed with the EU in August as suppliers to the EU.

Vaccines produced there cannot be used in the EU until that approval is received, which AstraZeneca and EU officials said they expected in the coming days.

It is unclear why AstraZeneca did not seek earlier approval for the factory. The Anglo-Swedish drugmaker declined to comment on that point.

Halix is also listed as a supplier for Britain, which is urging the EU to allow the shipment of doses produced there. Britain has so far exported no AstraZeneca vaccines to the EU, despite two UK plants being listed in the EU contract as suppliers for the bloc, which contributed to the rising tensions between the island and the bloc as the EU threatened to block vaccine exports to the U.K.

Halix said it started producing vaccines for the EU in December and has a capacity to produce about 5 million doses per month. The company declined to comment on how many vaccines it had already produced or on its destination.