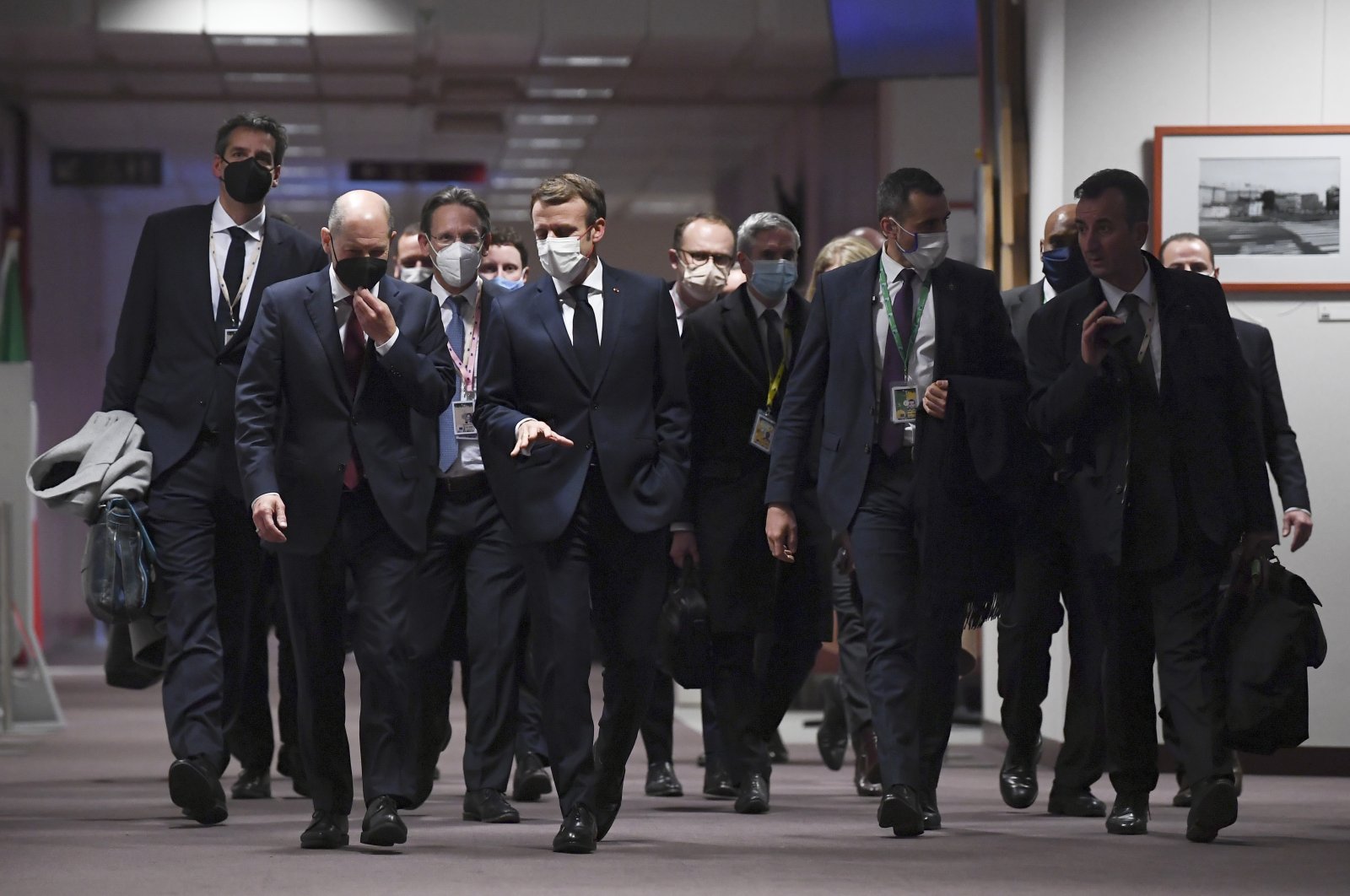 European Union leaders on Thursday pressed Russia to return to peace talks with Ukraine and renewed their threat to impose unprecedented sanctions on Moscow in tandem with the United States and Britain should Russian armed forces cross the border.

The EU’s call for a return to the negotiating table came as Russia said it had submitted draft documents to the U.S. outlining security arrangements that it wants to negotiate with Washington and its allies in the NATO military alliance. NATO is suggesting it might be willing to discuss them.

U.S. intelligence officials say Russia has moved 70,000 troops and is preparing for a possible invasion early next year. Moscow denies it has any plans to attack, as it did in 2014 when it annexed the Crimean Peninsula, but says it wants guarantees that Ukraine will never join NATO.

In a statement in Brussels, the EU leaders underlined "the urgent need for Russia to de-escalate tensions caused by the military buildup along its border with Ukraine and aggressive rhetoric.” They pledged their "full support for Ukraine’s sovereignty and territorial integrity.”

They said the EU "encourages diplomatic efforts and supports the Normandy format in achieving the full implementation of the Minsk Agreements,” in reference to French and German brokered talks between the two sides aimed at enforcing a 2015 peace deal.

The leaders repeated a message sent from the U.S., Britain and the Group of Seven (G-7) industrial nations in recent weeks that "any further military aggression against Ukraine will have massive consequences and severe cost in response, including restrictive measures coordinated with partners.”

The EU leaders agreed to renew for six months existing economic sanctions imposed on Russia in 2014 in response to its annexation of Crimea, a Ukrainian region. The U.S. has used similar language of "massive" retaliation in the event of a Russian invasion while attempting to reach out to Moscow to defuse the situation. NATO Secretary General Jens Stoltenberg branded Russia the "aggressor."

On Wednesday, Ukrainian President Volodymyr Zelenskyy attended a prior summit with EU leaders and said that most of them supported Ukraine's position in the conflict. But he is frustrated that European powers in particular have refused to take preventive action against Russia, preferring to threaten a response in the event of Russian aggression.

"Since 2014, since the start of the war, I believe that basically Russia pushed Ukraine into NATO," he said, according to remarks carried by Agence France-Presse (AFP). "Basically, I believe that today Russia itself is paving the difficult path of Ukraine to NATO."

He complained that, in his view, some EU members did not seem to have understood the extent of Ukraine's peril and urged them to act swiftly. Ukraine and its closest supporters in the West want to cancel the opening of the Nord Stream 2 pipeline, which will carry Russian gas supplies to Germany, bypassing Ukraine.

The EU is divided over when to hit Moscow with new sanctions. France and Germany want to hold fire, expressing concern that such action could bring on an attack and believing that a diplomatic solution can be found. Both countries' leaders underlined Thursday the importance of reviving the Normandy talks, making little headway this year.

"We have a very good format, the Normandy format, that we want to reactivate, reenergize," German Chancellor Olaf Scholz told reporters. "It won’t be easy, we should not be naive, and we should be very clear when it comes to the integrity of borders.”

France and Germany’s peace efforts in 2015 helped end large-scale hostilities in eastern Ukraine, where Ukrainian forces have been fighting Russia-backed separatists since 2014. But the conflict, which has left 14,000 dead, has simmered.

In contrast, countries on the EU’s eastern flank closer to Russia believe sanctions would work best as a deterrent and should be imposed immediately. Ukraine’s president wants more sanctions to be imposed before – instead of after – any possible incursion, but his plea has fallen on deaf ears.

Lithuanian President Gitanas Nauseda, whose country borders Russia, said the EU should not underestimate the threat the troop buildup poses. He warned that Moscow’s actions are creating one of the worst security situations since the collapse of the Soviet Union.

"I’m talking not only about Ukraine,” Nauseda said, stressing that the entire Baltic region and Poland should be concerned.

EU lawmakers said in a resolution that "any new sanctions package should include the Russian officer corps and flag officers involved in the planning of a possible invasion, as well as the immediate circle and oligarchs ‘in the orbit of the Russian President and their families.’”

According to The Associated Press (AP) they said it should involve "the freezing of financial and physical assets in the EU, travel bans, the exclusion of Russia from the SWIFT payment system” for international financial transfers, target key economic sectors and disrupt the financing of the intelligence services and the armed forces.

The lawmakers have no decision-making powers on sanctions, but their experts often have detailed knowledge of what member countries are thinking on joint foreign policy initiatives.

Meanwhile, the Kremlin again prodded Western leaders to provide legally binding guarantees that Ukraine would never join NATO or that its members' weapons would ever be deployed there, calling such moves a "red line” for Moscow.

The U.S. and its allies have refused to make such a pledge, but Putin and U.S. President Joe Biden agreed last week on further talks to discuss Russian concerns.