France goes ahead with Macron's COVID-19 pass despite protests 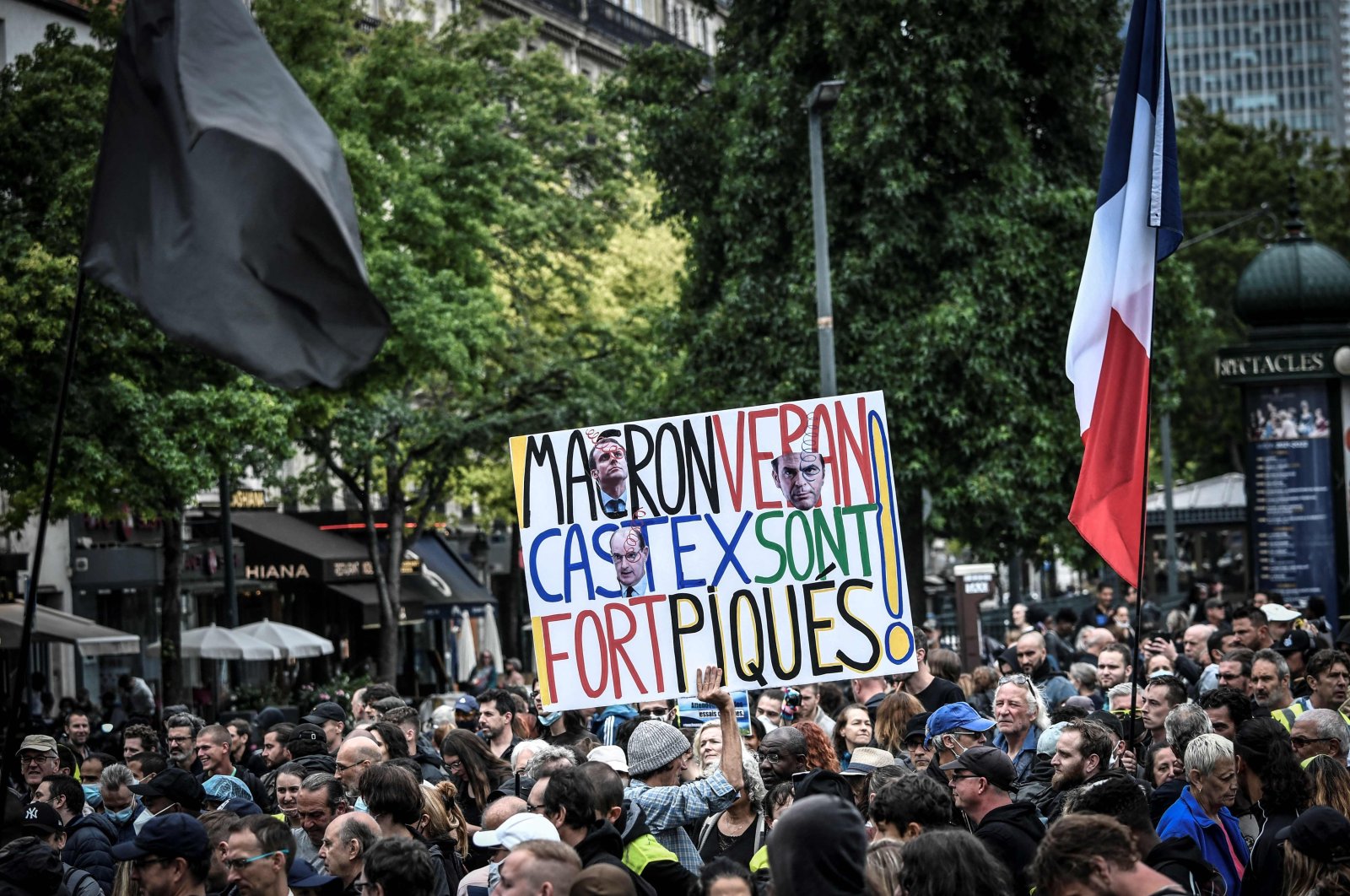 French activist Jean-Baptiste Redde also known as Voltuan holds a sign reading 'Macron, Veran, Castex are really stung' during a demonstration, part of a national day of protest against the mandatory Covid-19 health pass to access most of the public space, near the Pont de Neuilly in the western Paris suburb of Neuilly-sur-Seine, on August 7, 2021. (AFP Photo)
by Daily Sabah with AFP Aug 09, 2021 9:00 am
RECOMMENDED

People in France will, from Monday on, need to show a health pass to enjoy usually routine activities such as sipping a coffee in a cafe or traveling on an intercity train, in a plan championed by President Emmanuel Macron to squeeze COVID-19 infections and encourage vaccination.

The government is pressing ahead with the extension of an already-existing health pass to cafes, restaurants and intercity travel, despite four weekends of angry protests that saw almost a quarter of a million rally nationwide on Saturday.

Macron, who has expressed exasperation with the protests, hopes that the plan will help ramp up vaccinations and quell the fourth wave of COVID-10 in France in a strategy similar to that of other European neighbors such as Italy and Germany.

The health pass is generated in a QR code either by a full course of vaccinations, a recent negative virus test or a recovery from COVID-19. The government expects a one-week grace period for consumers and businesses to get used to the new rules.

Veran announced slight modifications in the rules – notably that tests could be 72 hours old and not 48, and also that self-tests carried out under medical supervision would be allowed.

But he emphasized there would be no going back on rules which will remain in place until at least November, lamenting the attention paid to those who are "anti-vax, anti-science and anti-state" over those who respected distancing and had been vaccinated.

"I am willing to hear the fears, do everything to reassure. But there comes a time when enough is enough," he said.

The numbers in hospitals are still way off previous highs seen in the pandemic, but there were 1,510 people in intensive care with COVID-19 on Saturday compared with 1,099 just one week ago.

The French government wants 50 million people to have received at least one jab by the end of August. Macron hopes the plan will further accelerate the vaccination drive in France, where over 55% are now double-jabbed. Aides have noted that almost seven million new bookings were made for first jabs since the plans were outlined.

Cases have been rising fastest in Corsica and the Mediterranean coast, which are seeing a summer influx of holidaymakers.

But the biggest concern is over France's overseas territories in the Indian Ocean and Caribbean, where new lockdowns have been ordered amid a slow vaccine uptake. Opponents argue the new rules encroach on civil liberties in a country where individual freedom is prized.

Opponents argue the new rules encroach on civil liberties in a country where individual freedom is prized.

About 237,000 people protested across France on Saturday, including 17,000 in Paris, the interior ministry said, exceeding the 204,000 recorded last weekend – numbers that are extremely unusual for protests at the height of the summer break.

Recent polls though have shown that a clear majority of French back the pass, even including the extension to cafes and restaurants.

The pass has already been required since July 21 to visit cultural venues such as cinemas, theaters and museums. Its extension was approved by France's Constitutional Council on Thursday.

It will be needed both in the indoor and outdoor areas of restaurants but will not be required on metro systems and suburban transport.

Macron, who faces reelection next year, has in recent days repeatedly taken to the social media platform TikTok, popular among young people, to get his message across.

"It's a question of being a good citizen... our freedom is worth nothing if we infect our friends, neighbors or grandparents. To be free is to be responsible."

Meanwhile, small protests took place in Italy on Saturday. People rallied against the introduction of new measures there requiring proof of coronavirus status to attend indoor events and for teachers. Over 1,000 people gathered in Piazza del Popolo in central Rome shouting "No Green Pass!" and "Freedom!" and thousands marched in Milan.

The Green Pass, an extension of the European Union's COVID-19 digital certification, became mandatory in Italy on Friday for those wishing to visit cinemas, museums and indoor sports facilities or eat out in restaurants.