France to boost protection around Islamic places of worship 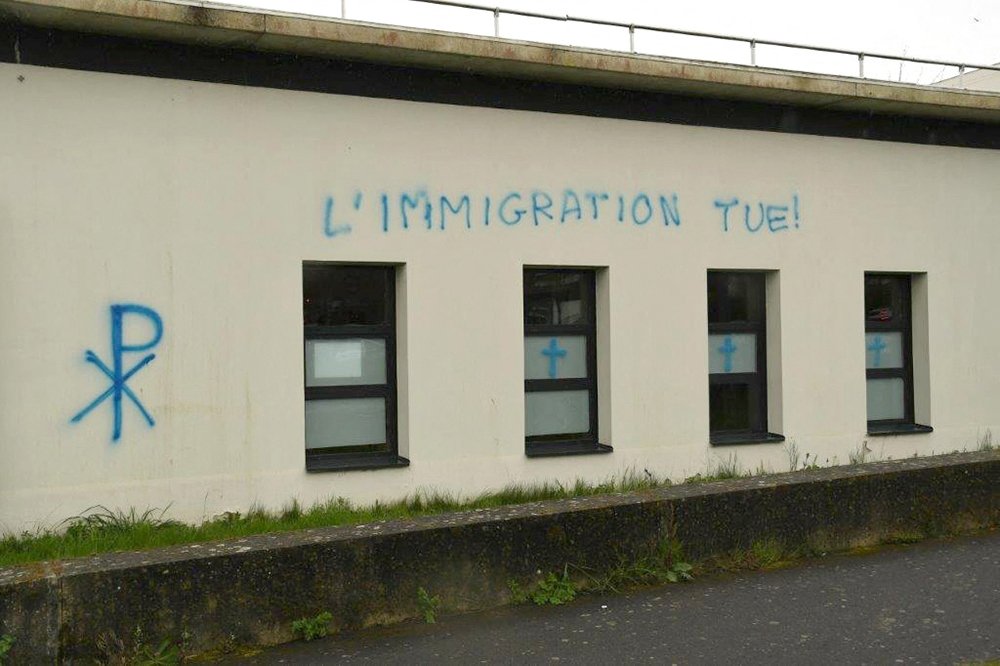 This handout picture released by the French Ministry of Justice shows graffiti tags that read, "Immigration kills," sprayed on the walls of the Avicenna mosque and Islamic cultural center in Rennes, western France, April 11, 2021. (AFP Photo)
by DAILY SABAH WITH AA Apr 12, 2021 10:05 am
RECOMMENDED

The French interior minister, who is known to have a harsh stance against Muslims in the country, ordered law enforcement on Sunday to step up vigilance around mosques and Islamic cultural centers as attacks on these places have increased recently in cities all over France.

"The anti-Muslim inscriptions that have been inscribed on this cultural and religious center are unacceptable. Freedom of worship in France is a fundamental freedom," Gerald Darmanin said during a visit to the Avicenna Islamic Cultural Center in the city of Rennes in northwestern France.

The center's premises were vandalized days before the start of the Islamic holy month of Ramadan with Islamophobic graffiti. Darmanin said he traveled there to show the government of President Emmanuel Macron's solidarity with the Muslim community.

The French Council of Muslim Worship (CFCM) said the incident in Rennes occurred two days after an arson attack on the Arrahma mosque in Nantes, while there had also been death threats addressed to Muslim journalist Nadiya Lazzouni.

It blamed the upsurge in anti-Muslim acts on the ongoing debates around a bill consolidating the principles of the republic indiscriminately targeting the Muslim community. In a statement, the CFCM said the debates "have unfortunately served as forums for haters of all stripes."

It added that the Islamophobic slogans are part of a separatist movement whose ideology inspired Brenton Tarrant, who opened fire on two mosques in Christchurch, New Zealand in March 2019, killing 51 people, and is theorized by French intellectuals.

"This separatism and those who instrumentalize Islam feed each other and constitute a threat to our country and our fellow citizens," the council warned while appealing to Muslims to be vigilant and not get in the "wrong fight."

The attacks follow an Islamophobic bill, which saw nationwide protests against it. The bill, approved by the French National Assembly on Feb. 16, is being criticized because it targets the Muslim community and imposes restrictions on almost every aspect of their lives. It provides for intervening in mosques and in the associations responsible for their administration, as well as controlling the finances of associations and nongovernmental organizations (NGOs) belonging to Muslims.

It restricts the education choices of the Muslim community by preventing families from giving children a home education. The bill also prohibits patients from choosing doctors based on gender for religious or other reasons and makes "secularist education" compulsory for all public officials.

France's decision to ban girls under 18 from wearing religious symbols such as the hijab in public places triggered major opposition campaigns on social media, with many Muslim girls denouncing the French authorities for restricting their freedoms and rights.

As part of the "anti-separatism’ bill, the French Senate has approved an amendment for the “prohibition in the public space of any conspicuous religious sign by minors and of any dress or clothing which would signify inferiority of women over men.” The move by the French Senate is part of a push by Paris to pass a so-called “anti-separatism” law. The country's authorities argue that the bill, which has been introduced by French President Emmanuel Macron's centrist La République En Marche (LREM), aims to strengthen the country's secular system, but critics denounced it, arguing that it jeopardizes the Muslim population.

Following the announcement, thousands of Muslim girls joined a social media campaign posting pictures with the hashtag #HandsOffMyHijab. The hijab is a headscarf worn by many Muslim women and has been the subject of enmity in France for decades.

"On my trip to France 3 years ago the border police forced me to remove my scarf to enter the country even though I wore a scarf in my passport photo. No government should regulate how a woman can dress, whether to keep it on or take it off. #Handsoffmyhijab, #FranceHijabBan," Amani al-Khatahtbeh, the founder of Muslimgirl, an online news outlet that is raising the place of Muslim women in mainstream society, and the first Muslim woman to run for U.S. Congress from New Jersey, wrote on Twitter.

Another posted: “I thought we already had this covered. Forcing a woman to wear a hijab is wrong. Just like forcing her to take it off is wrong. It’s HER choice.”

Olympic athlete Ibtihaj Muhammad shared a post on Instagram arguing that the amendment indicated “Islamophobia is deepening in France.” “This is what happens when you normalize anti-Islamic and anti-Muslim hate speech, bias, discrimination, and hate crimes – Islamophobia written into law,” the post said.