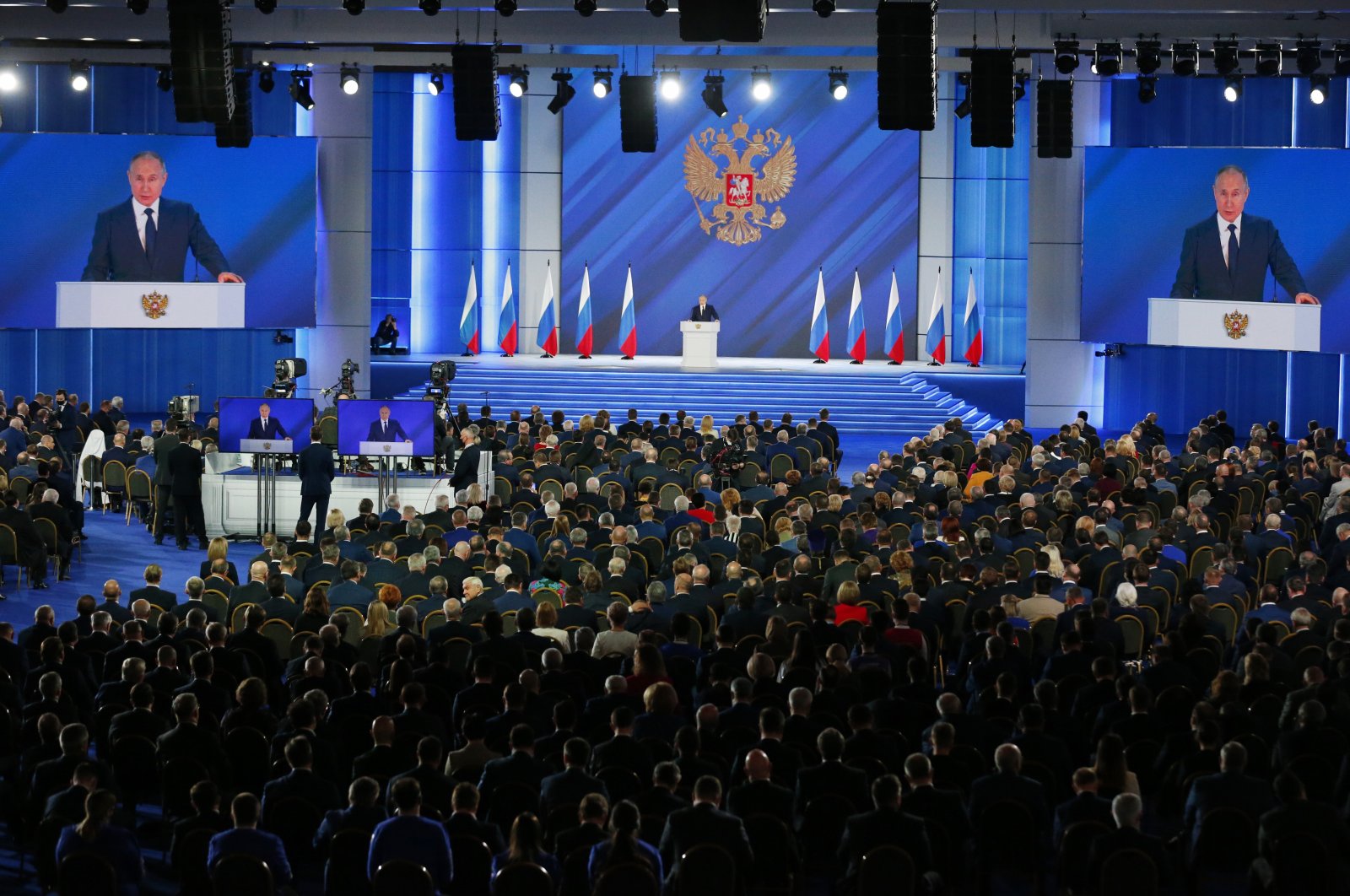 Russian President Vladimir Putin on Wednesday strongly warned against further encroachment on Russia's security interests, saying Moscow's response would be "quick and tough" as he gave a key speech amid deep tensions with the West.

Putin's warning during his annual state-of-the-nation address came amid a massive Russian military buildup near Ukraine, where cease-fire violations in the seven-year conflict between Russia-backed separatists and Ukrainian forces have escalated in recent weeks.

The United States and its allies have urged the Kremlin to pull the troops back. "I hope that no one dares to cross the red line in respect to Russia, and we will determine where it is in each specific case,” Putin said. "Those who organize any provocations threatening the core security interests of Russia will feel sorry for their deeds as never before.”

Moscow has rejected Ukrainian and Western concerns about the troop buildup, saying it doesn't threaten anyone and Russia is free to deploy its forces on its territory. But the Kremlin has also warned Ukrainian authorities against trying to use force to retake control of the rebel-held east, saying that Russia could be forced to intervene to protect civilians in the region.

"We really don’t want to burn the bridges,” Putin said. "But if some mistake our good intentions for indifference or weakness and intend to burn or even blow up those bridges themselves, Russia’s response will be asymmetrical, quick and tough.”

Putin pointed to Russia’s moves to modernize its nuclear arsenals and said the military would continue to procure a growing number of state-of-the-art hypersonic missiles and other new weapons. He added that the development of the nuclear-armed Poseidon underwater drone and the Burevestnik nuclear-powered cruise missile is continuing successfully.

Without singling out a specific country, the Russian leader denounced, a foreign government that imposes "unlawful, politically motivated economic sanctions and crude attempts to enforce its will on others.”

He said Russia has shown restraint and often refrained from responding to "openly boorish” actions by others. The Biden administration last week imposed an array of new sanctions on Russia for interfering in the 2020 U.S. presidential election and for involvement in the SolarWind hack of federal agencies – activities Moscow has denied. The U.S. ordered 10 Russian diplomats expelled, targeted dozens of companies and individuals, and imposed new curbs on Russia’s ability to borrow money.

Russia retaliated by ordering 10 U.S. diplomats to leave, blacklisting eight current and former U.S. officials, and tightening requirements for U.S. Embassy operations. "Russia has its own interests, which we will defend in line with the international law,” Putin said during Wednesday's address. "If somebody refuses to understand this obvious thing, is reluctant to conduct a dialogue and chooses a selfish and arrogant tone, Russia will always find a way to defend its position.”

He harshly criticized the West for failing to condemn what he described as a botched coup attempt and failed plot to assassinate Belarus' President Alexander Lukashenko, allegedly involving a blockade of the country’s capital, power cuts and cyberattacks. Belarusian and Russian security agencies arrested the alleged coup plotters in Moscow earlier this month.

"The practice of organizing coups and planning political assassinations of top officials goes over the top and crosses all boundaries,” Putin said, drawing parallels between the alleged coup attempt in Belarus, plots against Venezuelan President Nicolas Maduro and the popular protests that led to the ouster of Ukraine's former Russia-friendly president, Viktor Yanukovych, in 2014.

Russia responded to Yanukovych's ouster by annexing Ukraine's Crimean Peninsula and throwing its support behind a separatist insurgency in eastern Ukraine. Since then, fighting in eastern Ukraine has killed more than 14,000 people and devastated the country's industrial heartland.

Putin dedicated most of his annual address to domestic issues, hailing the nation's response to the coronavirus pandemic. He said the quick development of three coronavirus vaccines underlined Russia's technological and industrial potential.

The Russian leader called for a quicker pace of immunizations, voicing hope that the country could achieve collective immunity this fall. He put forward a slew of economic incentives to help the economy overcome the blow from the pandemic and new social payments focusing on families with children. As Putin spoke, a wave of protests started rolling across Russia's far east in support of imprisoned opposition leader Alexei Navalny.

The politician, who is Putin's most persistent critic, started a hunger strike three weeks ago to protest what he said was inadequate medical treatment for back pains and officials' refusal to allow his doctor to visit him in prison.

Navalny's treatment and deteriorating condition has caused international outrage and prompted his allies to call for nationwide protests on Wednesday. Police quickly cracked down on unauthorized demonstrations, arresting scores.