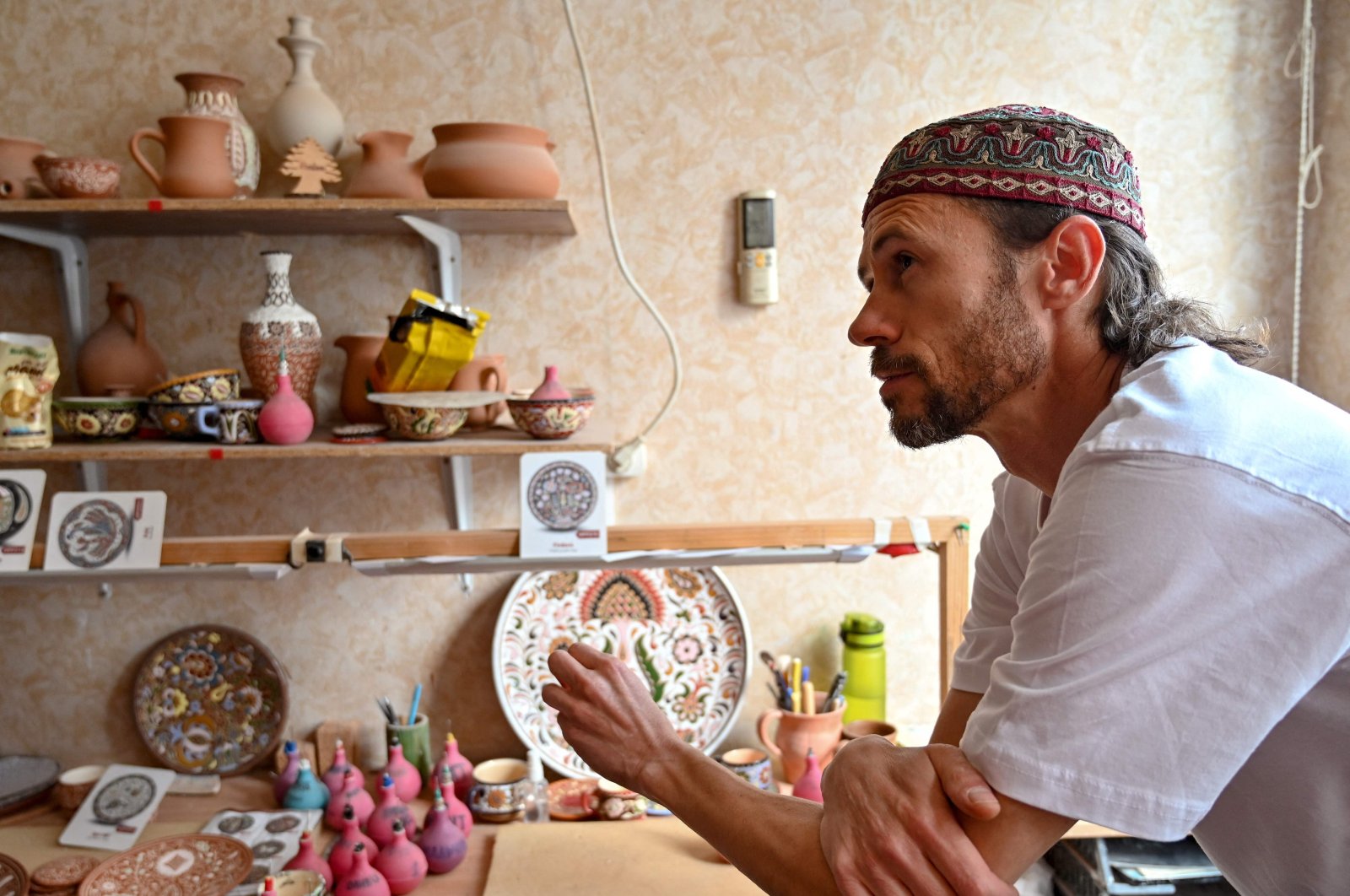 Born in exile, Rustem Skybin returned to his ancestral homeland Crimea in the mid-1990s only to be uprooted – just like his family before him – nearly 20 years later.

The 45-year-old ceramics artist is among thousands of ethnic Crimean Tatars to have fled Crimea for other parts of Ukraine since 2014, when Moscow annexed the peninsula in a move not recognized by most of the world. Turkey, along with the rest of NATO, criticized Moscow's 2014 annexation of Crimea and voiced support for Ukraine's territorial integrity as Kyiv's forces battle pro-Russian separatists in eastern Ukraine.

The Muslim minority opposed Russia's takeover, fearing a repeat of Soviet-era repressions like the mass deportations that drove Skybin's relatives to Uzbekistan in Central Asia. Today, many among those fleeing say their fears of Kremlin rule are being borne out.

"If we look at the past, they did everything to prevent our people from existing," Skybin told Agence France-Presse (AFP) in his workshop stacked with ornately painted crockery in Kyiv. "And what they're doing now does not guarantee it will change. In fact, now, there are repressions, political orders, imprisonment."

Most of Crimea's approximately 300,000 Tatars boycotted a disputed vote set up by Moscow in 2014 on integrating with Russia. Authorities cracked down hard on the Turkic minority after the takeover, banning its traditional assembly, the Mejlis, closing a television channel and detaining activists.

The arrest this month of the deputy head of the Mejlis, Nariman Dzhelial, on charges of conspiring to blow up a gas pipeline with several other activists was the latest shock to the beleaguered community.

"This situation has dealt a painful blow to families," Skybin said of the crackdown and the exodus it spurred.

Although he now has a stable life in Ukraine's capital Kyiv, his mother and sister returned home, and his marriage collapsed. Fearing for his safety, he has not visited Crimea since 2017.

"There are fewer and fewer opportunities to visit or cross the border. We all want to see each other and we are all separated from each other," Skybin told AFP.

Russia, which has jailed more than 90 Crimean Tatars, has rejected allegations the arrests are politically motivated, saying it targets only Islamists or pro-Kyiv "terrorists."

Still, Kremlin rule has forced an estimated 10% of Crimean Tatars to leave the peninsula since 2014, an exodus that 33-year-old rights activist Alim Aliev described as a "brain drain."

"The most active people have left: students, young specialists, businesspeople, political and cultural figures and journalists," said the co-founder of Crimea SOS, a nongovernmental organization (NGO).

It is a fate that many in the community, which has lived on the peninsula for centuries, say has been repeated throughout their history.

After Tsarist Russia took over Crimea in 1783, hundreds of thousands of Crimean Tatars fled the peninsula to escape religious and political persecution. Under Joseph Stalin, they were accused of collaborating with Nazi Germany and deported to Central Asia. Nearly half died of starvation or disease.

They began returning under Mikhail Gorbachev and became Ukrainian nationals after independence in 1991. Then came the Russian annexation.

"Once again, people have been stripped of the opportunity to live at home or visit their home," said Aliev. Skybin, whose artwork borrows from ethnic Crimean Tatar motifs, saw in his own flight parallels to the forced displacement of his family in 1944.

"You leave your home and property behind and head into the unknown," he said. "What our grandparents told us, we experienced it ourselves."

Crimean Tatars say they feel safe in Ukraine, but they worry their children and grandchildren will forget their mother tongue. Eskender Budzhurov, who was born in Uzbekistan and fled Crimea after Moscow's takeover, said Kyiv had become a "second home" for him. But he lamented a lack of schools teaching in his native language.

"I don't even know how five-to-seven-year-old children will learn the language," the 61-year-old said.

Crimean Tatars say most Ukrainians have shown compassion towards them and that the country has enough mosques and halal food. This year, the government has for the first time earmarked funds to promote Crimean Tatar culture. Still, many dream of returning home.

"Our parents and grandparents waited for 70 years to return," said Skybin, the ceramics artist. "And we, too, will be back."