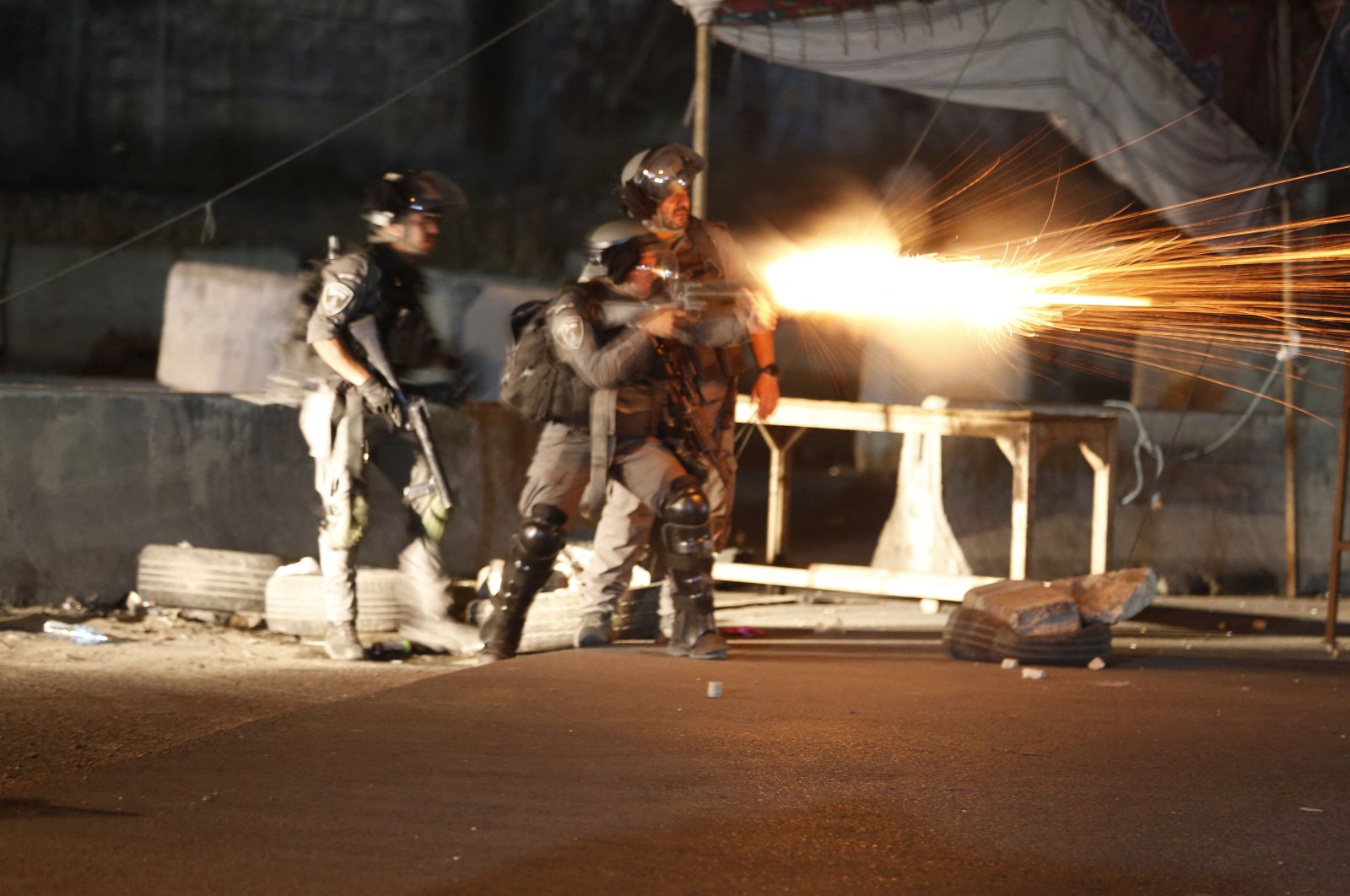 Israeli army soldiers fire tear gas at Palestinians at the Qalandiya checkpoint between Ramallah and Jerusalem, in the occupied West Bank, May 11, 2021. (AFP Photo)
by DAILY SABAH May 11, 2021 11:15 am
RECOMMENDED

The so-called charter of "republican values" imposed on France's Muslims by President Emmanuel Macron prohibits talk of the current events in Jerusalem in mosques.

The charter, adopted by the French Council of Muslim Faith (CFCM) January this year, bans Muslims from any political discussion in places of worship.

"We refuse to allow places of worship to be used to disseminate political discourse or to import conflicts occurring elsewhere in the world. Our mosques and places of worship are reserved for prayer and the transmission of values," Article 6 of the document says.

Thus, it prohibits discussions of the recent, and any future, Israeli aggression against Palestinians.

Hundreds of Palestinian protesters were injured in attacks by the Israeli police in the Jerusalem holy site, the Al-Aqsa Mosque Monday after days of raids and attacks against peaceful worshippers during the month of Ramadan. Israeli airstrikes on the Gaza Strip also killed 24 people Monday, including nine children.

The "values charter" was ordered by Macron, who claimed that it was needed in order to fight so-called "Islamic separatism," prompting criticism and rejection from the Muslim community last year.

Three organizations of the CFCM have unilaterally condemned the charter, expressing disagreement with the text and saying that it risks "weakening the bonds of trust" and also "undermining the honor of Muslims."

Meanwhile, experts voiced concern about the ramifications of the charter, which in their view would legitimize Islamophobia in France, where anti-Muslim attacks surged by 53% in 2020. Such a sharp increase occurred despite the COVID-19 pandemic that prompted strict lockdowns for several months of last year.

France engaged in a bitter feud with Muslim countries last year, including Turkey, over statements and policies made by top French officials following the republication of offensive caricatures of the Prophet Muhammad. Muslims across the world denounced satirical French magazine Charlie Hebdo's decision to republish the cartoons, citing disrespect toward Muslims and the Prophet Muhammad.

Macron said he will not prevent the publishing of the cartoons under the pretext of freedom of speech, while French Muslims have accused him of trying to repress their religion and legitimizing Islamophobia. Several Muslim-majority countries have condemned Macron's attitude toward Muslims and Islam.

Multiple protests and boycotts against French products have taken place around the world following Macron's remarks, with critics claiming that the French president's government is exploiting the spate of violence to intensify his controversial anti-Muslim stance.