Migrant crisis on Belarus border may stretch for years: Poland 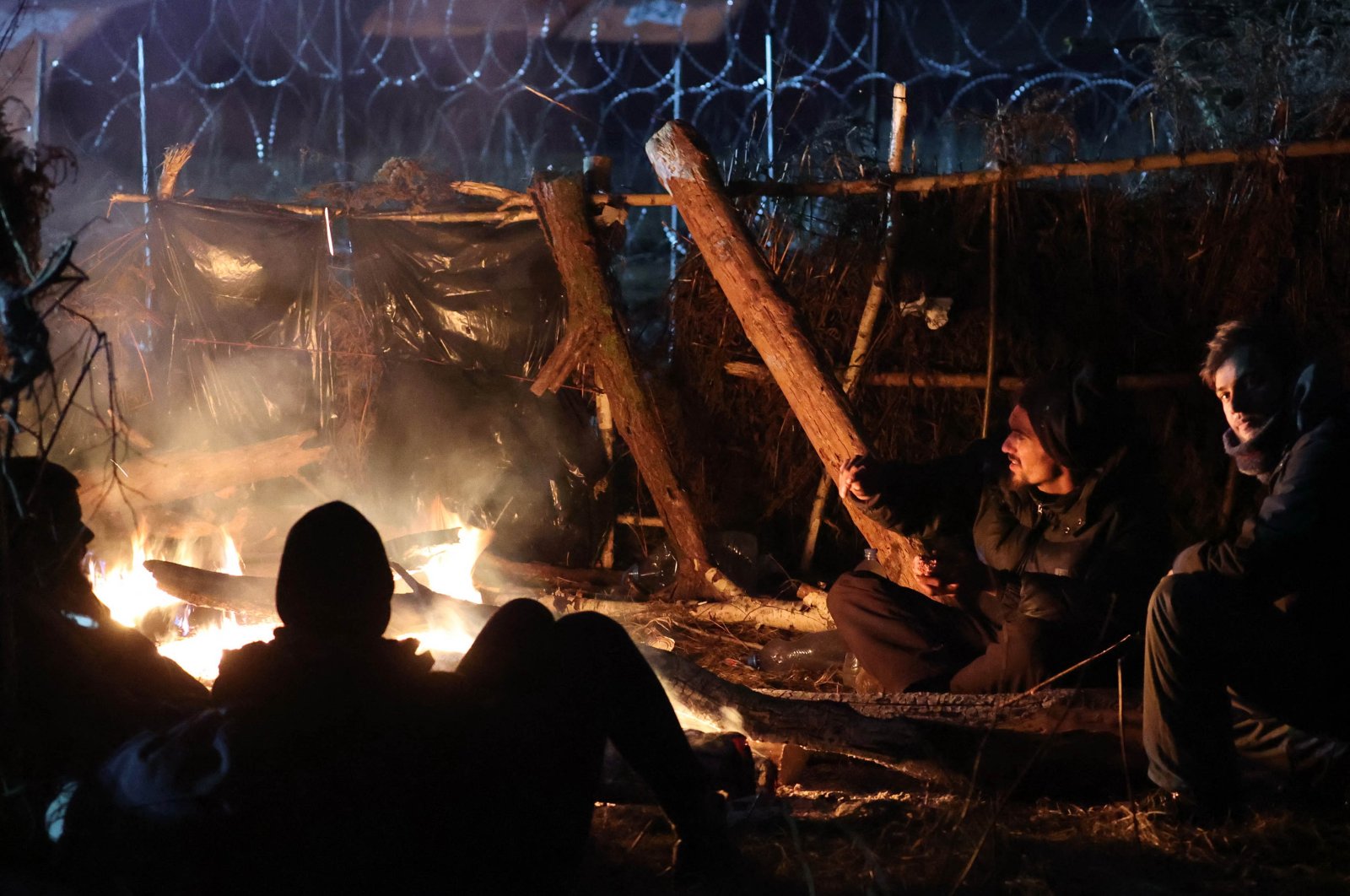 Migrants aiming to cross into Poland warm themselves by a fire on the Belarusian-Polish border in the Grodno region, Belarus, Nov. 16, 2021. (AFP Photo)
by Agencies Nov 17, 2021 12:43 pm
RECOMMENDED

Poland warned Wednesday that the crisis on the Belarusian border could last for months or even years, a day after Polish forces used tear gas and water cannons to deter stone-throwing migrants.

Polish Defense Minister Mariusz Blaszczak said there had been further attempts of crossing the border during the night, in the latest escalation of a monthslong standoff on the European Union's eastern border. Thousands of migrants, mainly from the Middle East, are staying on the border in what the West says is a crisis engineered by Belarus to try to divide the EU and hit back against sanctions.

Belarusian President Alexander Lukashenko and his main ally, Russian President Vladimir Putin, have rejected the accusations and criticized the EU for not taking in the migrants.

"We have to prepare for the fact that the situation on the Polish-Belarusian border will not be resolved quickly. We have to prepare for months or even years," Blaszczak told Poland's Radio Jedynka and added that attempts to cross the border had continued during the night. Blaszczak said migrants had used the same "method of attacking the Polish border" as seen on Tuesday at the Bruzgi-Kuznica border crossing.

"The public attention focused on what happened in Kuznica, while smaller groups of migrants tried to break through the Polish border in other sections, also at night," he was quoted as saying by Agence France-Presse (AFP).

The border guard service said it had detected "161 attempts of illegal crossing" on Tuesday, including "two forceful attempts to cross the border registered during the evening."

Polish police said nine officers were injured in the clashes on Tuesday, along with a border guard and a soldier. A police spokesperson said no injured officers remained in the hospital.

Belarus and Russia condemned the action taken by Polish forces on Tuesday, which came a day after the EU and United States said they were expanding sanctions against Belarus for the migrant crisis.

The West has accused Belarus of luring thousands of migrants, many from Iraq and Syria, with the promise of an easy crossing into the EU and then forcing them to stay at the border.

The EU's eastern member states of Latvia, Lithuania and Poland have refused to take the migrants, leaving many stranded for weeks in the forested borderlands between the two countries.

Following pressure from the EU, several airlines have said they will now stop transporting potential would-be migrants to Belarus. Iraq has also said it will start voluntary repatriations of its citizens from Belarus this week and the EU border agency Frontex is working with the Polish and Iraqi authorities on arranging charter flights from Poland as well.

As a precaution, the Estonian government summoned 1,700 reserve soldiers on Wednesday for an unannounced exercise that will include installing a razor-wire barrier along 40 kilometers (25 miles) of its border with Russia, Reuters reported.

Lukashenko, who has crushed opposition to his rule over nearly three decades in power, discussed the crisis with German Chancellor Angela Merkel on Monday. It was his first phone call with a Western leader since he suppressed mass protests against his rule last year.

Aid groups say at least 11 migrants have died on both sides of the border since the crisis began in the summer and have called for a humanitarian response to the crisis.

Visiting areas near the border on the Polish side, the Council of Europe Human Rights Commissioner Dunja Mijatovic on Tuesday said the situation was "extremely dangerous."

"We need to find a way to de-escalate, to make sure the focus is really to stop the suffering," she told reporters.

Russian state television on Wednesday showed hundreds of migrants at an indoor center set up by Belarusian authorities near the border where families with young children spent the night.

The Belarusian health ministry said it had hospitalized six people, including four children, from the Bruzgi camp.

Around 1,000 migrants have spent the night in makeshift accommodation in a warehouse on the Poland-Belarus border the day after clashes between migrants and Polish security forces, according to the Deutsche Presse-Agentur (dpa).

Some migrants on the Belarusian side returned to the tent camp they had been staying in previously, while others spent the night at the border clearance terminal, a police spokesperson said on Wednesday.

Belarusian state news agency Belta published photos of adults and children sitting in a hall with blankets and sleeping bags on Wednesday morning.

However, some 2,000 people later returned to their original tent camp in the forest. Belta also published photos of migrants trying to protect themselves from the cold in temperatures around freezing point with campfires.

Lukashenko had previously ordered the storage facilities of a logistics company in the Grodno region near the border to be converted into a migrant camp.

A Polish government official said Wednesday that migrants who have spent days in a makeshift camp on the Belarusian side of Poland's eastern border were being taken away by bus by Belarusian officials, offering the prospect of a possible de-escalation in a tense standoff.

Maciej Wasik, a Polish deputy interior minister, said he had received information that migrants were boarding buses provided by Belarus and leaving the area.

Poland's Border Guard posted on Twitter a video showing migrants with bags and backpacks being directed by Belarus forces away from the border. However, Border Guard spokeswoman, Anna Michalska said some of the migrants were seen taking wooden logs with them, raising questions about whether they might be moved to another spot along the frontier.