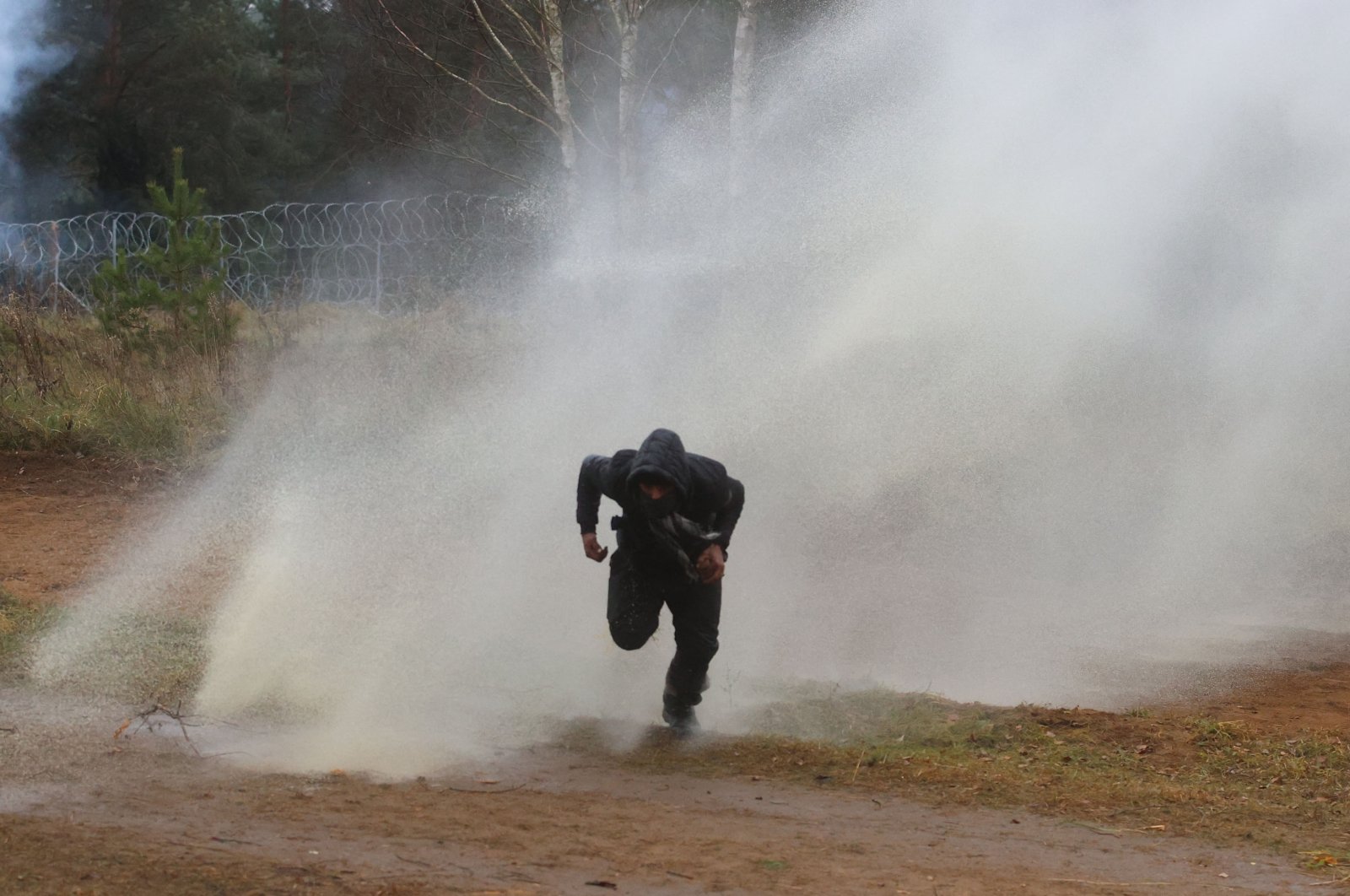 A man runs away from a water cannon used by Polish law enforcement officers against migrants attempting to break into Poland at the Bruzgi-Kuznica border crossing on the Belarusian-Polish border, Nov. 16, 2021. (AFP Photo)
by Agencies Nov 16, 2021 3:10 pm
RECOMMENDED

Polish forces fired tear gas and deployed water cannons against stone-throwing migrants trying to cross the border from Belarus on Tuesday, as Belarusian leader Alexander Lukashenko claimed he wanted to avoid a "confrontation."

Footage shared by a Polish government spokesperson and the Ministry of Defense showed a further escalation of the crisis at the border, where migrants have assembled in growing numbers on the Belarusian side in the last week.

"Attention, attention, if you don't follow orders, force will be used against you," said a loudspeaker message directed at migrants throwing objects, according to the footage, which was shown on public broadcaster TVP.

Migrants were also shown throwing bottles and logs at the border fence and Polish soldiers and using sticks to try to break the border fence in the footage shared by the Polish government. The Interior Ministry said a police officer was seriously injured by an object thrown across the border and was in the hospital with a suspected fractured skull.

Polish border guards estimate up to 4,000 migrants are currently camped out along the border between Poland and Belarus in increasingly dire conditions and freezing temperatures.

Western powers accuse Belarus of orchestrating the crisis, possibly with the backing of Russia, by luring migrants to the border to sow division in the European Union – claims denied by Minsk and Moscow. A standoff near the Bruzgi-Kuznica border crossing on the EU's eastern frontier began last week when hundreds of migrants gathered there.

"Migrants attacked our soldiers and officers with rocks and are trying to destroy the fence and cross into Poland," Poland's Defense Ministry said Tuesday, tweeting a video showing apparent clashes at the border. "Our forces used tear gas to quell the migrants' aggression."

Russia condemned Poland's use of tear gas and water cannons against the migrants, with Foreign Minister Sergei Lavrov calling it "absolutely unacceptable."

"The behavior of the Polish side is absolutely unacceptable," he told a press conference in Moscow, citing "tear gas and a water cannon and shots fired above the heads of migrants towards the direction of Belarus."

Lukashenko told a government meeting on Tuesday: "We cannot let this so-called problem lead to a heated confrontation."

"The main thing now is to protect our country and our people, and not to allow clashes," he added, according to state news agency Belta.

The Belarusian leader discussed the crisis with German Chancellor Angela Merkel on Monday, his first phone call with a Western leader since he suppressed mass protests against his rule last year. Merkel's office said the pair discussed bringing humanitarian aid to the migrants, whose number includes many young children.

Lukashenko – in power since 1994 and accused by the West of rigging an election last year – said he and Merkel agreed the standoff should be defused.

"We were of the united opinion that nobody needs escalation – not the EU, or Belarus," he said.

But he said he had "differing" views with Merkel on how the migrants got to Belarus, with the West saying Minsk had brought them there as revenge for sanctions.

EU foreign ministers on Monday agreed that existing sanctions targeting Lukashenko's regime will be expanded to include individuals or companies found to have encouraged border crossings. The United States has also vowed to expand its sanctions on Belarus.

Iraq has said it will start voluntary repatriations of its citizens from Belarus this week. The Iraqi Embassy in Moscow said it would fly out around 200 people in a flight on Thursday. But many migrants – including those Agence France-Presse (AFP) spoke to – have vowed not to go back. The EU meanwhile has been asking for the flights to Belarus to stop.

Turkish Airlines has now banned Iraqis, Syrians and Yemenis from flying to Belarus via Turkey and private Syrian carrier Cham Wings Airlines has said it will halt flights to Minsk. Belarus's state-run airline Belavia has also said that Syrians, Iraqis, Yemenis and Afghans are banned from incoming flights from the United Arab Emirates (UAE) at Dubai's request.

At least 11 migrants have died on both sides since the influx started in the summer, according to aid groups. One of them, a 19-year-old Syrian man from the war-torn city of Homs, was laid to rest on Monday in a cemetery near the border belonging to Poland's tiny ethnic Muslim community.

Poland's government spokesperson said the government was discussing whether to launch formal consultations on the crisis with NATO allies.

"We are preparing for a pessimistic outcome – that this conflict could stretch out for months," spokesperson Piotr Muller told a news conference.

"We have a hybrid war, but an actual war, with arms, is not on our horizon. We are facing an unpredictable enemy," Kaczynski told Polish public radio.