Over 1,700 arrested in Navalny protests across Russia 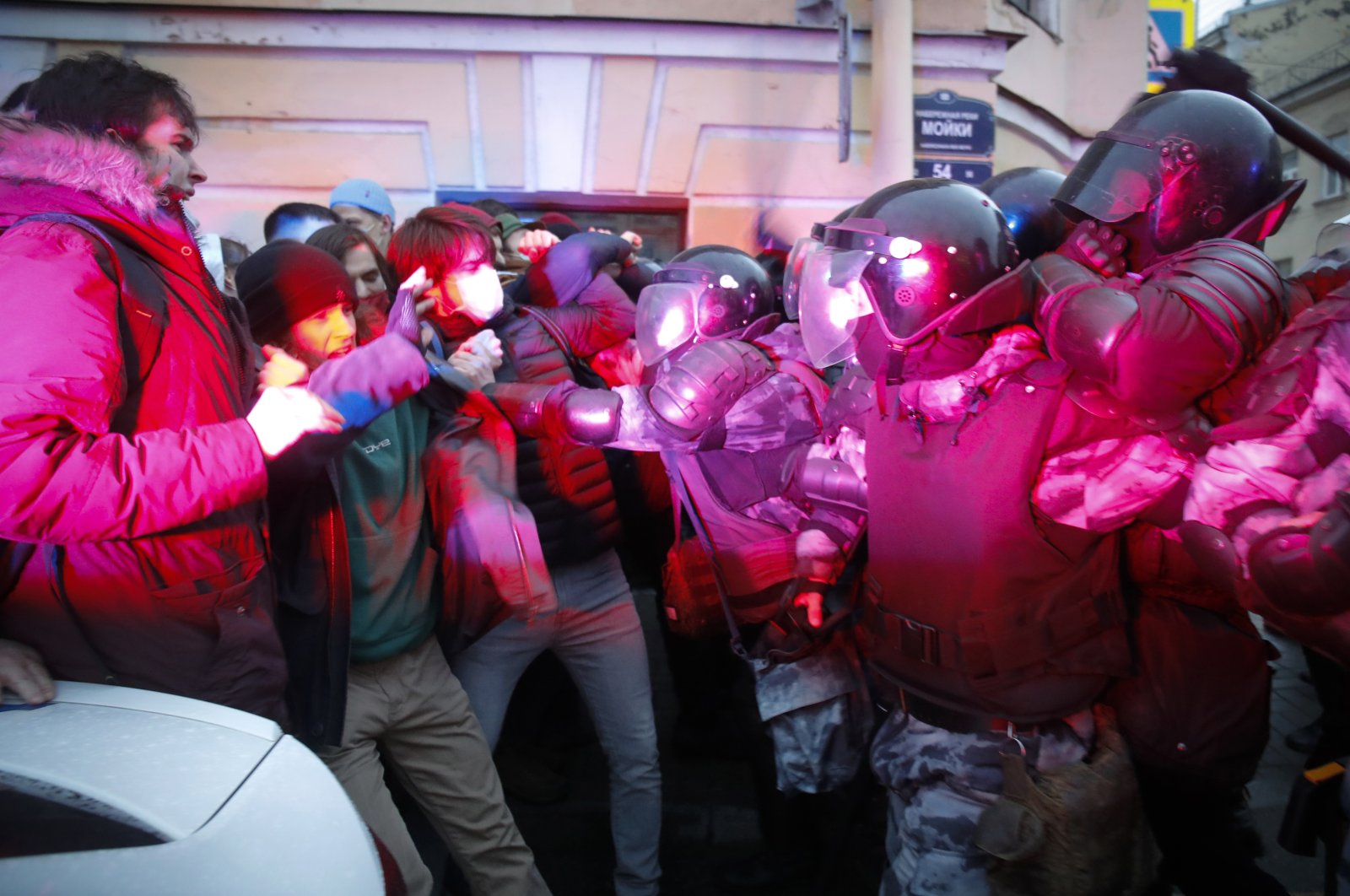 Russian police arrested more than 1,700 protesters Wednesday as demonstrations in support of hunger-striking opposition figure Alexei Navalny were held in dozens of cities.

His spokesperson was jailed for 10 days and another close ally was detained on the same day that President Vladimir Putin delivered a state-of-the-nation speech warning the West not to cross Russia's "red lines" and pointedly made no mention of Navalny.

"This is one of the last gasps of a free Russia, as many are saying. We came out for Alexei ... against a war in Ukraine and the wild propaganda," said Marina, a student at the Moscow protest.

OVD-Info, a group that monitors protests and detentions, said 1,782 people had been arrested, including 804 in St. Petersburg and 119 in the Urals city of Ufa.

Protesters in central Moscow chanted, "Freedom to Navalny!" and "Let the doctors in!" Navalny's wife Yulia joined the rally in the capital, where demonstrators chanted her name.

The opposition had hoped the rallies would be the biggest in modern Russian history, and presented them as an attempt to save Navalny's life by persuading the authorities to allow his own doctors to treat him.

But turnout looked smaller than during protests earlier this year before Navalny was jailed for 2 1/2 years for parole violations related to what he said were politically motivated charges of embezzlement.

Police said 6,000 people protested illegally in Moscow, while Navalny's YouTube channel said turnout in the capital was up to 10 times higher. Alexei Venediktov, a veteran journalist and head of the Ekho Moskvy radio station, said 10,000-15,000 people had rallied in Moscow and 7,000-9,000 in St. Petersburg.

The 44-year-old Navalny, who last year survived a nerve agent attack that Russian authorities denied carrying out, is thin and weak after starving himself for three weeks, and his allies say he risks kidney failure or cardiac arrest. The United States has warned Russia it will face "consequences" if he dies.

The state human rights commissioner, Tatyana Moskalkova, said four doctors from outside the federal prison agency had visited Navalny on Tuesday and found no serious health problems. Russia says he has been treated as would any other prisoner.

The confrontation over Navalny's fate is a flashpoint in Moscow's dire relations with the West, already aggravated by economic sanctions, diplomatic expulsions and a Russian military buildup near Ukraine.

United Nations human rights experts urged Moscow to let Navalny be medically evaluated abroad. They said they believed his life was in danger as he was being held in "conditions that could amount to torture."

Call to 'fight this darkness'

Navalny's spokesperson, Kira Yarmysh, and an ally, Lyubov Sobol, were detained near their Moscow homes hours before the rally in the capital. European Council President Charles Michel, who chairs European Union summits, called their arrests "deplorable."

Yarmysh was later jailed for 10 days at a hearing for inciting people to protest. Sobol was released ahead of a hearing on Thursday.

Navalny aide Ruslan Shaveddinov tweeted: "This is repression. This cannot be accepted. We need to fight this darkness."

Dozens of police vans were deployed to the center of Moscow. The square where activists had hoped to gather was cordoned off with metal barriers, as was Red Square.

Up to about 300 people protested in Vladivostok, some toting banners saying "Freedom for political prisoners" and "No war, repressions and torture!"

"Everyone realizes the current authorities have nothing new to propose for the country. We need a new generation of politicians. I see Navalny as one of them," said Ilya, a 19-year-old student in the far eastern city of Vladivostok.

Elsewhere, riot police used force to make arrests. In Magadan, in Russia's far east, officers forced a man to the ground and pinned back his arms.

Navalny launched his hunger strike over what he said was the refusal of the prison holding him to provide him with proper treatment for leg and back pain. The state prison service has said his condition is satisfactory.

U.S. Senator Bob Menendez, the chairperson of the Senate Foreign Relations Committee, urged the Russian government to provide Navalny with medical care and called for sanctions.

"This is barbarism playing out in real time, and we cannot be silent," he said.