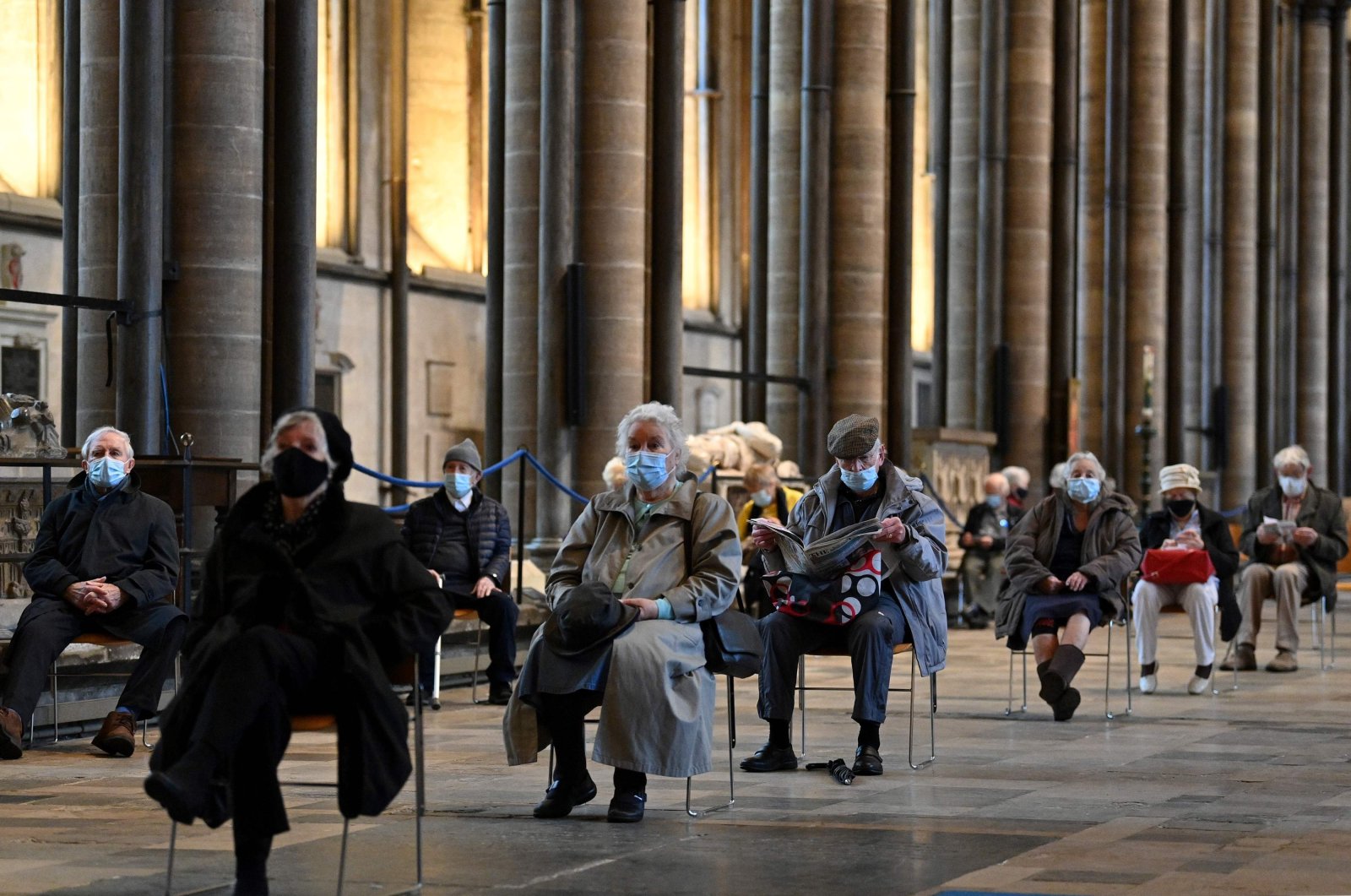 Members of the public sit socially distanced after receiving a dose of a COVID-19 vaccine at Salisbury cathedral, which has been converted into a temporary vaccination center in Salisbury, southwest England, Jan. 20, 2021. (AFP Photo)
by French Press Agency - AFP Sep 14, 2021 3:32 pm
RECOMMENDED

Frontline health and social care workers, older people and the clinically vulnerable in Britain will be eligible to receive a booster jab against COVID-19 starting from next week, the government said on Tuesday.

Health minister Sajid Javid told parliament he had approved a recommendation from advisory body the Joint Committee on Vaccination and Immunisation (JCVI) to start the program. He also approved a controversial proposal to offer jabs to children aged 12-15 as concern mounts about the spread of the virus in schools.

Coronavirus infection rates remain stubbornly high in Britain, despite a mass vaccination program that has seen some 81% of all adults receive two doses of a vaccine. And there remains concern that as the weather turns colder and social mixing increases indoors, COVID-19 and other respiratory diseases such as the seasonal flu will run rampant. The government has contingency plans to reintroduce measures including working from home and mask wearing should cases spiral and put health services under severe pressure, Javid told lawmakers.

"Any responsible government must prepare for all eventualities," he said. "We must stay vigilant as we approach this critical chapter."

Lim said data indicated a "small decrease" in COVID vaccine effectiveness after the second dose from "a little over 90% to a little under 90%."

The most marked decrease was in people over 50, making it prudent to give them and other at-risk groups a third "booster" shot. He told a news conference the aim was to ensure "levels of protection will be higher during the coldest months of the year," in line with a number of other countries.

The head of Britain's Medicines and Healthcare products Regulatory Agency (MHRA), June Raine, said the Pfizer, Moderna and AstraZeneca vaccines could all be used. Preference was given to Pfizer and Moderna, the latter of which will be given as a half dose. The jabs can be administered at the same time as flu vaccines, she added.

England's deputy chief medical officer Jonathan Van-Tam said the latest estimates were that Britain's vaccination program had averted some 24 million cases of COVID-19 and 112,000 deaths. But he warned that winter could still be "bumpy" at times and there was a need to "stay on top of things" with a booster jab program as the pandemic was still active.

"It's better to be pre-emptive, to prepare and plan for the worst possibilities," he told reporters, likening it to putting extra guide ropes on a tent before a storm hits.