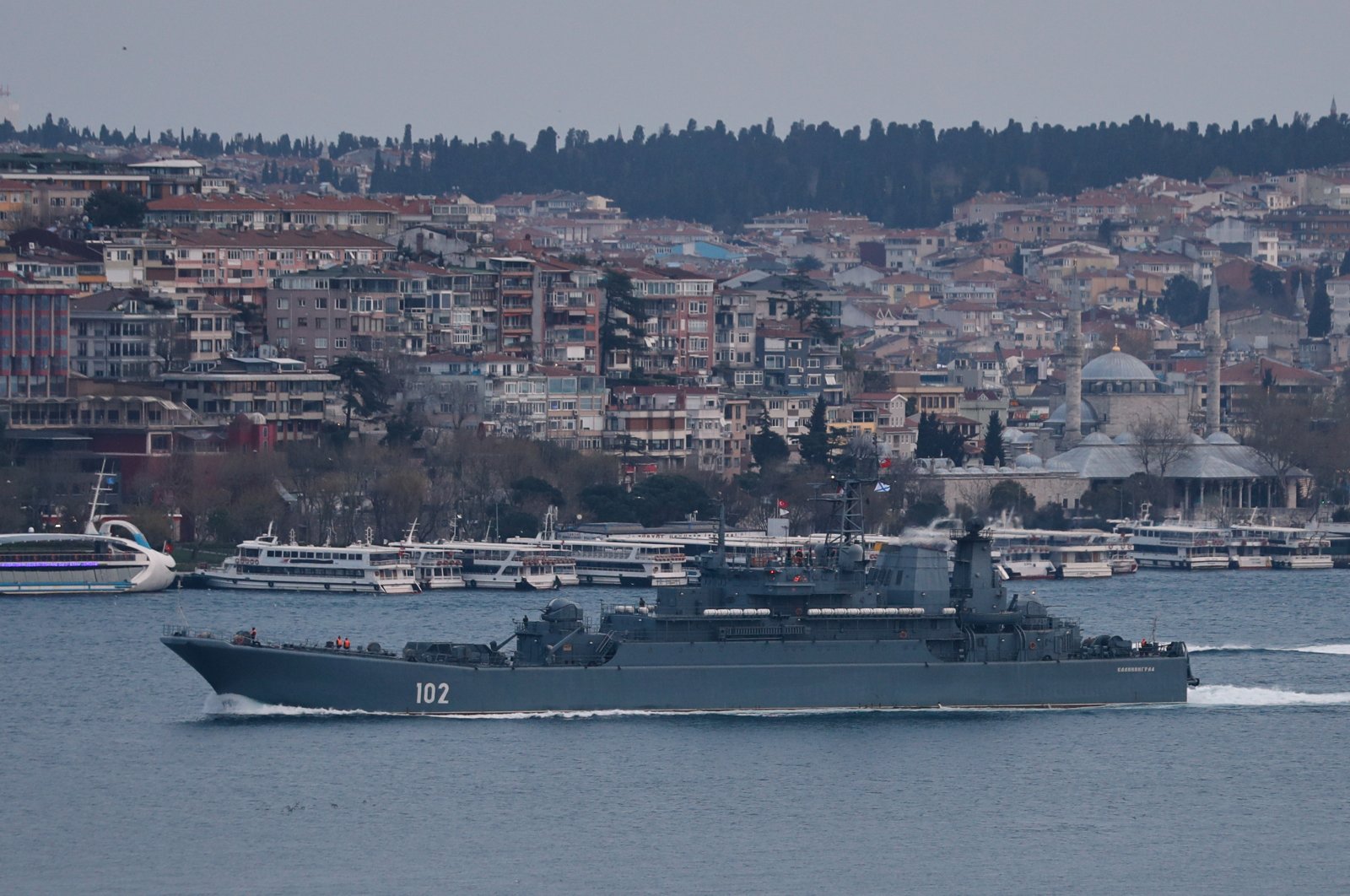 The Russian Navy's Ropucha-class landing ship Kaliningrad sets sail in the Bosporus, on its way to the Black Sea, in Istanbul, Turkey April 17, 2021. (Reuters Photo)
by DAILY SABAH WITH AGENCIES Apr 20, 2021 1:39 pm
RECOMMENDED

The U.S. State Department called Moscow's decision to close parts of the Black Sea until November an "unprovoked escalation" that may ultimately impact access to Ukrainian ports.

Russian state media reported that Moscow intends to close parts of the Black Sea to foreign military and official ships for six months.

Such a move could affect access to Ukrainian ports in the Sea of Azov, which is connected to the Black Sea through the Kerch Strait on the eastern tip of the Crimean Peninsula annexed by Russia in 2014.

"This represents yet another unprovoked escalation in Moscow's ongoing campaign to undermine and destabilize Ukraine," State Department spokesperson Ned Price said in a statement. "This development is particularly troubling amid credible reports of the Russian troop buildup in occupied Crimea and around Ukraine's borders, now at levels not seen since Russia's invasion in 2014," he added.

Tensions between Russia and the West have been escalating in recent weeks following an uptick in fighting between Ukraine's army and pro-Russia separatists in eastern Ukraine. Russia has massed its troops along Ukraine's northern and eastern borders and on the Crimean Peninsula, which Moscow annexed from Ukraine in 2014.

"More than 20 ships of the Black Sea Fleet conducted joint training with the crews of the Su-25SM3 attack aircraft of the Air Force and Air Defense," BSF reported on Tuesday.

Planned exercises were carried out "in accordance with the plan of the control check of the Black Sea Fleet forces in the winter period," it added.

"Earlier, more than 50 aircraft of the Southern Military District were redeployed to the Republic of Crimea as part of a control check," the statement said. The Russian Army conducted exercises "to repel air attacks by means of a simulated enemy using active radio-electronic interference and conditional use of air defense means."

"Three squadrons of attack aircraft of the Southern Military District conducted training on approaching a combat course, the conditional use of missile weapons for a detachment and withdrawal from a retaliatory strike from naval air defense systems," the press release said, noting that: "The flights were carried out at extremely low altitudes in difficult hydrometeorological conditions."

The decision to restrict the sailing of foreign military and official ships in parts of the Black Sea was published on April 14 in the bulletin of the Russian Department of Navigation and Oceanography of the Ministry of Defense.

"From 9 p.m. on April 24 until 9 p.m. on October 31, passage through the territorial sea of the Russian Federation for foreign military ships and other state vessels will be halted," the state-run RIA Novosti news agency cited a defense ministry statement as saying.

The restrictions will affect the western tip of Crimea, the peninsula's southern coastline from Sevastopol to Hurzuf, and a "rectangle" off the Kerch peninsula near the Opuksky Nature Reserve. The final area is near the Kerch Strait, which connects the Black Sea to the Sea of Azov and is of crucial importance for the export of grain and steel from Ukraine. The Kerch Strait became a scene of confrontation in 2018 after Russia seized three Ukrainian ships over alleged violations of its territorial waters.

Ukraine had been free to navigate the Kerch Strait along with Russia until 2014 when Moscow claimed full control of the waterway after annexing Crimea. The Kerch Strait is also the site of a costly 19-kilometer (12-mile) bridge connecting Crimea with mainland Russia that Moscow opened in 2018.

Ukraine's foreign ministry on Thursday slammed the navigation restrictions, which were initially reported without specifics earlier this week, as a "usurpation of the sovereign rights of Ukraine."

"Such actions of the Russian Federation are another attempt, in violation of the norms and principles of international law, to usurp the sovereign rights of Ukraine as a coastal state, since it is Ukraine that has the right to regulate shipping in these waters of the Black Sea," the document emphasized. It also noted that this step grossly violates the right to freedom of navigation guaranteed by the United Nations Convention on the Law of the Sea, according to which "Russia must neither obstruct nor halt transit through the international strait to ports in the Sea of Azov."

The European Union's foreign policy chief said Monday that in the face of the big military buildup of Russian troops near Ukraine's borders, it will only take "a spark” to set off a confrontation.

Borrell said the amassing of Russian troops, including at military field hospitals, and "all kinds of warfare” is the most important issue the Western world should focus on.

"It is the highest military deployment of the Russian army on the Ukrainian borders ever. It’s clear that it’s a matter of concern when you deploy a lot of troops," Borrell said. "Well, a spark can jump here or there.”

Initially, Borrell told reporters that "there are more than 150,000 Russian troops amassing on the Ukrainian borders and in Crimea," and doubled down on the figure later before his services had to correct it in the transcript, saying the real figure was over 100,000.

Nevertheless, Borrell said that "the risk of further escalation – it’s evident.” Borrell declined to say where he got the initial 150,000 Russian troop number from but called it "my reference figure.”

It was higher than the 110,000 estimates provided by Ukrainian Defense Minister Andriy Taran on Wednesday.

More than 14,000 people have died in the seven years of fighting between Ukrainian forces and Russia-backed separatists in eastern Ukraine that erupted after Russia's 2014 annexation of Ukraine's Crimean Peninsula. The EU has steadfastly opposed the annexation but has been unable to do anything about it. Efforts to reach a political settlement have stalled and violations of a shaky truce have become increasingly frequent in recent weeks across Ukraine's eastern industrial heartland known as Donbass.

Diplomats had expected there was little to no chance of immediate new sanctions on Moscow, but they will now seek to apply more pressure through diplomacy.

"Moscow must switch from provocation to cooperation," German Foreign Minister Heiko Maas said, according to The Associated Press (AP).

Over the weekend, French President Emmanuel Macron said that while dialogue with Russia is essential, "clear red lines” carrying possible sanctions must also be drawn with Moscow over Ukraine.

"All in all, the relations with Russia are not improving; on the contrary, the tension is increasing on different fronts,” Borrell said. "We call on Russia to withdraw their troops,” Borrell said.