US to impose sanctions on Belarus amid Ryanair diversion crisis 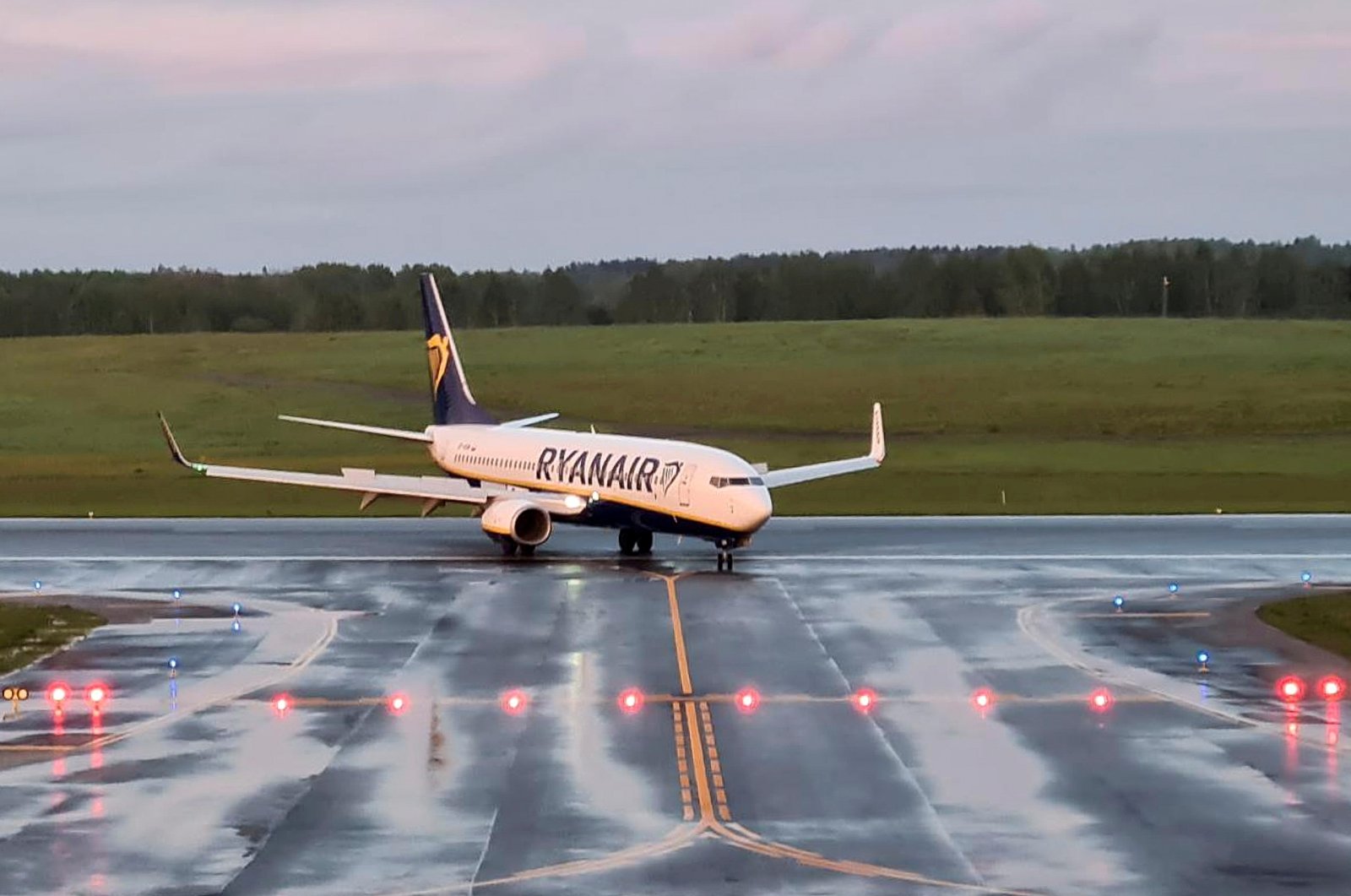 A Ryanair aircraft, which was carrying Belarusian dissident journalist Roman Protasevich and diverted to Belarus, where authorities detained him, lands at Vilnius Airport in Vilnius, Lithuania May 23, 2021. (Reuters Photo)
by French Press Agency - AFP May 29, 2021 9:35 am
RECOMMENDED

Washington announced sanctions against Belarus over the diversion of a Ryanair flight to arrest a dissident journalist, as President Alexander Lukashenko meets with Russian leader Vladimir Putin in Sochi.

White House Press Secretary Jen Psaki called for "a credible international investigation into the events of May 23," which she called "a direct affront to international norms."

Belarus scrambled a military jet to divert a Ryanair plane and arrested 26-year-old opposition journalist and activist Roman Protasevich who was on board, triggering a global outcry.

The White House announced it was working with the European Union on a list of targeted sanctions against key members of Lukashenko's government.

Meanwhile, economic sanctions against nine Belarusian state-owned enterprises, reimposed by Washington in April following a crackdown on pro-democracy protests, will come into effect on June 3.

Further U.S. moves on Belarus could target "those that support corruption, the abuse of human rights and attacks on democracy," Psaki said.

The White House also issued a "Do Not Travel" warning for Belarus to U.S. citizens and warned American passenger planes to "exercise extreme caution" if considering flying over Belarusian airspace.

However, Putin celebrated Russia's close ties with Belarus on Friday as he hosted Lukashenko in the Black Sea resort of Sochi.

With observers closely watching the talks to see how far the Kremlin would go to support the regime, the Russian leader said he was "very glad" to see Lukashenko and agreed with him the Western reaction was an "outburst of emotion."

Lukashenko complained the West was seeking to stir unrest in Belarus.

"An attempt is underway to rock the boat to reach the level of last August," he said, referring to anti-regime protests following a disputed election.

"It's clear what these Western friends want from us."

The Belarus strongman, who arrived with a briefcase, said he wanted to show Putin "some documents" related to the Ryanair incident and thanked him for his support in the latest standoff with the West.

The talks lasted for more than five hours but their results were not announced.

Over the past years, Lukashenko has had a volatile relationship with Moscow, playing it off against the West and ruling out outright unification with Russia.

But after the Ryanair plane incident, his options appear to be limited.

Putin and the Belarus leader have met regularly since August when historic protests broke out against Lukashenko's nearly three-decade rule.

The 66-year-old waged a ruthless crackdown on his opponents and has leaned increasingly on the Russian president amid condemnation from the West.

Several people died during the unrest in Belarus, thousands were detained and hundreds reported torture in prison.

The overflight ban has led to several cancellations of air journeys between Russia and Europe after Russian authorities rejected plans that would have skipped Belarusian airspace.

Russia insists the cancellations are purely "technical," but they have raised concerns that Moscow could be systematically refusing to let European airlines land if they avoid Belarus.

EU foreign policy chief Josep Borrell said the bloc was monitoring whether this was a broader policy from Russia, but Moscow insisted the disruptions were in no way political.

Belarus authorities claimed to have received a bomb threat against the Ryanair flight from Athens to Vilnius carrying the dissident.

Minsk said it demanded the flight land in the Belarus capital based on the message it said was sent from a ProtonMail address by Palestine's Hamas.

Protasevich, who helped organize the demonstrations against Lukashenko's rule last year, was arrested along with Russian girlfriend Sofia Sapega, 23, after the plane landed in the city.

Borrell has said proposals are "on the table" to target key sectors of the Belarusian economy including its oil products and potash sectors.

Belarus opposition leader Svetlana Tikhanovskaya on Friday urged the EU to be "braver" and impose more sanctions against the Minsk regime.

After meeting Dutch Prime Minister Mark Rutte in The Hague, Tikhanovskaya said measures being discussed by EU countries did not go far enough.

"No amount of repression, brutality or coercion will bring any legitimacy to your authoritarian regime," she said.

The European Commission president also wrote to the opposition offering a 3-billion-euro package to support "a democratic Belarus" if Lukashenko steps down.