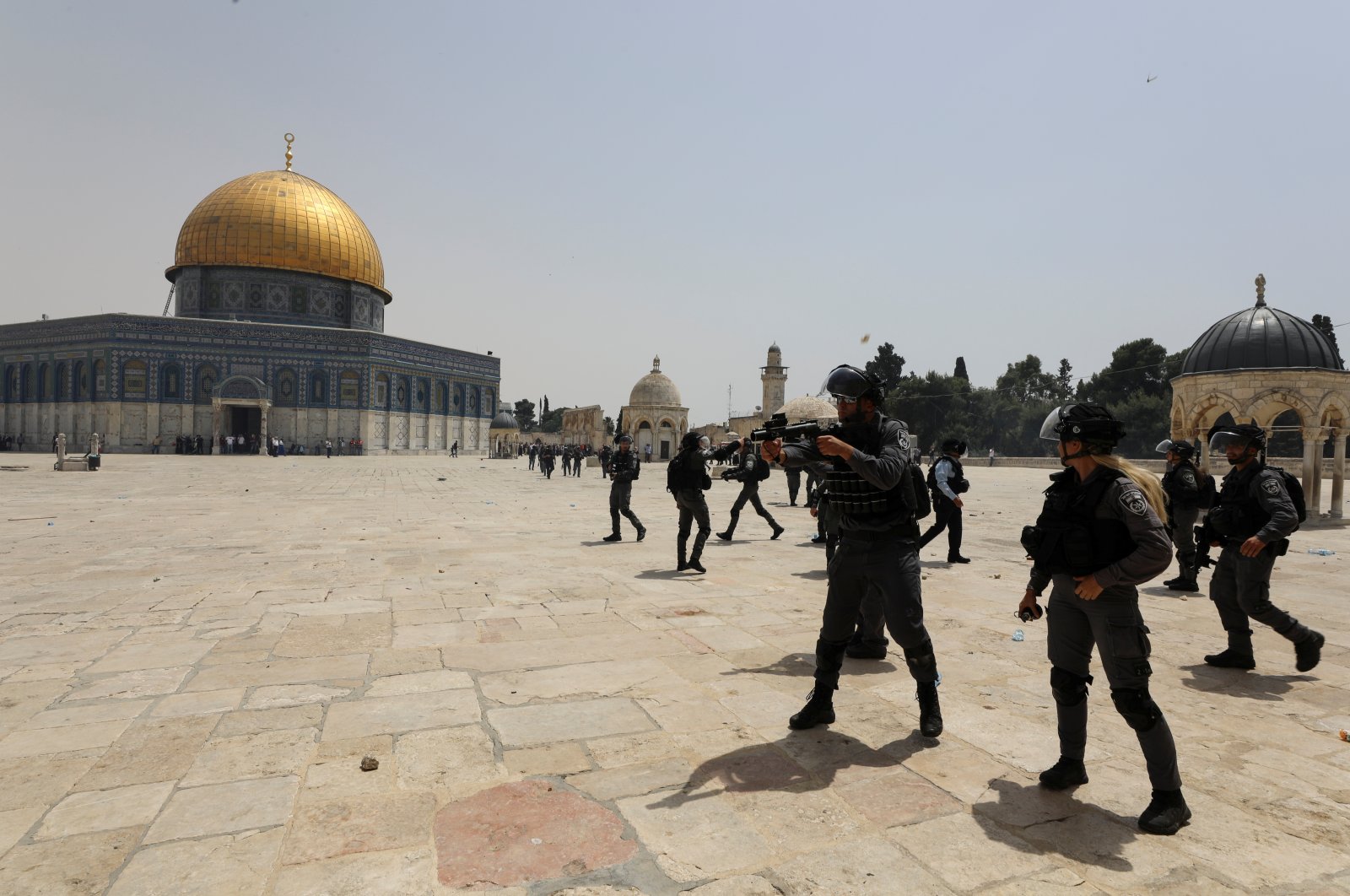 Israeli security forces stand in position during clashes with Palestinians at the compound that houses Al-Aqsa Mosque, known to Muslims as the Noble Sanctuary and to Jews as Temple Mount, in the Old City neighborhood of East Jerusalem, occupied Palestine, May 21, 2021. (Reuters Photo)
by DAILY SABAH WITH AA May 23, 2021 3:22 pm
RECOMMENDED

According to the Palestinian news agency WAFA, Israeli police on Sunday attacked and "excessively beat" Palestinians who were praying at the mosque in order to make way for Israeli settlers seeking to enter the flashpoint compound, the third most important site in Islam. The media outlet reported that at least six Palestinians have been arrested, including Fadi Allian, a guard at the mosque who tried to film the incident, and Ali Wazouz, an employee of the Islamic Waqf Council, a religious body appointed by Jordan to oversee the Al-Aqsa compound.

The Palestinian Foreign Ministry on Sunday warned that Israeli settler incursions into the Al-Aqsa Mosque compound in occupied East Jerusalem risk undermining efforts to maintain a cease-fire between Palestinians and Israel and revive the peace process.

Eyewitnesses told Anadolu Agency (AA) that Israeli police barred Palestinian young people from entering the site since dawn and imposed restrictions on the entry of worshippers into the complex.

The continued settler incursion "amount to a disregard of efforts aimed at stabilizing the calm and reviving the peace process," a ministry statement said.

The ministry condemned "the Israeli restrictions and siege on the Sheikh Jarrah neighborhood in East Jerusalem and the repression of its residents," warning that the Israeli violations jeopardize the cease-fire and revival of the peace process.

Tension escalated across the Palestinian territories since last month over an Israeli court verdict to evict Palestinian families from their homes in the Sheikh Jarrah neighborhood in favor of settlement groups. The situation worsened after Israeli forces raided the Al-Aqsa Mosque and assaulted worshippers inside. The tension spread to the Gaza Strip, with Israel launching airstrikes that killed at least 279 Palestinians dead, including 69 children and 40 women, and more than 1,900 others wounded.

The fighting, the fiercest in years, came to a halt on Friday under an Egyptian-brokered cease-fire. Israel occupied East Jerusalem, where Al-Aqsa is located, during the 1967 Arab-Israeli War. It annexed the entire city in 1980 in a move never recognized by the international community.