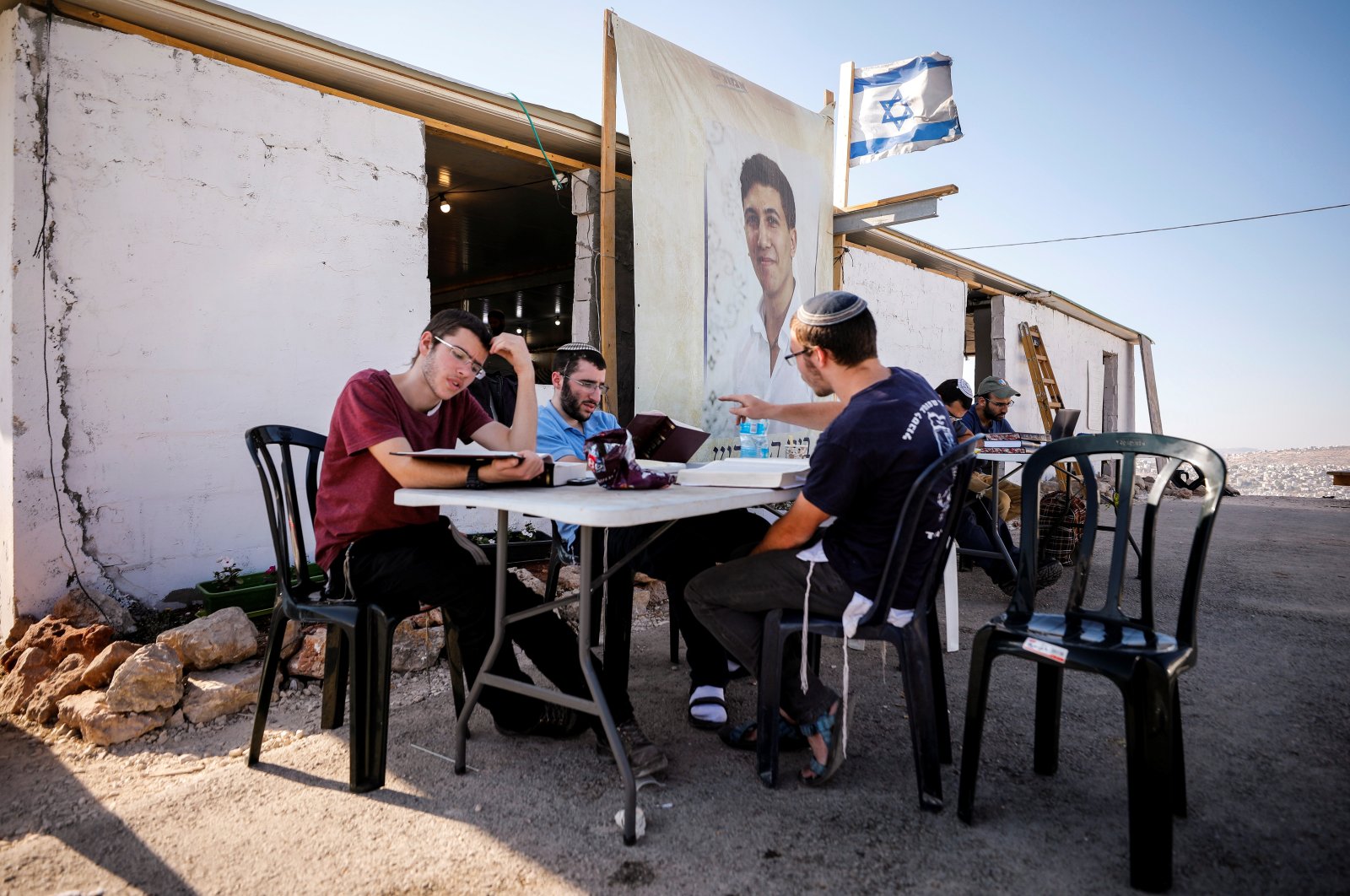 Jewish settlers study together in Givat Eviatar, a new Israeli settler outpost, near the Palestinian village of Beita in the Israeli-occupied West Bank June 23, 2021. (Reuters Photo)
by Daily Sabah with AFP
Jul 01, 2021 11:39 am

Israeli Prime Minister Naftali Bennett has announced a deal for Jewish settlers to leave an illegal outpost in the occupied West Bank by Friday, with a possibility of returning.

Settlers had built the Eviatar outpost near Nablus over recent weeks in defiance of both international and Israeli law, sparking fierce protests from Palestinians in neighboring villages. Bennett, who previously led a key settler lobbying group, on late Wednesday released details of the deal, which calls for Eviatar's inhabitants to leave by 4 p.m. Friday (1 p.m. GMT).

A letter outlining the terms of the previously reported arrangement confirmed that the settler's homes will remain at the site and the Israeli army – which has occupied the West Bank since 1967 – will establish a presence in the area.

Following the evacuation, the defense ministry "will perform a process of a land survey on the site as quickly as possible" to determine whether it can be labeled Israeli state land, the letter said. If the study declares it to be Israeli land, "a religious institution will be allowed to be built and accompanying residential quarters for it and for the yeshiva staff's families," the letter added.

The head of the northern West Bank settlement authority Yossi Dagan said the agreement was reached due to “tough times of division,” according to Israeli media.

All Jewish settlements in the West Bank are considered illegal by most of the international community. Palestinians in the nearby village of Beita, who claim Eviatar was built on their land, have categorically rejected any compromise other than a permanent evacuation of the settlers.

Four Palestinians have been killed and dozens wounded by Israeli troops in clashes over Eviatar, which lies near the Palestinian city of Nablus and close to several other settlements. The deaths came as Palestinians were protesting against the theft of over 5 acres (2 hectares) of their land. The territories were previously used for the cultivation of olives. Israeli forces frequently supported Jewish settlers and launched a major crackdown on Palestinians. According to experts, the tensions may simmer down for a while, but this is not the final end of the matter.

Anti-settlement group Peace Now blasted the Eviatar arrangement. "Politically, this agreement means that the new government doesn't want to confront even a small (albeit loud and forceful) minority," the group said in a statement. "Settlers can still do as they please."

Some 475,000 Israeli settlers live among 2.8 million Palestinians in the West Bank. Most of the world powers consider illegal all settlements built on land captured and occupied by Israel during the 1967 Middle East war. Israel disputes this, saying that the land tied to the country historically.

Last month, Amnesty International accused Tel Aviv of committing out a "catalog of violations against Palestinians" across Israel and occupied East Jerusalem, listing such violations as unlawful force against peaceful protesters, sweeping mass arrests, and subjecting detainees to torture and other ill-treatment during and after the recent 11-day conflict in the Gaza Strip.