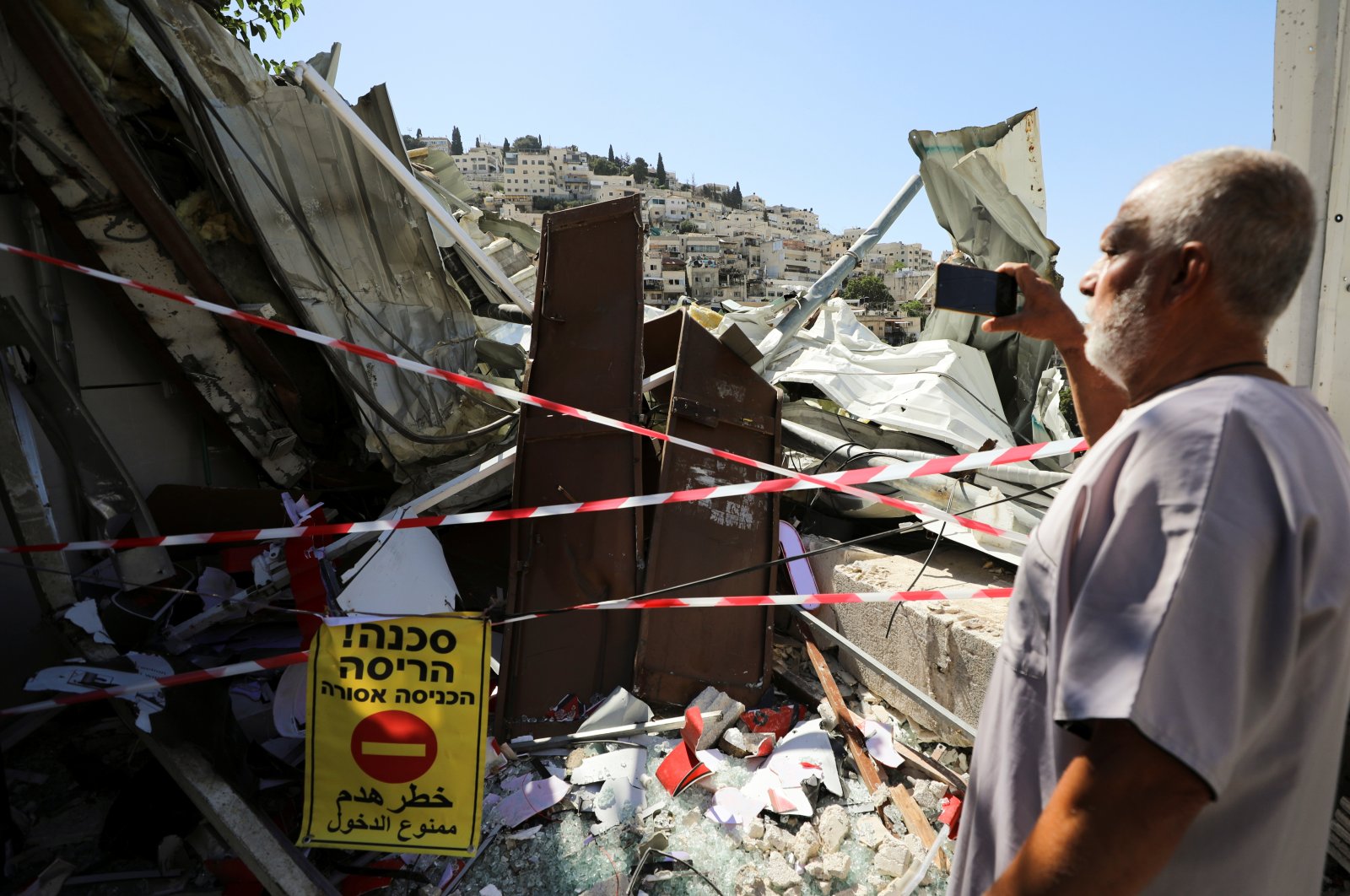 A Palestinian man uses his mobile phone as he stands near the debris of a shop that Israel demolished in the Palestinian neighborhood of Silwan in occupied East Jerusalem, Palestine, June 29, 2021. (Reuters Photo)
by Agencies Jun 30, 2021 12:32 pm
RECOMMENDED

The United States' largest Muslim advocacy organization on Tuesday called on the country's president, Joe Biden, to denounce Israel's demolition of Palestinian homes and businesses in occupied East Jerusalem as Tel Aviv continues its campaign in favor of Jewish settlers.

The Council on American-Islamic Relations (CAIR) urged Washington to pressure Israel to stop all appropriation of Palestinian property.

"Israel’s apartheid government is using American taxpayer dollars to engage in yet another campaign of ethnic cleansing against the Palestinians, this time in Silwan," CAIR National Executive Director Nihad Awad said in a statement. "They are illegally seizing the land of Palestinians, forcing families to destroy their own homes or face fines if the Israeli government destroys them.”

The CAIR chief said Biden and Secretary of State Antony Blinken have the political power to "defend the human rights of Palestinians and to speak out against injustice."

Israeli forces demolished a shop and an apartment in the Silwan neighborhood in occupied East Jerusalem on Tuesday, according to residents. They said authorities cited a lack of building permits for razing the two structures in the Al-Bustan and Al-Suwayeh quarters of the neighborhood.

The demolitions triggered clashes between Palestinians and Israeli police, which fired tear gas canisters and rubber-coated bullets to disperse protesters. The Palestinian Red Crescent said 13 medics were injured during the violence. According to Israeli state KAN TV channel, police detained four Palestinian teens who they claimed had launched fireworks toward officers.

Palestinians in Sheikh Jarrah face almost daily arrests. Some 28 Palestinian families who have resided in Sheikh Jarrah since 1956 are facing threats from Israeli authorities to be expelled from their homes in favor of Israeli extremist groups.

Local officials in Silwan had earlier warned of Israeli plans to demolish around 100 homes in the Al-Bustan quarter under the pretext that their owners lacked building permits.

The Palestinian Authority (PA ) says Israel intends from such demolition orders and expulsion of Palestinians from East Jerusalem to Judaize Jerusalem and to obliterate any Palestinian Arab identity in the city.

Meanwhile, in the occupied West Bank Jewish settlers have agreed to quit a remote outpost that has become a flashpoint for clashes with Palestinians who also claim the land, under a deal aimed at addressing an awkward political test for the new Israeli government.

Under the agreement with Prime Minister Naftali Bennett, the settlers will leave the Givat Eviatar outpost in the Israeli-occupied West Bank. But it seemed likely that at least some of the outpost's new buildings would remain, locked and under military guard, an outcome that is certain to anger Palestinian protesters who demand it be removed.

The hilltop settlement outpost near the Palestinian city of Nablus was established without Israeli government permits in May and is now home to more than 50 settler families.

The Israeli military ordered it to be cleared, presenting an early challenge for the new prime minister. Bennett was once a leader of the settler movement and heads a pro-settler party, putting him at odds with some of his own voter base if the settlers were forcibly evicted.

But his ruling coalition only survives with the support of left-wing and Israeli Arab parties, making sensitive policy decisions on the Israeli-Palestinian conflict difficult.

An official with the Israeli Defense Ministry, which administers the settlements, said the Givat Eviatar families had agreed to leave voluntarily by the weekend.

Troops would stay on and a land survey conducted to determine if a government-backed settlement can be established there, the official told Reuters.

Settler leader Yossi Dagan said the families would leave on Friday under the deal. The structures serving as their homes would be locked, he said, suggesting they would not be dismantled. The Defense Ministry official did not confirm that.

On Wednesday Moussa Hamayel, deputy mayor of the nearby Palestinian village Beita, said: "We will continue our popular activities (protests) until the settlement is removed and our land is returned to us." Beita's residents claim ownership of the area on which Givat Eviatar sits.

Most world powers deem all of the settlements, built on land Israel captured and occupied in a 1967 Middle East war, to be illegal. Israel disputes this, citing historical ties to the land on which they sit, and its own security needs.

Israeli soldiers have shot dead five Palestinians during stone-throwing protests since the outpost was set up, Palestinian officials said. The military did not comment on the fatalities but said troops used live fire only as a last resort.