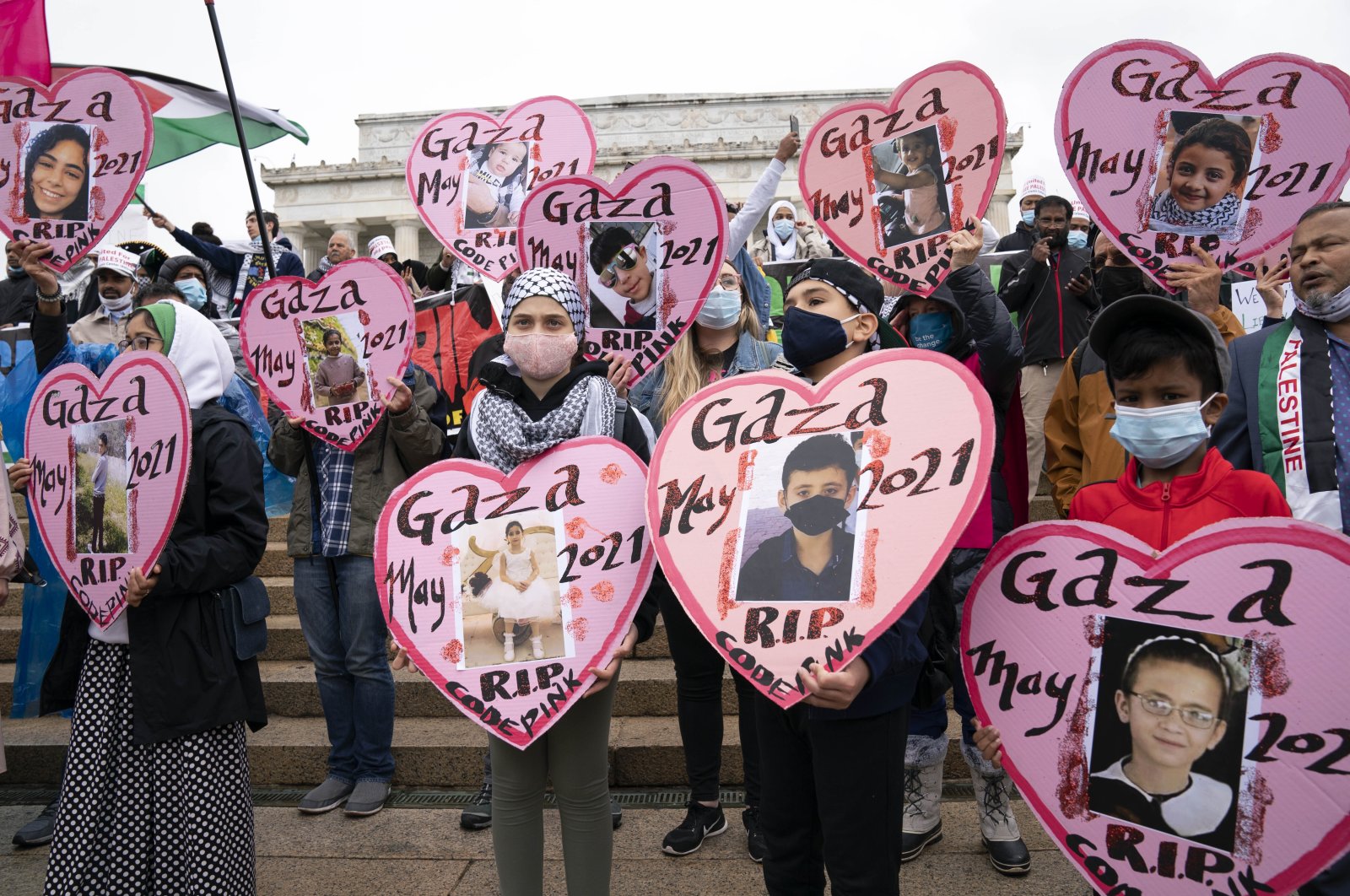 Palestinian supporters hold photographs of children who were killed by Israel, during the National March for Palestine demonstration at Lincoln Memorial, in Washington, D.C., U.S., May 29. 2021. (AP Photo)
by DAILY SABAH WITH AGENCIES Jun 01, 2021 1:12 pm

Heartbroken parents mourning the loss of their kids refuse to believe their loved ones are no longer with them. Israel brought destruction not only to Gaza, but also to the hearts of Palestinian families

Less than two weeks have passed since Israel halted its offensive on the Gaza Strip and announced an Egyptian-brokered cease-fire deal. The heavy fighting stopped, the noise from falling rockets and crumbling buildings subsided. But for the parents who lost their children in Israeli aggression, the heaviness of loss and the noise of tragedy pulse through their body and brain and burn up their hearts.

The Global Day of Parents being observed Tuesday brings painful memories for Palestinian parents. Yusuf al-Masri and his wife, proud parents until recently, are sitting near the cupboard of their children Ibraheem, 11, and Marwan, 7, arranging their clothes and smelling their school uniforms.

Mrs. al-Masri still cannot believe that she lost both her beloved sons in an Israeli bombing on May 10. Both of them were playing with their cousins in nearby fields while looking forward to tasting the choicest dishes their mother had prepared for breaking the fast on the 28th day of the holy month of Ramadan.

"We still believe whatever happened was a dream, I see my sons around me all the time, waiting for them join us at the dinner table, but they will return,” said al-Masri. He has now decided to hide the clothes of their departed children from his wife since her situation is becoming worse. "I try to hide my grief, but it's not easy seeing my wife in pain,” he said with deep bitterness.

Besides losing his two sons, al-Masri's brother Yousef also lost his son Ahmad, 21, who was preparing for his wedding; daughter Rahaf and an infant Yazan to the Israeli bombing. The parents recall the innocent mischiefs of their children and the happier times when they were together. Their mother was preparing to arrange their demands of toys for Eid al-Fitr. The new clothes she had brought for them to wear on Eid al-Fitr are staring at her.

"They were pampered children. All the money I earned was to fulfill their wishes. But they are gone now. The army killed them in cold blood,” Yousef told Anadolu Agency (AA) as his voice cracked up.

While in the field, Yusuf's sons were playing with a horse and their cousin Ahmad was collecting the harvest. Suddenly, the bombing turned the field into a pool of blood.

"Marwan was in first grade, he was a quiet boy. He performed really well in school,” said his father, while showing certificates of excellence he had received from the school. "His teacher was very sad. She talked about how it's very hard to bear the pain of losing her student,” said al-Masri.

The parents remember fights at the home on the choice of a TV show. The brothers preferred to watch Tom and Jerry and their sisters had their shows. Al-Masri has also stopped looking at the nearby internet cafe, where Ibraheem would play online games or practice his hobby of working on computers. The Palestinian father's phone is full of games that Ibraheem preferred to play, wishing he returns for a moment to play again. Born in 2010, after his five sisters, Ibraheem was a favorite for the entire extended family. "We celebrated many days when he was born. His grandmothers prepared many traditional foods for the celebrations,” Yousef said.

This attack by the Israeli army was not the al-Masri family's first. In the 2014 conflict, Israeli forces attacked Yousef's home and completely destroyed it. They lost all their memories including videos of celebrations. Earlier in 2008, as well when they were living on the east of Bit Hanon, their home was attacked and many of the family members were either killed or injured.

Today, Yusuf al-Masri said he is yet to emotionally compromise that his sons are no more.

"I keep calling them and then I recognize that they have passed away. My message to the world is to stop Israel from fabricating the lies and myths that it has woven to kill our children,” he said, adding that the Israeli government needs to be prosecuted for such heinous crimes of killing innocent children.

The latest bombardment is over, but its wreckage still litters the purple bedroom of 9-year-old Shrouq al-Masri and her 4-year-old sister, Razan. Their toys are coated in gray dust, the ceiling is bent and buckled and the cracks in the walls slice through the cartoons that decorated them. The two girls survived the early morning airstrike that destroyed a nearby building on May 19, two days before a cease-fire ended the war. But like so many children in Gaza, they will carry the memory of its horrors and devastation.

The 11-day conflict was the fourth fought between Israel and Palestinian resistance group Hamas, which has ruled Gaza since 2007. It featured the same waves of predawn Israeli airstrikes, the same continuous rocket fire out of the impoverished territory and the same lopsided casualty toll, with Palestinians making up the vast majority of the more than 250 killed.

In the Maghazi refugee camp in southern Gaza, an Israeli airstrike tore the roof off the bedroom that 4-year-old Anas Alhajahmed shared with his sister and left the floor covered in shattered glass. They survived as well. It was the first war in his short life, but most Gazans vividly recall the others – including the most devastating, in 2014, which lasted several weeks. Even adolescents can point out homes destroyed in previous rounds of fighting. Tel Aviv's brutality took its toll on those with the least capacity to understand its cruel logic.

Mahmoud al-Masri, 14, shared his room with six brothers. At 3 a.m., his family scrambled out of the building after the Israeli military warned them to evacuate. He didn’t think he would make it. The next morning, he was hesitant to return.

“I was afraid that after we returned we would be killed by a drone in another attack,” he said, according to remarks carried by The Associated Press (AP).

The survivors have even more hardship ahead as they struggle to rebuild. Israel and Egypt have imposed a crippling blockade on Gaza since Hamas seized power from rival Palestinian forces in 2007. Unemployment hovers around 50%.

Children in Gaza grow up amid poverty and high unemployment. They are unable to move or leave the territory freely due to the blockade imposed by Israel and Egypt. They live under the constant threat of war and the average 15-year-old would have survived four major Israeli offensives. Almost everyone in Gaza knows someone who has been killed due to Israel's aggression.

“When I think about the children who died,” Ola Abu Hasaballah, a child psychologist in Gaza told The New York Times, “I also think about the ones who survive, those who were pulled out of the rubble and lost a limb, or those who will go to school and see their friend is missing.”

Many Palestinian parents in grief and with their voice reduced to a whisper say “It’s God’s will” that they lost children. The wounds from the loss of the most precious thing in their life will never heal. They struggle to find explanation for their kid's death and understand what the little ones did that Israel bombed residential buildings with such hatred, knowing that among the multiple victims, the number of children would be huge. Palestinian parents said their children had wanted to be doctors, artists and leaders.

“I’m in disbelief,” said Saad Asaliyah, a taxi driver from Jabaliya, who lost his 10-year-old daughter. “I try to calm myself by saying it was God’s will for her to go.”

At least 67 children under age 18 were killed in Gaza during 11 days of Israel's deadly air campaign.