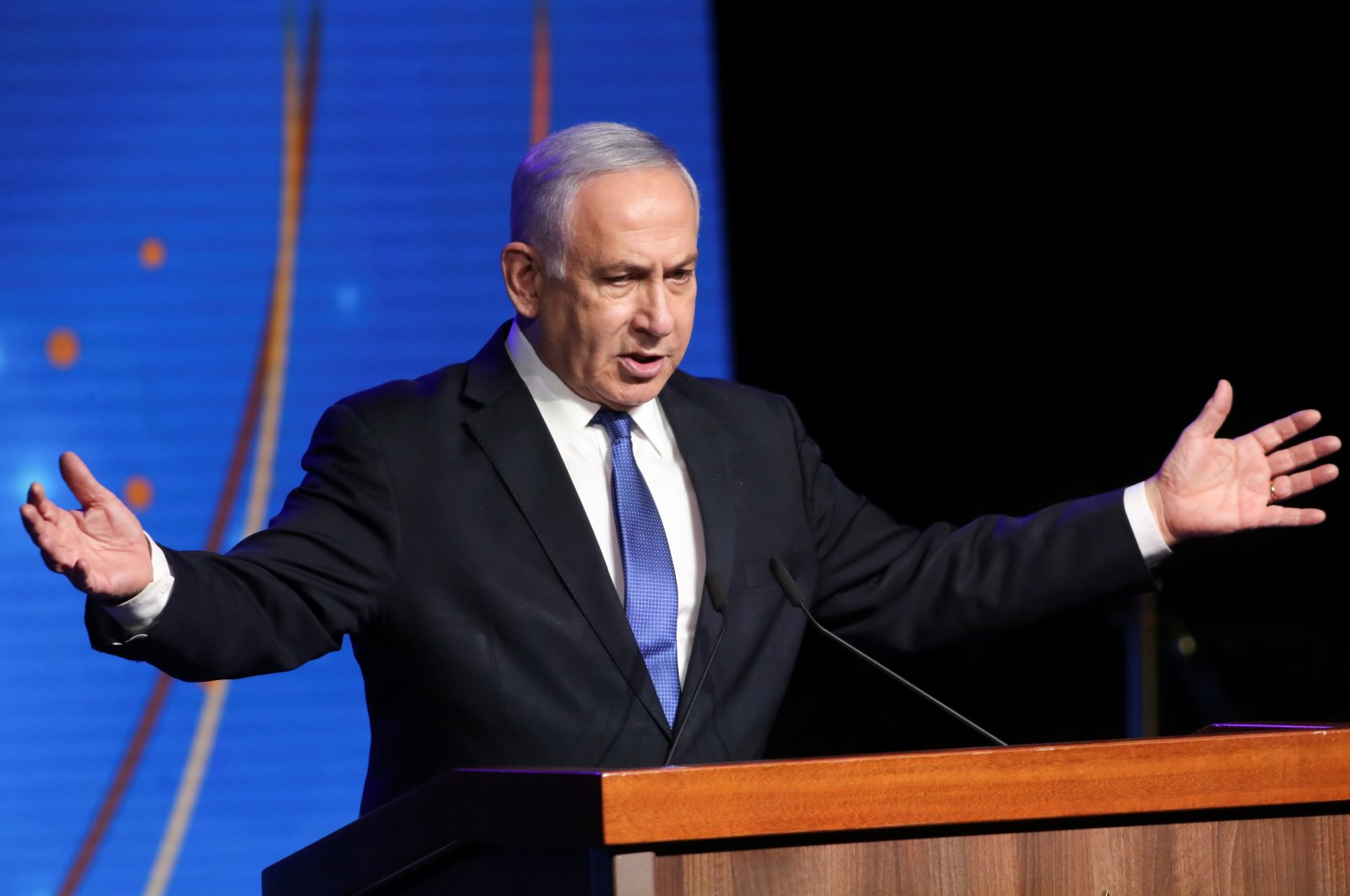 Israeli Prime Minister Benjamin Netanyahu speaks during a ceremony to show appreciation to the health sector for their contribution to the fight against the coronavirus disease in Jerusalem, Israel, June 6, 2021. (Reuters Photo)
by REUTERS Jun 07, 2021 10:43 am
RECOMMENDED

Israeli Prime Minister Benjamin Netanyahu called a newly formed coalition threatening to oust him "the greatest election fraud" in the history of democracy.

Hours after Netanyahu's comments, Naftali Bennett, a nationalist set to replace him as prime minister, called on Israel's longest-serving leader not to leave "scorched earth" behind and accept that "people are allowed to establish a government – even if you don't head it."

Netanyahu made his sweeping accusation at a time when Israel's domestic security chief warned publicly about the prospect of political violence.

"We are witnessing the greatest election fraud in the history of the country, in my opinion in the history of any democracy," Netanyahu said in comments to legislators from his right-wing Likud party. He focused his allegations on a broken campaign promise from Bennett, who had pledged not to partner with left-wing, centrist and Arab parties.

On Wednesday, Bennett announced with opposition leader Yair Lapid that they had formed a governing coalition with factions from across the political spectrum following an inconclusive March 23 election, Israel's fourth in two years. Under a rotation deal, Bennett will serve first as prime minister, followed by Lapid. No date has been set for a vote in parliament to approve the new government.

In a televised speech, Bennett called on Yariv Levin, parliament's speaker and a Netanyahu loyalist, not to try to buy time to encourage members of the new coalition to defect, and said he should hold the vote on Wednesday. There was no immediate comment from Levin.

"Let go. Let the country move forward," Bennett said, addressing his remarks to Netanyahu, who has been in office since 2009. "Mr. Netanyahu, don't leave scorched earth behind you. All of us, the entire nation, want to remember the good you did during your service."

Netanyahu's tenure has been clouded by a corruption trial, in which he has denied any wrongdoing, but he has won praise at home and abroad for Israel's quick rollout of COVID-19 vaccinations.

The prospective new government caps political jockeying since the election. People angry at the planned alliance have held protests outside the homes of opposition politicians, whose security has been beefed up after threats on social media.

"We, my friends and I in Likud, we will vehemently oppose the establishment of this dangerous government of fraud and surrender," Netanyahu said. "And if, God forbid, it is established, we will bring it down very quickly."

In a rare public warning, the head of the Shin Bet internal security agency said on Saturday that increasingly extreme online discourse could lead to violence. While condemning violence and incitement, Netanyahu, 71, repeated his designation of the Lapid-Bennett coalition as a leftist alliance that would put Israel at risk. He said the diverse partnership would be unable to stand up to Washington over Iran's nuclear program or confront Gaza's Hamas resistance group that fought with Israel for 11 days last month before the cease-fire went into effect.

Bennett, who heads the far-right Yamina party and advocates annexation of parts of the occupied West Bank, said Netanyahu's description of the coalition as being "extreme-leftist" was "another lie."