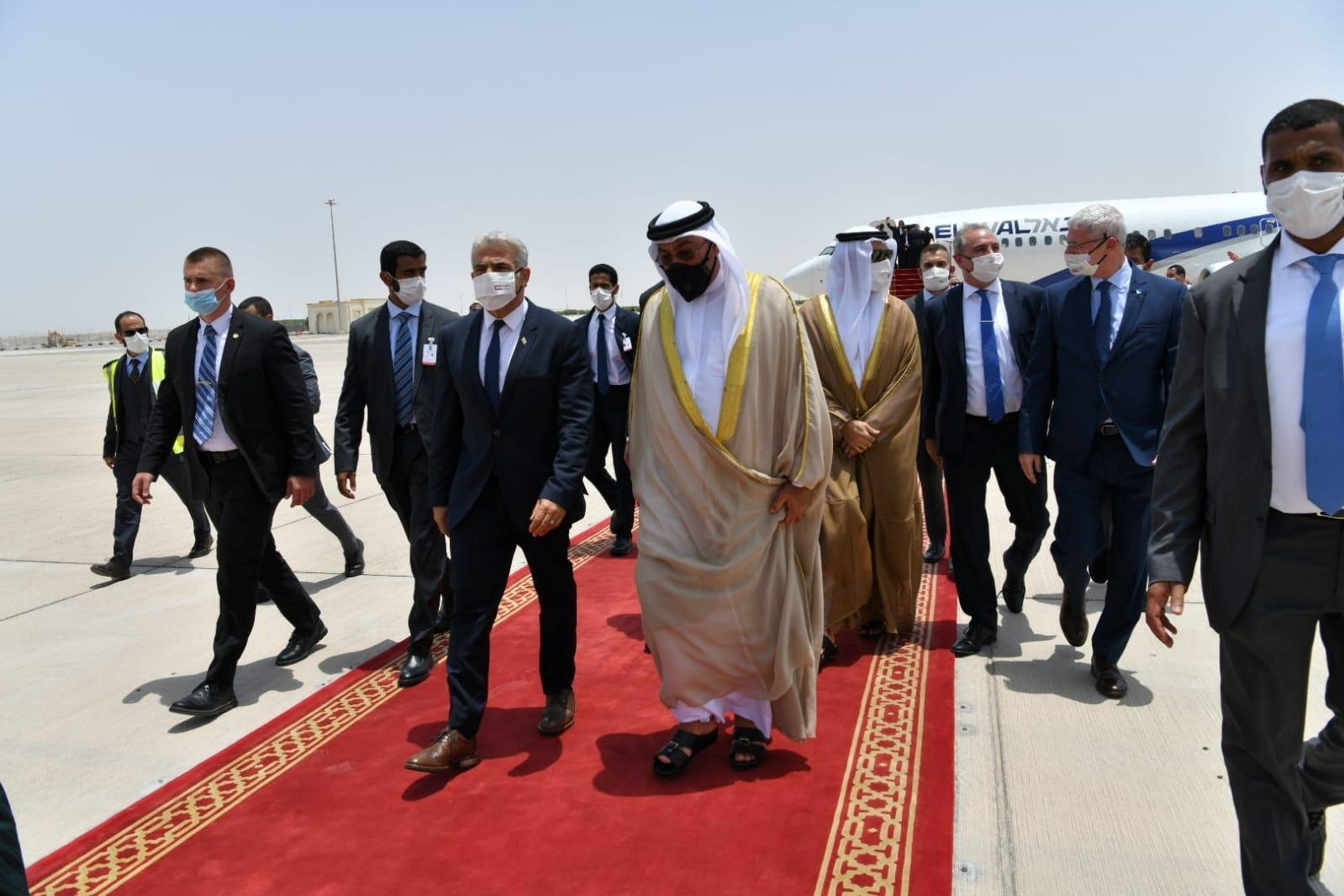 According to the Israeli Foreign Ministry, Yair Lapid is set to inaugurate Israel’s Embassy in the UAE capital of Abu Dhabi, meeting with senior Emirati officials – including Foreign Minister Sheikh Abdullah bin Zayed Al Nahyan – and attending a trade expo where Israeli companies are exhibiting technology.

The ministry described it as a "historic visit” to the Gulf emirate. Press access to the embassy opening in Abu Dhabi was strictly limited to state-linked Emirati media. Lapid landed at Abu Dhabi airport after earlier tweeting a picture of himself from inside a plane, with the caption: "Taking off for a historic visit to the UAE." Lapid's plane transited through Saudi airspace. Riyadh, although not having normalized relations with Israel, last year opened its skies to Israel-UAE flights.

Soon after his arrival in the UAE, Lapid told diplomats gathered at the inauguration of the Israeli Embassy in Abu Dhabi that the moment represented "the right to determine our fate by ourselves.” Israel, he said, isn’t going anywhere.

"The Middle East is our home. We’re here to stay. We call on all the countries of the region to recognize that. And to come talk to us,” he said, according to the speech released by Israel’s Foreign Ministry.

Israeli ministers have previously visited UAE, but newly appointed Lapid is the most senior Israeli to make the trip, and the first to travel on an official mission. According to Agence France-Presse (AFP), the head of mission at the Israeli Embassy to the UAE tweeted "30 years as a diplomat, but to see the blue and white (Israeli colors) here at the Abu Dhabi airport, whilst waiting for the minister of foreign affairs to land – is exciting!"

Israel and the UAE established full diplomatic relations last year under the Trump administration after the two countries signed the United States-brokered "Abraham Accords.” The UAE was joined by Bahrain in normalizing ties with Israel, becoming the third and fourth Arab states to sign peace deals with the Jewish state, after Egypt and Jordan.

In the nine months since the two countries signed the normalization agreement at the White House, Israel and the UAE have signed extensive trade and cooperation deals, and bilateral trade is already expected to have exceeded $354 million. More than 200,000 Israeli tourists have traveled to the UAE, the Foreign Ministry said.

Lapid took office as Israel’s foreign minister after Israel’s new government was sworn in earlier this month. The Future Party leader struck a power-sharing deal with Naftali Bennett, who became Israel’s prime minister at the head of a coalition of eight diverse parties, ranging from Israeli ultranationalists to a small Arab party.

Former Israeli Prime Minister Benjamin Netanyahu had repeatedly scheduled and postponed a visit to Abu Dhabi due to the coronavirus pandemic, but ultimately canceled the visit ahead of the March 23 elections due to a diplomatic spat with neighboring Jordan.

Netanyahu reportedly forbade members of his government from traveling to the UAE until he had a chance to make a state visit, according to Israeli media reports.

In acknowledgement of Netanyahu, Lapid told diplomats gathered at the Israeli Embassy event that the former prime minister is "the architect of the Abraham Accords” and that "this moment is his, no less than it is ours.”

Israeli Foreign Ministry spokesperson Lior Haiat told reporters after Lapid had departed for Abu Dhabi that the pace of bilateral cooperation between the two countries has been "unprecedented.” Tuesday's agreement will be the 12th between Israel and the UAE since then, Haiat said, according to remarks carried by The Associated Press (AP).

"There’s been years of under-the-radar relations between Israel and the UAE, and we are now enjoying the fruits of the infrastructure of peace that we’ve built in the last decades,” Haiat said. Israel and the UAE had long maintained clandestine security ties before normalizing relations last year due to their shared concerns about regional archenemy Iran.

The UAE formally opened its embassy in Tel Aviv, temporarily located in the Tel Aviv stock exchange, to little fanfare this month. Israel's Abu Dhabi embassy is also in a temporary location.

"We are planning for it to be a big one, an important one," Haiat said. "For the time being, we are talking about three diplomats."

On Wednesday, Lapid is to inaugurate Israel’s consulate in Dubai and visit the Israeli pavilion at the site of the World Fair's Expo in Dubai, which will open in October. Lapid is also due to meet with members of the expatriate Jewish community residing in Dubai.

The two countries faced a test of their bilateral relationship in early May when Israel launched bombardments on the Gaza Strip for 11 days, killing at least 256 Palestinians, including 66 children, and wounding nearly 2,000. Israeli airstrikes struck hospitals, educational centers, media offices and residential buildings, leaving thousands of people without shelter.

While the UAE took a critical stance over the forced expulsion of Palestinian families in occupied East Jerusalem's Sheikh Jarrah neighborhood and the storming of the Al-Aqsa Mosque, it remained more restrained on Israel's attacks on Gaza. Haiat told Qatar-based media outlet Al-Jazeera that from Israel’s perspective the conflict proved the endurance of normalization.

“It had no effect on the relationship between Israel and the Abraham Accords countries,” he said.

However, major demonstrations throughout the Arab world over Israel's bloody campaign in Gaza is a reminder of how the Emirates' official position does not match general public opinion.

Just days before the Egyptian-brokered cease-fire was announced in Gaza, Israel and the UAE inked a tax treaty to facilitate investments in their respective economies and eliminate double taxation. Haiat said it was “one of the most important agreements” reached to date.

Ofer Sachs, CEO of Herzog Strategic, an Israeli consulting firm with a presence in the UAE, said the treaty lifted major barriers to cross-country investment and is seen by the business community as a positive step. However, he said, most of the opportunities for deeper economic ties, which were discussed at the signing of the Abraham Accords, have not yet been realized.

Security will likely be the focus of Lapid's agenda during his visit to the UAE as his visit coincides with the ongoing efforts of the Biden administration to revive the Joint Comprehensive Plan of Action (JCPOA) – Iran's 2015 nuclear deal with world powers.

Israel and the UAE opposed the JCPOA and both supported the Trump administration's unilateral withdrawal from the pact in 2018. This agreement played a decisive role in advancing the Abraham Accords.

After Netanyahu courted former U.S. President Donald Trump, Lapid said he was seeking to restore strained relations between his country and the U.S. Democratic Party. Lapid met U.S. Secretary of State Antony Blinken Sunday in Rome and pledged that any objections by Israel to a new agreement with Iran would be passed on to Washington privately.