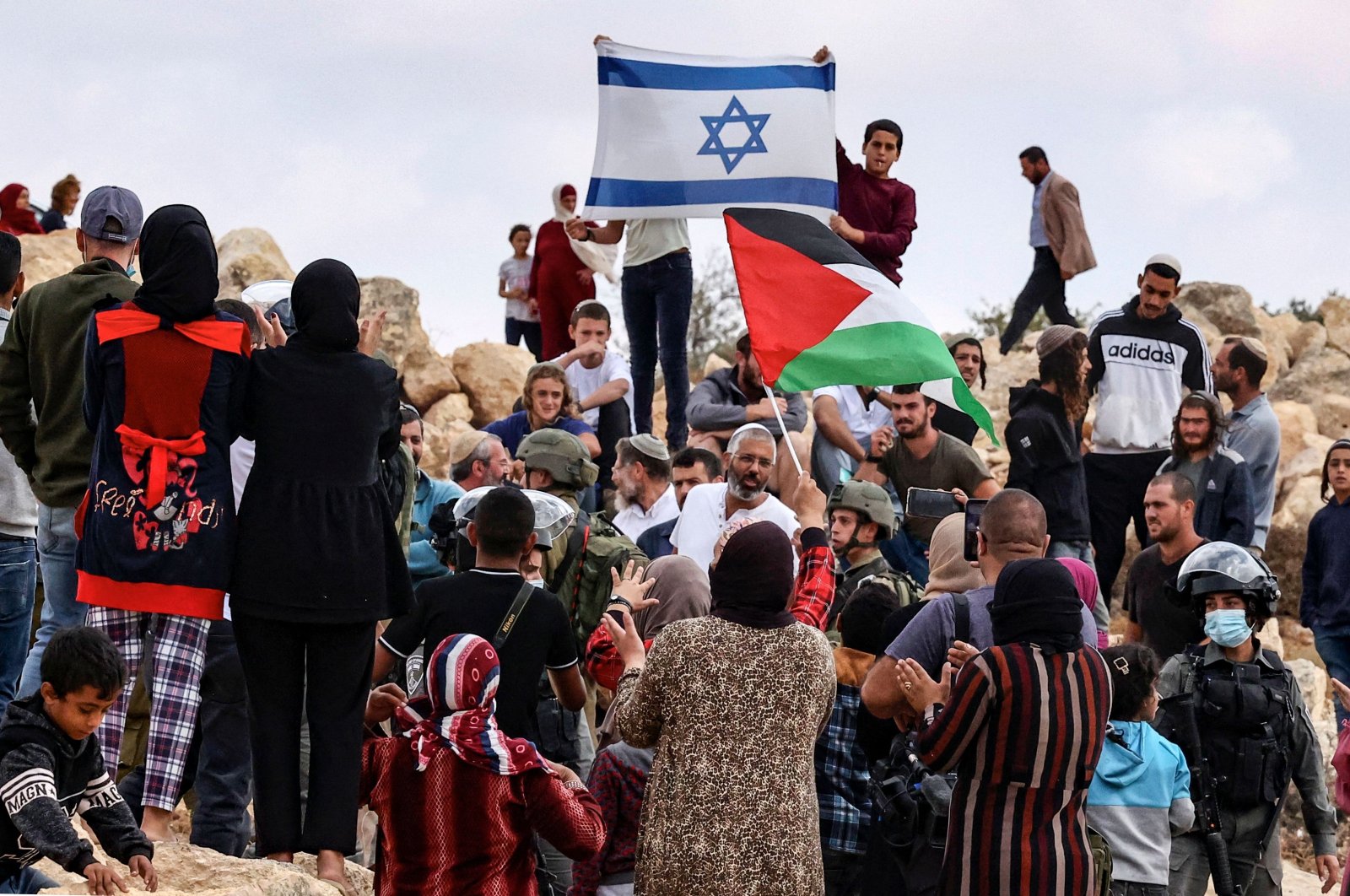 Palestinians from the village of Susya confront Jewish settlers from the settlement of the same name, as both sides raise their national flags, during the visit of representatives of the European Union to the area C (under Israeli administration) of the West Bank, on the outskirts of the village of Yatta, on Sept. 24, 2021. (AFP Photo)
by Agencies
Sep 30, 2021 3:41 pm

An Israeli settler attack in the West Bank that saw children attacked and livestock stabbed has drawn the ire of Foreign Minister Yair Lapid, who condemned the incident as "terror."

Dozens of masked Israeli settlers attacked Palestinians in the rural area of Mesafer Yatta in near the city of Hebron (El-Khalil). Twelve people, including a child, were injured.

Attackers, who even stabbed some goats owned by Palestinian farmers in the area, also threw stones at Palestinian houses and vehicles.

"This violent incident is horrific and it is terror. This isn’t the Israeli way and it isn’t the Jewish way,” Lapid said on Twitter.

Video of Tuesday's attack released by an Israeli rights group showed several shirtless settlers with scarves wrapped around their faces hurling stones at a cluster of homes and vehicles. Israeli troops stood among the settlers but did not appear to be taking any action to stop them. The Israeli military declined to comment.

Israeli police described it as a "friction incident” and said two Palestinians and a settler were arrested. It said people were wounded on both sides and that it is still investigating the incident after complaints were filed on Wednesday.

Later on Thursday, police said officers arrested three people – one of them a minor – suspected of assault and damaging property in connection with the incident.

Sami Hureini, a local Palestinian activist, told The Associated Press (AP) a group of Israeli settlers attacked a Palestinian shepherd near the village of Mufaqara and slaughtered four of his sheep. He said they then stormed the village itself, attacking residents with clubs and stones.

He said a four-year-old boy, Mohammed Bakr, was hospitalized with a head injury.

The Israeli human rights group B'Tselem released a video of the attack and provided a similar account. It said Israeli troops fired tear gas at Palestinian residents and arrested at least one Palestinian. An Israeli soldier can be seen throwing a tear gas grenade at the Palestinian who filmed the attack and then shoving him.

According to data from the Israeli Defense Ministry, a total of 370 incidents of violence perpetrated by Israeli settlers in the West Bank were reported in 2020, 42 of them against Israeli police and soldiers.

Israeli and Palestinian estimates indicate that there are about 650,000 settlers in the West Bank, including occupied Jerusalem, living in 164 settlements and 116 outposts.

Under international law, all Israeli settlements in the occupied territories, seized during the 1967 war, are considered illegal.

In addition to more than 120 authorized settlements, more radical settlers have established dozens of outposts in rural parts of the West Bank. Israeli authorities are reluctant to dismantle them because doing so usually ignites clashes between the settlers and security forces.

B'Tselem said the settlers who took part in the attack came from two nearby outposts, Avigayil and Havat Maon. The area has seen a series of recent settler attacks. B'Tselem and other rights groups say Israeli forces often turn a blind eye to settler violence or side with the settlers in clashes with Palestinians.

"What Palestinians endured yesterday in the South Hebron Hills is is one of the biggest attacks in broad daylight by settlers on a Palestinian community,” said Hagai El-Ad, the director of B’Tselem.

"But it needs to be understood that this is not just random settler violence. This is strategic. Israel aims to forcibly transfer Palestinians from large parts of the West Bank.”

The U.N. Mideast envoy, Tor Wennesland, told the U.N. Security Council on Wednesday that he is "deeply troubled" at the continuing loss of life and serious injuries in the Palestinian territories and "appalled that children continue to be victims of violence."

Between June 12 and Sept. 27, he said, 27 Palestinians including two women and five children were killed by Israeli security forces and 1,445 were injured, including 10 women and 152 children, during demonstrations, clashes, security operations and other incidents.

The U.N. special coordinator said Israeli security forces "must exercise maximum restraint and use lethal force only when it is strictly unavoidable in order to protect life."

Wennesland also expressed deep concern in the virtual briefing at continuing settler-related violence in the West Bank and East Jerusalem and said all perpetrators must be held accountable. He also called for a halt to Palestinian attacks toward Israeli population centers using rockets and incendiary devices.