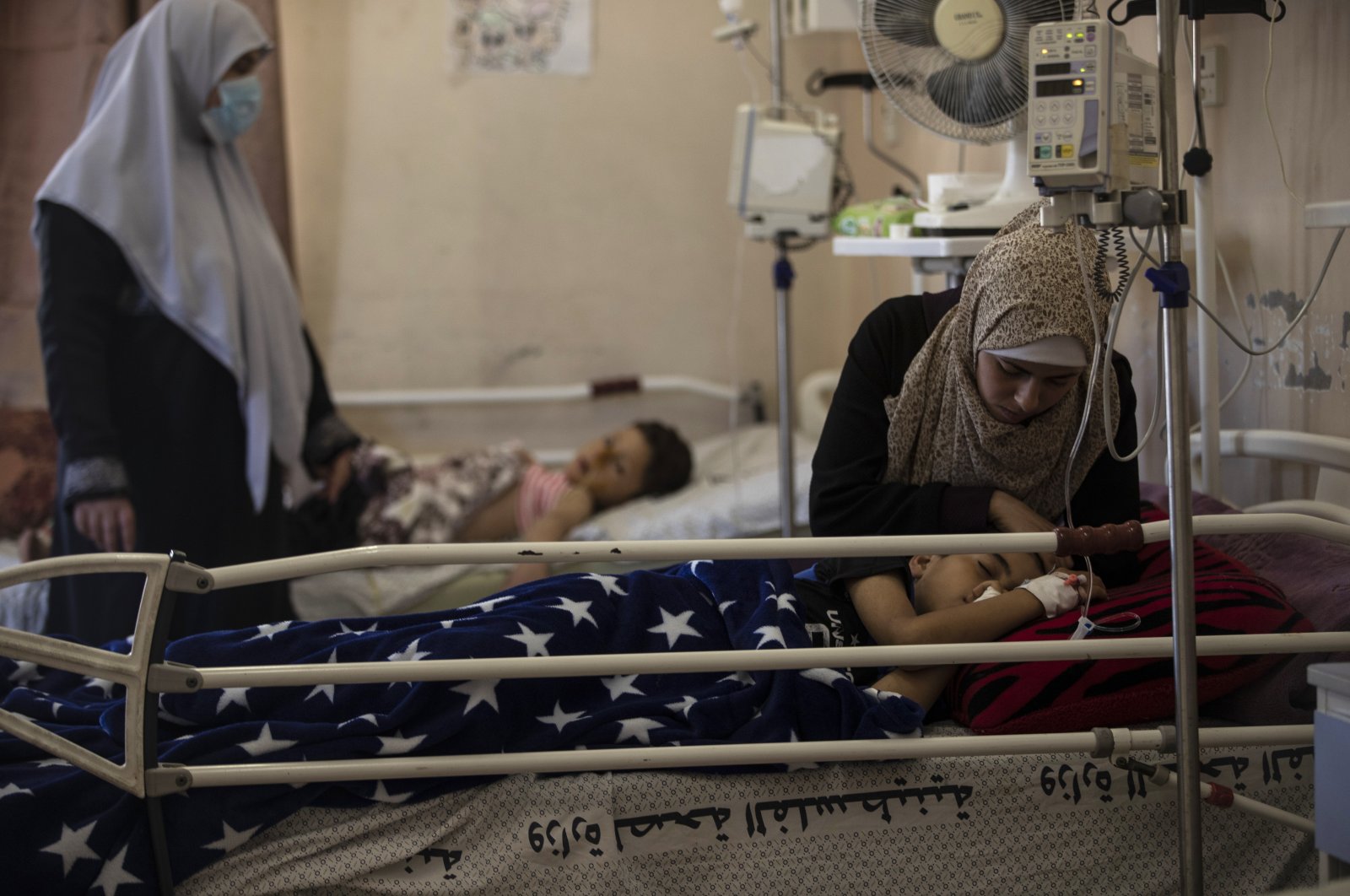 Already buckling under the pressure from a surge of coronavirus cases, the Gaza Strip’s stressed health system is on the brink of collapse after recent offensives by Israeli forces killed dozens and injured hundreds.

This week's conflict between Israel and Hamas in Gaza has killed 119 Palestinians, including 28 children, and wounded more than 620 people in the impoverished territory. Israeli airstrikes have pounded apartments, blown up cars and toppled buildings.

Distraught relatives didn't wait for ambulances, rushing the wounded by car or on foot to Shifa Hospital, the territory’s largest. Exhausted doctors hurried from patient to patient, frantically bandaging shrapnel wounds to stop the bleeding. Others gathered at the hospital morgue, waiting with stretchers to remove the bodies for burial.

At the Indonesia Hospital in the northern town of Jabaliya, the clinic overflowed after bombs fell nearby. Blood was everywhere, with victims lying on the floors of hallways. Relatives crowded the emergency room, crying out for loved ones and cursing Israel.

“Before the military attacks, we had major shortages and could barely manage with the second (virus) wave,” said Gaza Health Ministry official Abdelatif al-Hajj by phone as bombs thundered in the background. “Now, casualties are coming from all directions, really critical casualties. I fear a total collapse."

Gutted by years of conflict, the impoverished health care system in the territory of more than 2 million people has always been vulnerable. Bitter division between Hamas and the West Bank-based Palestinian Authority and a nearly 14-year blockade imposed by Israel with Egypt's help also has strangled the infrastructure. There are shortages of equipment and supplies such as blood bags, surgical lamps, anesthesia and antibiotics. Personal protection gear, breathing machines and oxygen tanks remain even scarcer.

Last month, Gaza's daily coronavirus cases and deaths hit record highs, fueled by the spread of a variant that first appeared in Britain, the relaxation of movement restrictions during Ramadan, and deepening public apathy and intransigence.

In the bomb-scarred territory where the unemployment rate is 50%, the need for personal survival often trumps the pleas of public health experts. While virus testing remains limited, the outbreak has infected more than 105,700 people, according to health authorities, and killed 976.

As cases climbed last year, stirring fears of a health care catastrophe, authorities set aside clinics just for COVID-19 patients. But that changed as airstrikes pummeled the territory.

Nurses at the European Hospital in the town of Khan Younis, desperately needing room for the wounded, moved dozens of virus patients in the middle of the night to a different building, said hospital director Yousef al-Akkad. Its surgeons and specialists, who had deployed elsewhere for the virus, rushed back to treat head injuries, fractures and abdominal wounds.

If the conflict intensifies, the hospital won't be able to care for the virus patients, al-Akkad said.

“We have only 15 intensive care beds, and all I can do is pray,” he said, adding that because the hospital lacks surgical supplies and expertise, he’s already arranged to send one child to Egypt for reconstructive shoulder surgery. “I pray these airstrikes will stop soon.”

At Shifa, authorities also moved the wounded into its 30 beds that had been set aside for virus patients. Thursday night was the quietest this week for the ICU, as bombs had largely fallen elsewhere in Gaza. Patients with broken bones and other wounds lay amid the din of beeping monitors, intercoms and occasional shouts by doctors. A few relatives huddled around them, recounting the chaotic barrage.

“About 12 people down in one airstrike. It was 6 p.m. in the street. Some were killed, including my two cousins and young sister. It’s like this every day,” said 22-year-old Atallah al-Masri, sitting beside his wounded brother, Ghassan.

“The Gaza Strip is under siege for 14 years, and the health sector is exhausted. Then comes the coronavirus pandemic,” he said, adding that most of the equipment is as old as the blockade and can't be sent out for repairs.

Now, his teams, already strained by virus cases, are treating bombing victims, more than half of whom are critical cases needing surgery.

“They work relentlessly,” he added

Israel, already under pressure from an International Criminal Court (ICC) investigation into possible war crimes during the 2014 war, reiterated this week that it is warning people living in targeted areas to flee. The airstrikes have killed civilians and inflicted damage on Gaza's infrastructure.

The violence has also closed a few dozen health centers conducting coronavirus tests, said Sacha Bootsma, director of the WHO's Gaza office. This week, authorities conducted some 300 tests a day, compared with 3,000 before the fighting began.

The U.N. Relief and Works Agency, or UNRWA, ordered staff to stay home from its 22 clinics for their safety. Those now-closed centers had also administered coronavirus vaccines, a precious resource in a place that waited months to receive a limited shipment from the U.N.-backed COVAX program. Those doses will expire in just a few weeks and get thrown away, with “huge implications for authorities' ability to mobilize additional vaccines in the future," Bootsma said.

For the newly wounded, however, the virus remains an afterthought.

The last thing that Mohammad Nassar remembers before an airstrike hit was walking home with a friend on a street. When he came to, he said, “we found ourselves lying on the ground.”

Now the 31-year-old is hooked up to a tangle of tubes and monitors in the Shifa Hospital surgical ward, with a broken right arm and a shrapnel wound in his stomach.