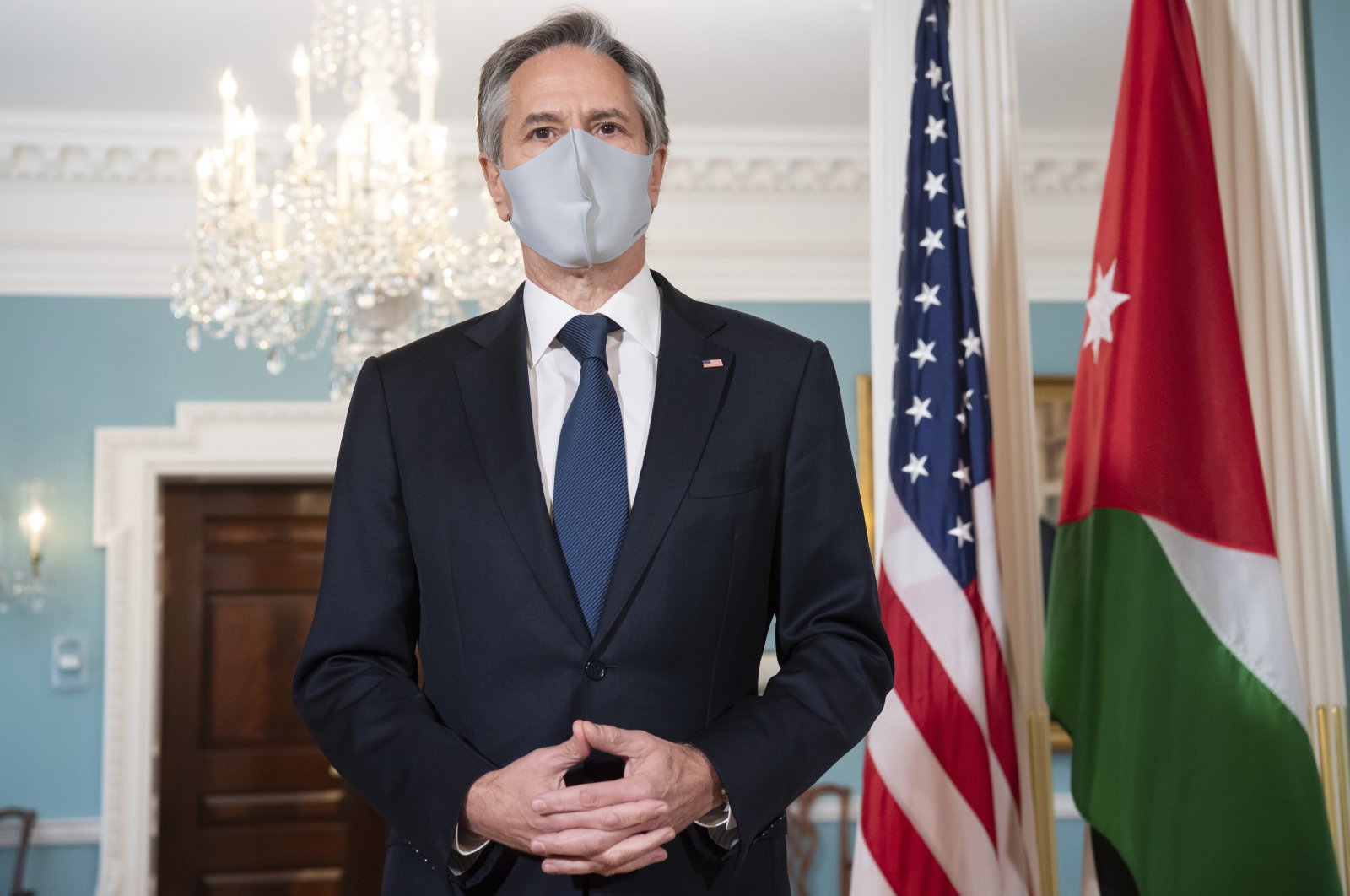 United States Secretary of State Antony Blinken with Jordanian Foreign Minister Ayman Safadi speak to the media prior to a meeting at the State Department in Washington, U.S., May 10, 2021. (AP Photo)
by Daily Sabah with AFP May 10, 2021 11:00 pm
RECOMMENDED

The United States Secretary of State Antony Blinken said Monday that Israel and Palestine needed to take steps to lower tensions as he urged both sides to de-escalate the situation amid a day where Israeli attacks on Palestine spiked.

"All sides need to de-escalate, reduce tensions, take practical steps to calm things down," Blinken said as he met his Jordanian counterpart in Washington.

Blinken's statement came after late Monday, an Israeli airstrike killed 20 Palestinians in northern Gaza, according to the Strip's Health Ministry which added that nine children were among the victims.

Meanwhile, Blinken also praised steps taken by Israel over the past day partly in response to concerns led by the U.S., including rerouting a flashpoint parade meant to celebrate Israel's capture of East Jerusalem from Jordan in 1967.

Blinken also pointed to the postponement of a decision on the eviction of Palestinian families in East Jerusalem's Sheikh Jarrah neighborhood, an immediate trigger for the violence that has left hundreds injured in the holy city.

"But it's imperative for all sides to take steps to de-escalate the situation," Blinken said, as quoted by Agence France-Presse (AFP).

Jordanian Foreign Minister Ayman Safadi said that East Jerusalem was a "red line" for the kingdom, which has a peace treaty with Israel and maintains a custodial role in the Al-Aqsa Mosque, known to Muslims as Al-Haram al-Sharif.

"Our focus right now is on ensuring that the escalation stops, and for that to happen we believe that all illegal, provocative measures against the peoples of Sheikh Jarrah or in terms of violations into al-Haram must stop," Safadi said.

Tensions spiked in Jerusalem in recent weeks as Palestinians have protested against Israel's restrictions on access to parts of the Old City during the Muslim holy month of Ramadan, and after authorities ordered several Palestinian families to leave their homes to make way for Israeli settlers.

Since Friday, Israeli police have been attacking Palestinian worshippers in the Jerusalem holy site, the Al-Aqsa Mosque. Almost 300 Palestinian protesters were injured over the weekend and hundreds more Monday, following renewed raids and attacks by the Israeli police.

The attack on Islam's third holiest site and around East Jerusalem comes after Israel's decision to evict Palestinians from their homes. The evictions, added with the violence, have drawn condemnation from several countries.