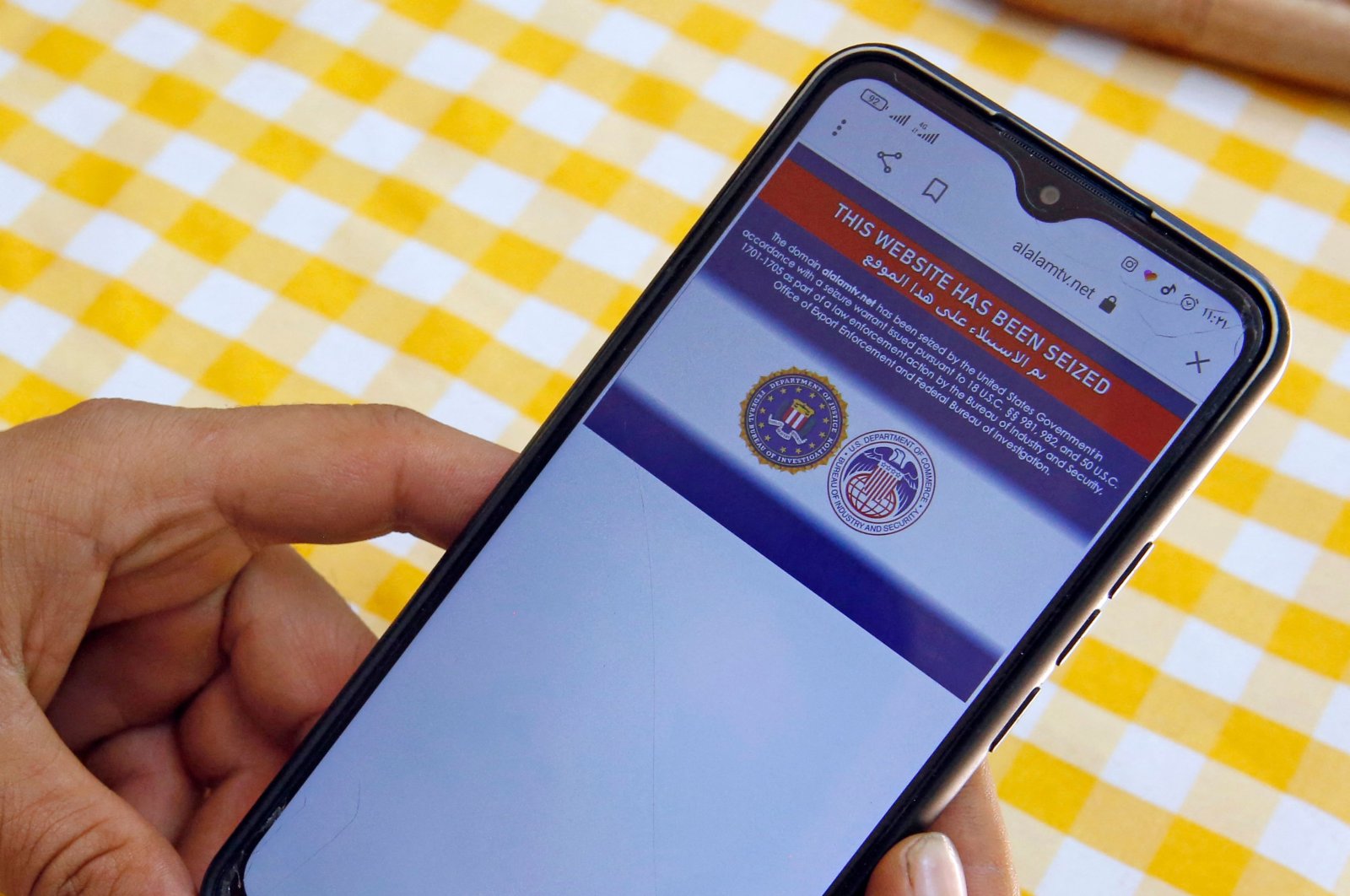 The U.S. Justice Department took down the Iranian government-affiliated media sites – as well as others by Houthi, Palestinian and Bahrainian outlets – arguing that they were operating on American-owned domains, violating sanctions

U.S. authorities seized a range of Iran’s state-linked news website domains they accused of spreading "disinformation” Tuesday, an American official said, a move that appeared to be a far-reaching crackdown on Iranian media amid heightened tensions between the two countries.

The official, who spoke on condition of anonymity because the case had not yet been officially announced by the American government, said the U.S. had effectively taken down roughly three dozen websites, the majority linked to Iranian disinformation efforts. Iran's Islamic Radios and Televisions Union (IRTVU), which is reportedly run by the Islamic Revolutionary Guard Corps' (IRGC) Quds Force, announced the U.S. government seizures without providing further information.

Both IRTVU and the IRGC were blacklisted by U.S. sanctions, making it illegal for Americans, U.S. companies and foreign or non-American companies with U.S. subsidiaries to do business with them or their subsidiaries. In total, IRTVU operates 33 websites. It accused Washington of repressing freedom of expression and uniting forces with Israel and Saudi Arabia “to block pro-resistance media outlets exposing the crimes of U.S. allies in the region.”

Bahrain’s LuaLua TV, run by opposition groups with offices in London and Beirut, was also taken down by the United States.

On Monday, Raisi staked out a hard-line position in his first news conference. He ruled out the possibilities of meeting with President Joe Biden or negotiating Tehran’s ballistic missile program or its support for regional militias – concerns the Biden administration wants addressed in future talks.

Relations between Iran and the U.S. have deteriorated for years following then-President Donald Trump's withdrawal from Tehran's nuclear deal and the return of devastating sanctions on the country. That decision has seen Iran, over time, gradually abandon every limit on uranium enrichment.

The country is now enriching uranium to 60%, its highest level ever, though still short of weapons-grade levels. Iran provides support to militant groups in the region, such as Lebanon’s Hezbollah and Yemen’s Houthi rebels, as it seeks to wield its influence far afield and counter its foes.

On Tuesday, attempts to visit a handful of websites – including Iranian state television’s English-language arm Press TV, Yemen's Houthi-run Al-Masirah satellite news channel and Iranian state TV’s Arabic-language channel Al-Alam – produced a federal takedown notice. It said the websites were seized "as part of law enforcement action” by the U.S. Bureau of Industry and Security, Office of Export Enforcement and the Federal Bureau of Investigation.

The U.S. government also took over the domain name of the news website Palestine Today, which reflects the viewpoints of Gaza-based resistance groups Hamas and Islamic Jihad, redirecting the site to the same takedown notice.

Press TV, launched in June 2007, is the state-run Islamic Republic of Iran Broadcasting’s (IRIB) English-language service. Its Iran-based website PressTV.ir was not affected. Most of the domains seized appeared to be ".net,” ".com” and ".tv” domains.

The first two are generic top-level domains as opposed to country-specific domains, while ".tv” is owned by the Pacific island nation of Tuvalu but administered by the U.S. company Verisign. Seizing a domain on a major country-specific top-level domain such as Iran's ".ir” would likely produce widespread international condemnation as a violation of sovereignty. It’s not the first time that the U.S. has seized domain names of sites it accuses of spreading disinformation.

Tehran said Wednesday that the U.S. seizure of websites was "not constructive" for ongoing negotiations on bringing Washington back into a landmark nuclear deal.

"We are using all international and legal means to ... condemn ... this mistaken policy of the United States," the director of the president's office, Mahmoud Vaezi, told reporters. "It appears not constructive when talks for a deal on the nuclear issue are underway."

Last October, the Department of Justice announced the takedown of nearly a hundred websites linked to Iran’s powerful Revolutionary Guard. The U.S. said the sites, operating under the guise of genuine news outlets, were waging a "global disinformation campaign” to influence U.S. policy and push Iranian propaganda around the world.

Yemen's Houthi rebel group announced that its Al-Masirah satellite news channel went offline Tuesday without prior notice. It said the channel would continue in its mission of "confronting the American and Israeli acts of piracy against our nation, by any means.” The Houthis labeled the move as “American piracy and copyright confiscation.”

“The government of the United States of America is banning the Al-Masirah website without any justification or even prior notice,” they said.

Cybersecurity researchers at RiskIQ found a total of 24 seized sites sharing the same Amazon name server. There are no private television or radio stations in Iran. Satellite dishes, while widespread, also are illegal. That leaves IRIB with a monopoly on domestic airwaves.

Marzieh Hashemi, a prominent Press TV anchorperson who, in 2019, was arrested as a material witness in an unspecified criminal case and has appeared before a grand jury in Washington, told The Associated Press (AP) that the channel was struggling to "figure out the reasons” for the seizure.

While airing in Iran, Press TV focuses predominantly on international affairs through the lens of how leaders in Tehran see the world. Fierce criticism of British and American foreign policy is common.

Since the 1979 Islamic Revolution, IRIB has been in the hands of hard-liners who back Iran’s government. Press TV supporters view the site's editorial line as anti-Zionist, but the station has previously had problems with Western authorities for its reporting. The Anti-Defamation League has criticized the channel as "one of the world’s leading dispensers of conspiratorial anti-Semitism in English.”