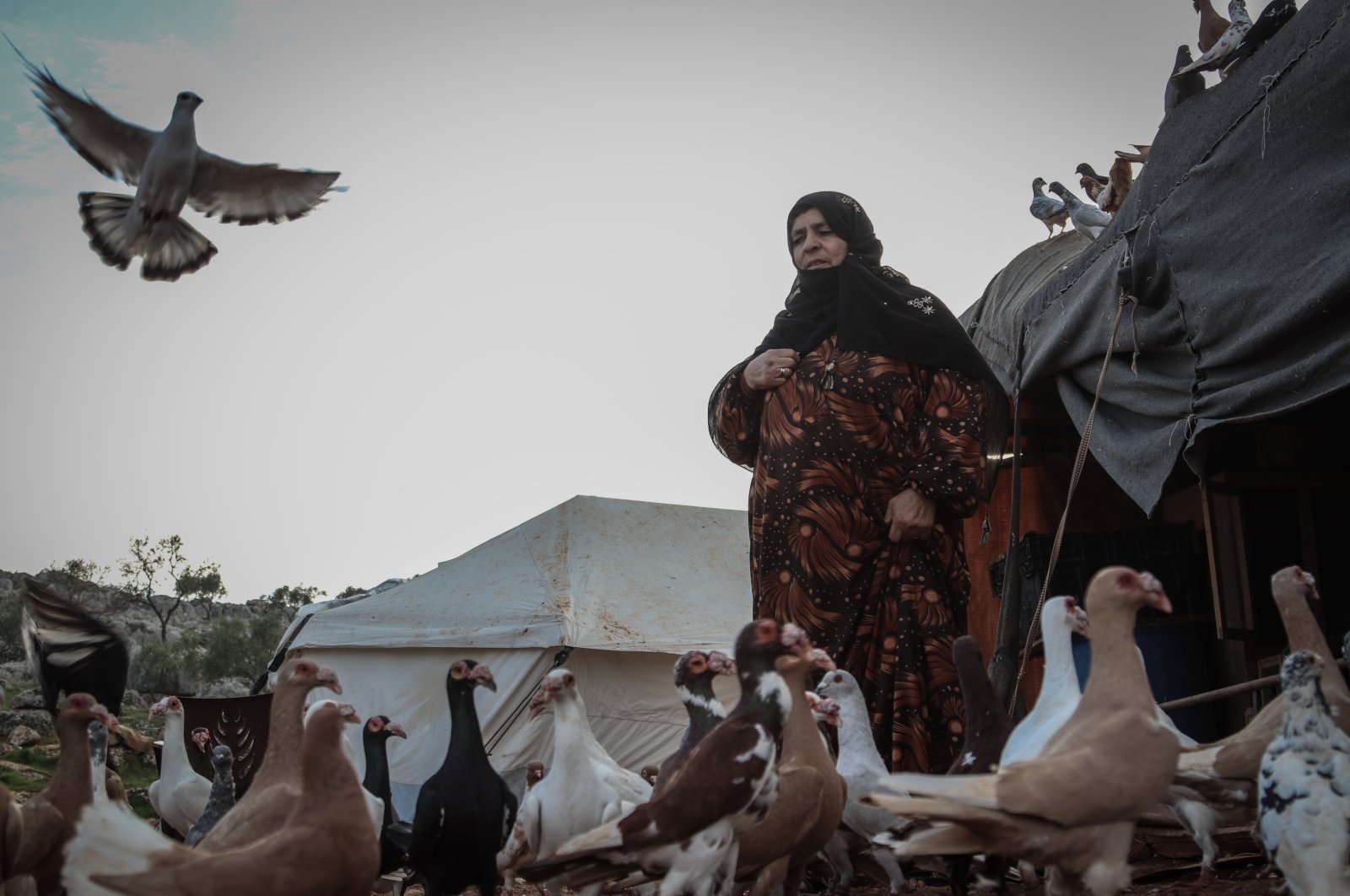 Heyam al-Nehar, a woman who lost two children to the brutal war in Syria, finds peace in her pigeons in a refugee camp in northwestern Syria's Idlib province.

Moving from Aleppo to the Turkish border due to Bashar Assad regime's attacks, al-Nehar stated that she is still thankful for her life, despite everything she has been through.

"At least I have a tent to live in. I have moved with my pigeons. In fact, I moved them out of Aleppo before my children," she told Anadolu Agency (AA) and added "I am very happy with them."

Al-Nehar allows her pigeons to go out when it is warm outside and keep them inside when it is cold.

"I spend my day with my pigeons. I feed them and find peace with them," she said.

Losing two of her children to the regime attacks, al-Nehar said that she struggles to take care of her pigeons in the camp environment.

"Still, no matter what, I will remain a happy person. My children and relatives are with me. Even though it is not like it used to be back in our village, life goes on," she continued.

For years, the Assad regime has ignored the needs and safety of the Syrian people, only eyeing further territorial gains and crushing the opposition. In pursuit of this aim, the regime has been bombing vital facilities like schools, hospitals and residential areas for years, causing the displacement of almost half of the country’s population, while adopting policies to make their lives even more difficult.

Since December 2019, almost 1 million people have fled the Assad regime’s offensive on Idlib, considered the last opposition bastion, with many seeking refuge in overcrowded tent camps near the Turkish border. A fragile truce was brokered between Moscow and Ankara in March 2020 in response to the months of fighting by the Russia-backed forces, but the regime still frequently carries out attacks on civilians, hindering most from returning to their homes and forcing them to seek safety at makeshift camps.

The already difficult lives of Syrian people living in rural Idlib's tent camps have become much harder due to the recent winter conditions. As the humanitarian catastrophe in the region has reached new heights, people try to survive by taking shelter under trees or in shaky tents built on mud and puddles.

Launched on Jan. 13, 2020, in coordination with Turkey's Disaster and Emergency Management Presidency (AFAD), the "We are together, We are siding with Idlib" aid campaign received major support from other Turkish aid organizations, including from the Turkish Red Crescent (Kızılay), the Humanitarian Relief Foundation (IHH), the Sadakataşı Association, the Türkiye Diyanet Foundation and many more. Apart from the aid organizations, Turkish people have also contributed heavily to the project, providing more than TL 1 billion ($140 million) in cash, so far.

Back in June 2020, Erdoğan pledged to fund the construction of 50 briquette homes for civilians in Idlib, saying Turkey planned to fulfill the target during the summer so the shelters would be ready for the refugees before winter sets in. First lady Emine Erdoğan also donated funds to subsidize 57 briquette homes. Although Turkish officials and charities continue their efforts to provide humanitarian aid, there are still thousands more who need urgent assistance from the international community.

Losing their loved ones to the 10-year civil war, the displaced Syrians who have recently moved to the briquette houses are grateful for this major development in their lives, while dreaming of a better life.

Meanwhile, contributing to Turkey's overall efforts in the region, the central province of Kayseri has funded the building of 538 briquette houses called "Goodness Houses" through Turkey's Diyanet Foundation (TDV).

While the refugees continue to settle in the already constructed houses, new ones are being built every day to provide shelter for the whole refugee community.

Speaking to AA, Şahin Güven, the mufti of Kayseri, said that so far 10,000 houses have been built in the region.

"The houses consist of two rooms, a kitchen, a bath and a toilet. All the infrastructure necessary is being constructed. We cover the buildings with concrete and the entrance doors are built of steel. They are being built in a way that a family can comfortably live in," Güven said and added that the initial plan has been expanded to provide more space in each house.

"We want to improve the quality of the buildings every day so that they can be more sustainable," he expressed, pointing out the 10-year-long suffering of the refugees under heavy rains and floods in tent camps.

The philanthropists in Kayseri are also building two mosques in the region.

So far, Istanbul has become the province with the most contributions to the project, followed by Kayseri, Konya and Ankara, respectfully.

"Our aim is to beat Istanbul. We are competing over aid work," Güven highlighted.