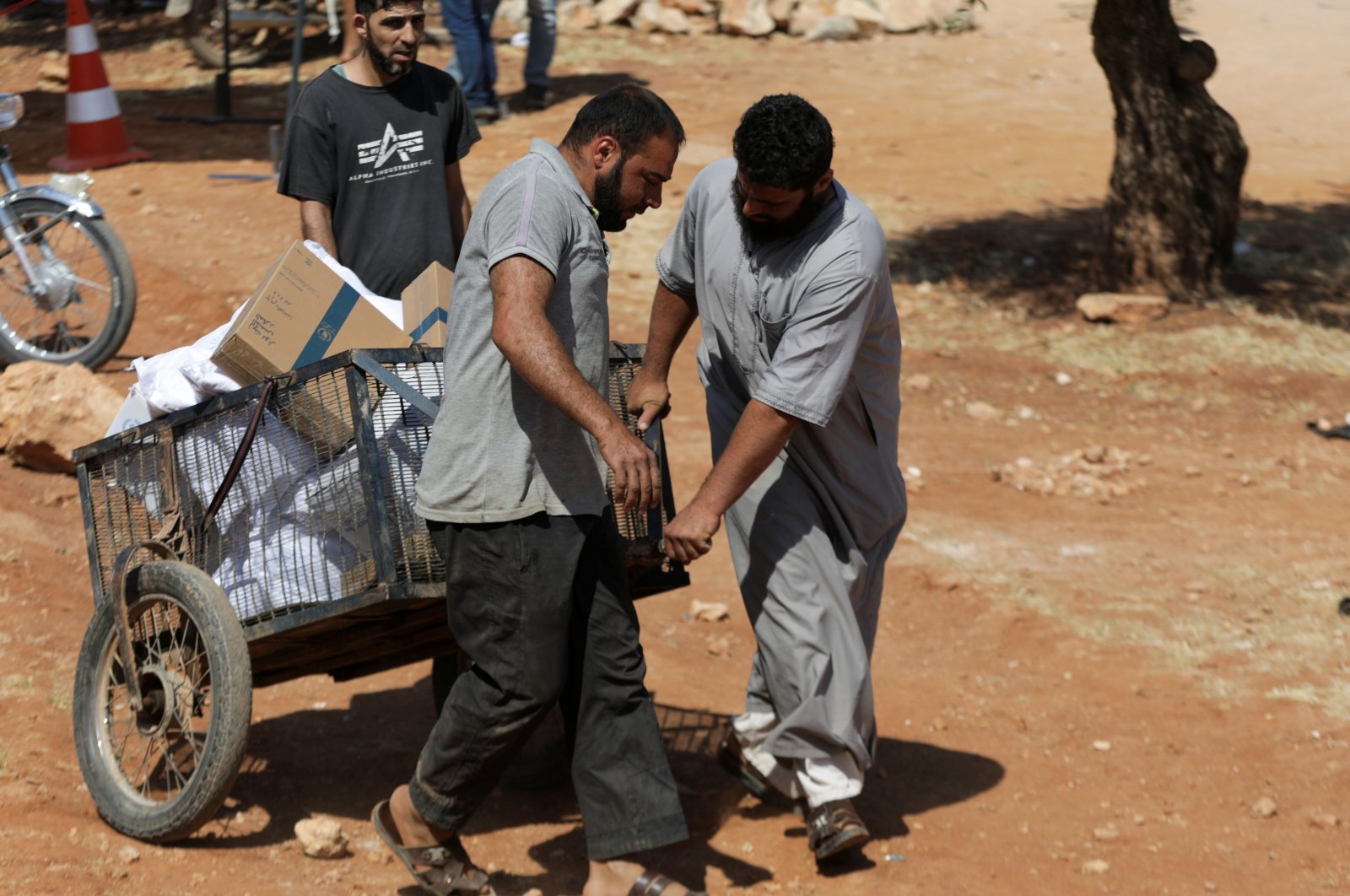 A proposal to reopen a border crossing from Iraq to northeastern Syria for delivering humanitarian aid is "a non-starter," Russia's United Nation ambassador said Wednesday as he also refused to say what will happen to the only crossing now in operation, from Turkey to the country’s opposition-held northwest. He underlined that the U.N. authorization of cross-border humanitarian aid to Syria without Damascus' agreement will eventually stop, without giving a timeframe.

A U.N. Security Council draft resolution proposes sending aid through both crossings, but Vassily Nebenzia said at a news conference that Russia is discussing only the possible continuation of deliveries through the Bab al-Hawa crossing to Idlib in northwest Syria. He refused to say whether Russia will vote to keep it open or use its veto to close it.

Russia has come under intense pressure from the U.N., U.S., European nations and others who warn of dire humanitarian consequences for over a million Syrians if all border crossings are closed.

Nebenzia was commenting on a draft resolution circulated to the Security Council last Friday that would keep Bab al-Hawa open and reopen the Al-Yaroubiya crossing from Iraq in the northeast that was closed in January 2020.

So today, aid can only be delivered through the Bab al-Hawa crossing, and its mandate ends July 10.

Russian Foreign Minister Sergey Lavrov has accused Western donors, who are the major providers of humanitarian aid to Syria, of “blackmailing” Moscow by threatening to cut humanitarian financing for its close ally Syria if the mandate for Bab al-Hawa is not extended.

“We consider it is important to resist such approaches,” he said in a recent oral statement conveyed to U.N. Secretary-General Antonio Guterres and obtained last week by The Associated Press (AP).

“We believe that further concessions to the Americans and Europeans under the pressure of financial threats will undermine the credibility of the United Nations, its Charter and the Security Council’s resolutions.”

Nebenzia reiterated Russia’s criticism of cross-border aid and said humanitarian assistance should be delivered across conflict lines within Syria to reinforce the Syrian regime’s sovereignty over the entire country.

He reiterated Lavrov’s criticism of the continuous attempts since April 2020 to block a convoy by the United Nations, International Committee of the Red Cross and Syrian Arab Red Crescent to Idlib from Syria’s capital, Damascus. The Russian minister blamed Hayat Tahrir al-Sham, the strongest militant group in Idlib, for refusing to allow the cross-line delivery.

Nebenzia was pressed at a news conference on Russia’s reaction to the resolution, which was drafted by Ireland and Norway, both serving two-year terms on the Security Council. The draft was discussed Wednesday by council experts for the first time, he said.

The Russian ambassador said he told Ireland and Norway “in the very beginning that what we hear from our colleagues about reopening the closed cross-border points is really a non-starter.”

That appears to doom Al-Yaroubiya’s reopening.

U.S. Ambassador Linda Thomas-Greenfield, who recently visited the Bab al-Hawa crossing, expressed disappointment Friday that the draft resolution didn’t call for aid deliveries through three crossings, including the second crossing from Turkey to the northwest at Bab al-Salam, which was closed last July.

“Millions of Syrians are struggling, and without urgent action, millions more will be cut off from food, clean water, medicine and COVID-19 vaccines,” she said.

Nebenzia said the Syrian regime wants to close cross-border deliveries, and dismissed claims there is no alternative.

There were predictions of “disaster” when Al-Yaroubiya was closed, “but today facts on the ground confirm, and the U.N. says that they have increased humanitarian assistance to the northeast ... through the cooperation with the Syrian government,” he said.

He said cross-border aid was approved in 2014 “in special circumstances when there was no access to many parts of Syria.”

“But, of course, today it is now an outdated operation and eventually it will be closed,” he said.

Asked whether he didn’t see the need for even a single crossing now, Nebenzia said: “I will not give you a definitive answer at this time. I will only tell you we continue consulting on this issue.”

Turkey on Wednesday said it wanted the sole border crossing for aid into Syria to remain open, adding that it was holding talks at the U.N. Security Council to address Russia's reluctance.

The Bab al-Hawa crossing from Turkey into Syria will close on July 10 unless it receives authorization to stay open for another year by the United Nations Security Council (UNSC), where Russia wields veto power.

Turkey has supported opposition fighters against Assad throughout the decadelong conflict and has a military presence in northern Syria.

"The U.N. Security Council should extend the mandate concerning this border crossing," Turkish Foreign Minister Mevlüt Çauşoğlu said after talks with his Russian counterpart Lavrov in the southern Turkish resort of Antalya.

"What can we do to overcome Russia's hesitations? We are also holding talks with the U.N. Security Council members," he said. "This is a humanitarian issue, not a political one."

The United States warned Monday that Russia would put at risk hopes for more constructive relations if it used its U.N. veto to shut the border crossing.

Guterres last week urged all Security Council nations to reach a consensus to preserve the crossing, which allows aid to reach some 3 million people living in Syria's Idlib region.

Civilians taking shelter in camps along the frontier between Turkey and northwestern Syria have called for keeping the Bab al-Hawa border crossing open for aid transfer, which is essential for them to survive.

The woes of millions of civilians, who fled attacks by the Assad regime and its supporters, escalated after Russia insisted on allowing the delivery of aid only through the Bab al-Hawa crossing into the country.

Al-Ahmad Gaymis, a Syrian civilian who migrated from Maarat al-Numan district and took shelter in the al-Rahma refugee camp in Idlib, fears that if the Bab al-Hawa border crossing is closed to aid, his two sick children will not be able to find medicine.

"We have been taking medicines for a year and a half. We will continue to take them for two more years. They have to use them every day. Otherwise, their disease will get worse," Gaymis told Anadolu Agency (AA).

"If the Bab al-Hawa border crossing is closed, my children's medication will not be available," he said. "What are the crimes of these innocent children to be deprived of medicine?"

For his part, Anas Gabi, who had to migrate from the village of Maar Shurin south of Idlib city a year and a half ago and took shelter in the camp, said their only way to remain alive is by keeping the Bab al-Hawa crossing open.

"Russia, which has destroyed our homes and bombed our cities, is now seeking to close the border crossing," he said. "All aid and medicine enter through this terminal. Closing this gate means death for millions of refugees living here."

Muhammed Fahid, another Syrian refugee at al-Andalus camp, said: "I am calling out to all the authorities from here; if they close the door (the people) will starve to death."

"Closing the terminal means waging a second war on the people. We are calling out to all foreign and Arab officials from here. Don't close them," he said.

Dozens of nongovernmental organizations (NGOs) operating in Syria have made an appeal against the closure of the Bab al-Hawa terminal between Turkey and Syria, the last lifeline for more than 3 million Syrians.