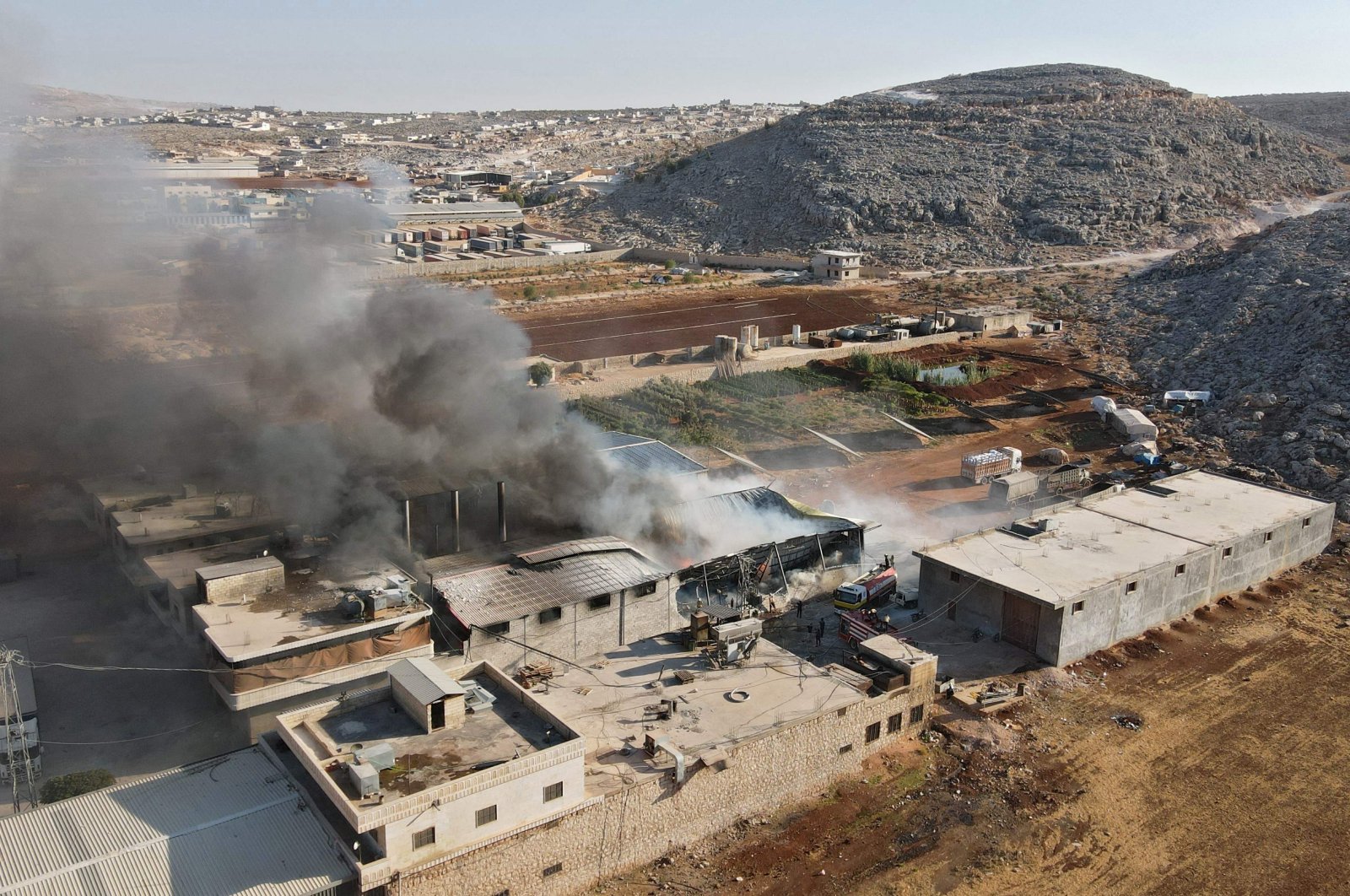 An aerial view shows smoke billowing from a warehouse after reported shelling on the town of Sarmada in Idlib province, northwestern Syria, Oct. 16, 2021. (AFP Photo)
by Daily Sabah with AP Oct 17, 2021 11:35 am
RECOMMENDED

Shelling by Assad regime forces of an opposition-held town in northern Syria near the border with Turkey on Saturday killed four people and wounded more than a dozen, Syrian opposition activists said.

The shelling of the town of Sarmada comes amid increasing tensions in the last opposition stronghold in the Syrian northwest, where a truce reached in March last year has been repeatedly violated in recent weeks.

The opposition’s Syrian Civil Defense group, more popularly known as the White Helmets, said the shelling was concentrated on Sarmada and a road linking it with the border crossing point of Bab al-Hawa with Turkey. The White Helmets also said that four people had been killed but gave a higher number of wounded, 23.

Russia joined Syria’s now 10-year conflict in September 2015, when the regime's military appeared close to collapse. Moscow has since helped tip the balance of power in favor of Assad, whose forces now control much of the country. Hundreds of Russian troops are deployed across Syria, and they also have a military air base along Syria’s Mediterranean coast.

In other developments, a roadside bomb hit a Turkish military convoy on Friday night, killing two soldiers and wounding five on the road leading to Bab al-Hawa, according to Turkish media and the SOHR.

The region, consisting of parts of Idlib and Aleppo provinces, is home to about 4 million people, many of them displaced by Syria’s 10-year conflict. The conflict that began in March 2011 killed hundreds of thousands and displaced half the country’s pre-war population of 23 million, including more than 5 million refugees who are now outside the war-torn nation.

Turkey and Russia discussed the developments in Syria’s northwest most recently during a visit of President Recep Tayyip Erdoğan to the Black Sea resort Sochi.

Foreign Minister Mevlüt Çavuşoğlu held follow-up talks on the issue with Russian Foreign Minister Sergey Lavrov on the sidelines of the Non-Aligned Movement (NAM) summit in Serbia on Monday.

Turkey "remains committed" to every decision agreed with Russia on Syria, and there is "no stepping back," said Erdoğan following the meeting.

Erdoğan also told Putin he believes there are great benefits in "Turkey and Russia keeping stronger relations each passing day."

Both leaders hailed their three-hour meeting in Sochi to discuss the Syrian conflict, describing the exchange as "useful" and "productive."

Turkey continues to fulfill its responsibilities in order to maintain the cease-fire and stability in northwestern Syria's Idlib region, the Defense Ministry also said.

Turkey and Russia will continue to coordinate on diplomatic and military lines to fully normalize the situation in Syria, the country's Foreign Ministry spokesperson Maria Zakharova also said last week.