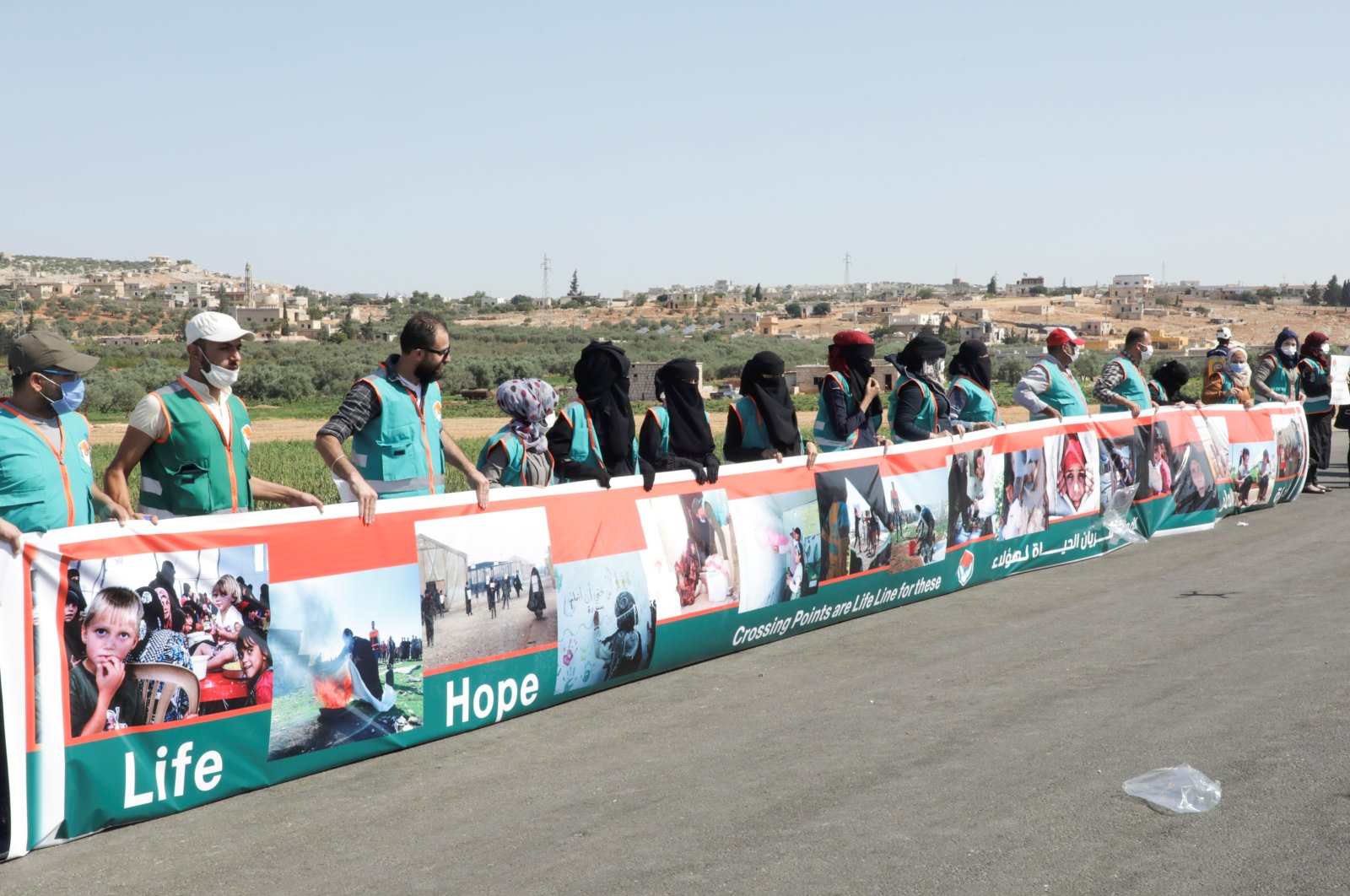 Health care workers hold signs near Bab al-Hawa crossing during a sit-in against its closure, at the Syrian-Turkish border, in Idlib governorate, Syria, July 2, 2021. (Photo by REUTERS/Mahmoud Hassano)
by Daily Sabah with AFP Jul 08, 2021 10:38 am
Edited By Eralp Yarar
RECOMMENDED

"The idea is Friday now," one diplomatic source said on condition of anonymity, with another source saying postponing would allow for "more time to finish the negotiation."

The vote originally set for Thursday is on a draft resolution to keep open the only remaining entry point for aid into northwest Syria that bypasses Damascus.

The U.N. cross-border aid authorization, in place since 2014 and sharply curtailed last year under pressure from Moscow, expires Saturday.

Russia, which holds veto power at the council and is a staunch ally of the Syrian regime, may block the renewal, preferring to see aid delivered across front lines from Damascus and arguing the existing crossing is used to supply arms to opposition fighters.

During a meeting on the issue Tuesday, Moscow had "maintained its position, which has been clear for a long time," a Russian diplomat told Agence France-Presse (AFP).

The draft resolution was presented by non-permanent council members Norway and Ireland in late June and seeks to keep the Bab al-Hawa crossing from Turkey into Syria open for one year.

Until Wednesday, the resolution also included a request to reopen for one year a second crossing point, Al Yarubiyah, which allows supplies to reach Syria's northeast from Iraq.

In a gesture toward Russia, Ireland and Norway abandoned that second request late Wednesday, according to diplomats. The two countries hope that Moscow will be more conciliatory with the proposed new draft, allowing a vote on Friday.

China, which last year vetoed a resolution on border crossings into Syria, stated Tuesday that it supports extending humanitarian aid deliveries to the war-torn country and wants to tackle the impact of Western sanctions.

Also, France warned Russia that if humanitarian aid deliveries are only allowed across conflict lines within Syria, Western nations will stop the funding, as Moscow is expected to block the reauthorization of U.N.-mandated cross-border aid operations into northwestern Syria.

In early July 2020, China and Russia vetoed a U.N. resolution that would have maintained two border crossing points from Turkey to deliver humanitarian aid to Syria’s northwest. Days later, under pressure from both countries, the council authorized the delivery of aid through just one of those crossings, Bab al-Hawa. The one-year mandate for using that crossing expires Saturday.

U.S. Ambassador Linda Thomas-Greenfield warned after Tuesday’s council meeting that Bab al-Hawa “is a lifeline to millions of people” in northwestern Syria’s Idlib region and if the crossing is closed, “I think the repercussions are obvious: people will starve to death.”

Echoing U.N. Secretary-General Antonio Guterres, many Western diplomats and humanitarian groups working in Syria, Thomas-Greenfield said there is no substitute for delivering U.N. aid across borders from other countries rather than moving aid across conflict lines within Syria.

Nongovernmental organizations (NGOs) have warned that rerouting such supplies through regime-held territory could lead to disaster. There is currently no agreement between the U.N. and Damascus to authorize U.N. aid deliveries to the northwest from inside Syria.

Some 3 million people live in opposition-dominated northwest Syria, more than half displaced by the country's decadelong conflict.