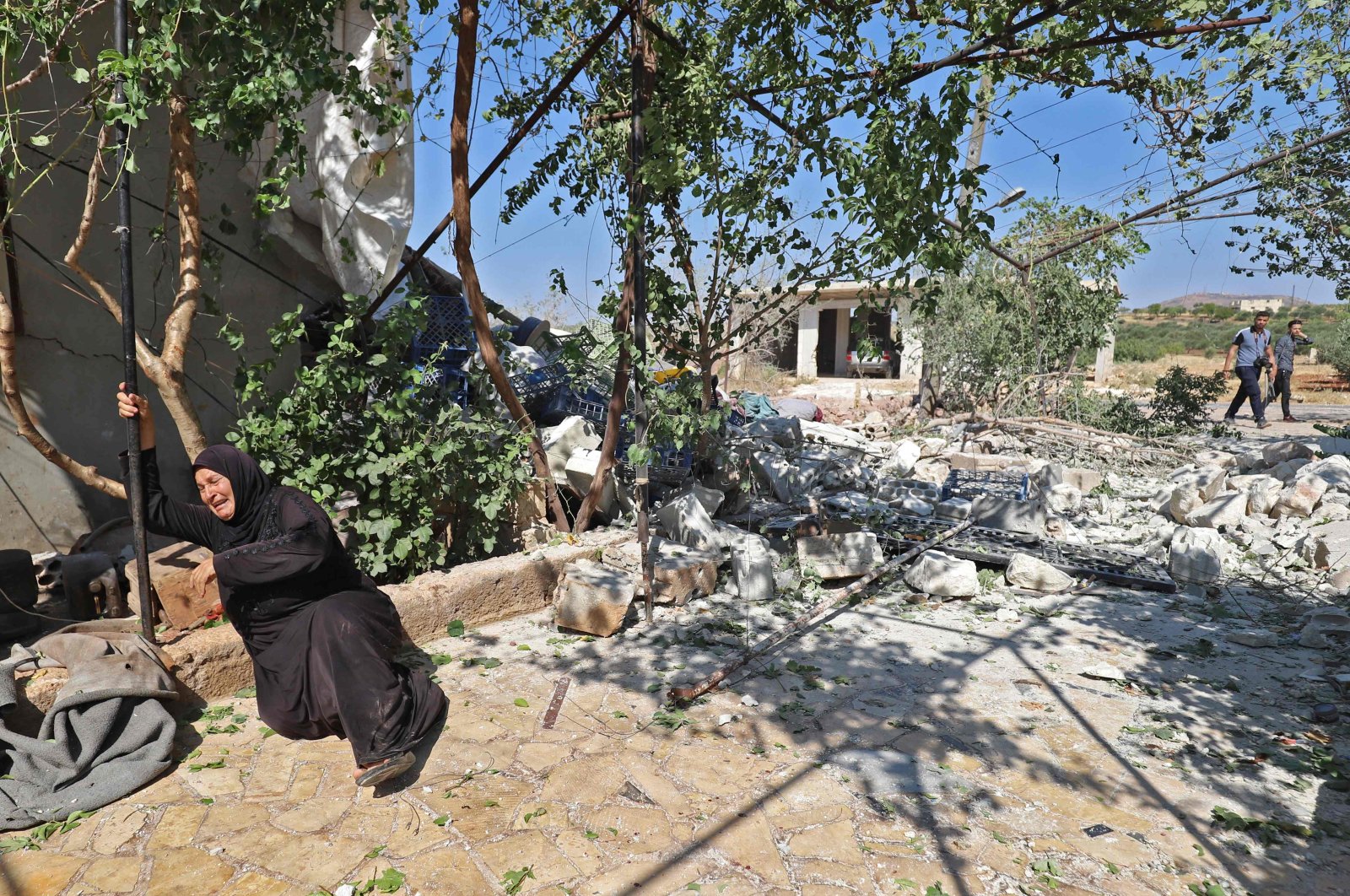 A Syrian woman reacts near the ruins of a house, destroyed in a reported regime artillery shelling, in the village of Iblin in the Jabal al-Zawiya region of Syria's opposition-held northwestern Idlib province, July 22, 2021. (AFP Photo)
by ASSOCIATED PRESS Jul 29, 2021 10:28 am
RECOMMENDED

The sanctions announced by the U.S. Treasury are part of Washington’s policy to keep up pressure on the Syrian regime led by longtime dictator Bashar Assad.

But signaling a new approach, the administration also targeted two armed groups, widening the net of those impacted by the sanctions. One of the groups was implicated in violating a cease-fire in place since 2020.

“The United States is taking action to promote accountability for entities and individuals that have perpetuated the suffering of the Syrian people,” said U.S. Secretary of State Anthony Blinken.

“Today’s action makes clear that the United States will not forget the victims of human rights abuses in Syria and will use appropriate tools to target and single out those responsible, regardless of the perpetrator.”

The Treasury Department said the prisons "have been sites of human rights abuses against political prisoners and other detainees."

"The Assad regime has waged a ruthless war against the Syrian people, imprisoning hundreds of thousands of Syrians calling for reform and change, of whom at least 14,000 have been tortured to death," the department said in a statement.

"More than 130,000 people reportedly remain missing or arbitrarily detained to this day – the vast majority of whom are either presumed dead or are detained without communication with family or legal representation," it added.

The sanctions target eight Syrian prisons, most of them linked to the powerful general and military intelligence agencies, and the generals who administer them. They include one of Syria’s most notorious, the Saydnaya military prison, located in the town of the same name north of the capital, Damascus.

The sanctions follow U.S. enactment last summer of legislation called the Caesar Syria Civilian Protection Act. The act is named after a Syrian military photographer who leaked thousands of photographs of thousands of victims of torture in prisons run by the Assad regime.

The U.S. Treasury said many of the prisons designated Wednesday were specifically highlighted in images provided by Caesar. It is not clear how a Syrian prison may be impacted by U.S. sanctions.

In a groundbreaking report in 2017, Amnesty International said Syrian authorities killed at least 13,000 people in the first five years of the country’s civil war in mass hangings at Saydnaya. The rights group referred to the killings as a “calculated campaign of extrajudicial execution.”

Rights groups estimate that 130,000 Syrians are still missing or detained. The U.S. and many European governments accuse Assad’s regime of most of the war’s atrocities.

The previous administration had focused most of its sanctions in Syria on businesses, financial institutions and associates of Assad and his family.

Among those sanctioned by the U.S. Treasury is an opposition armed group, Ahrar al-Sharqiya, whose fighters are mostly from eastern Syria. Two of the group's leaders were also sanctioned.

The group has been incriminated in the killing of a Syrian Kurdish politician, Hevrin Khalaf, in 2019. It is believed to have incorporated many Daesh terrorist group militants into its ranks.

The U.S. Treasury said Ahrar al-Sharqiya has committed numerous crimes against civilians. They include unlawful killings, abductions, torture and seizures of private property, compounding the suffering of a population that has repeatedly endured mass displacement.

The other armed group is affiliated with the Syrian military, Saraya al-Areen. The group has been fighting alongside regime troops in northwestern Idlib province, where the last opposition enclave is located.

The U.S. Treasury said the group was targeted for violating and obstructing a cease-fire in place since 2020.

Syria’s regime has criticized the U.S. sanctions, blaming them for a worsening economic crisis and calling them “crimes against humanity.”

In power since 2000, Assad began a fourth term in office earlier this month with the country still devastated by the 10-year war and sliding deeper into a worsening economic crisis.