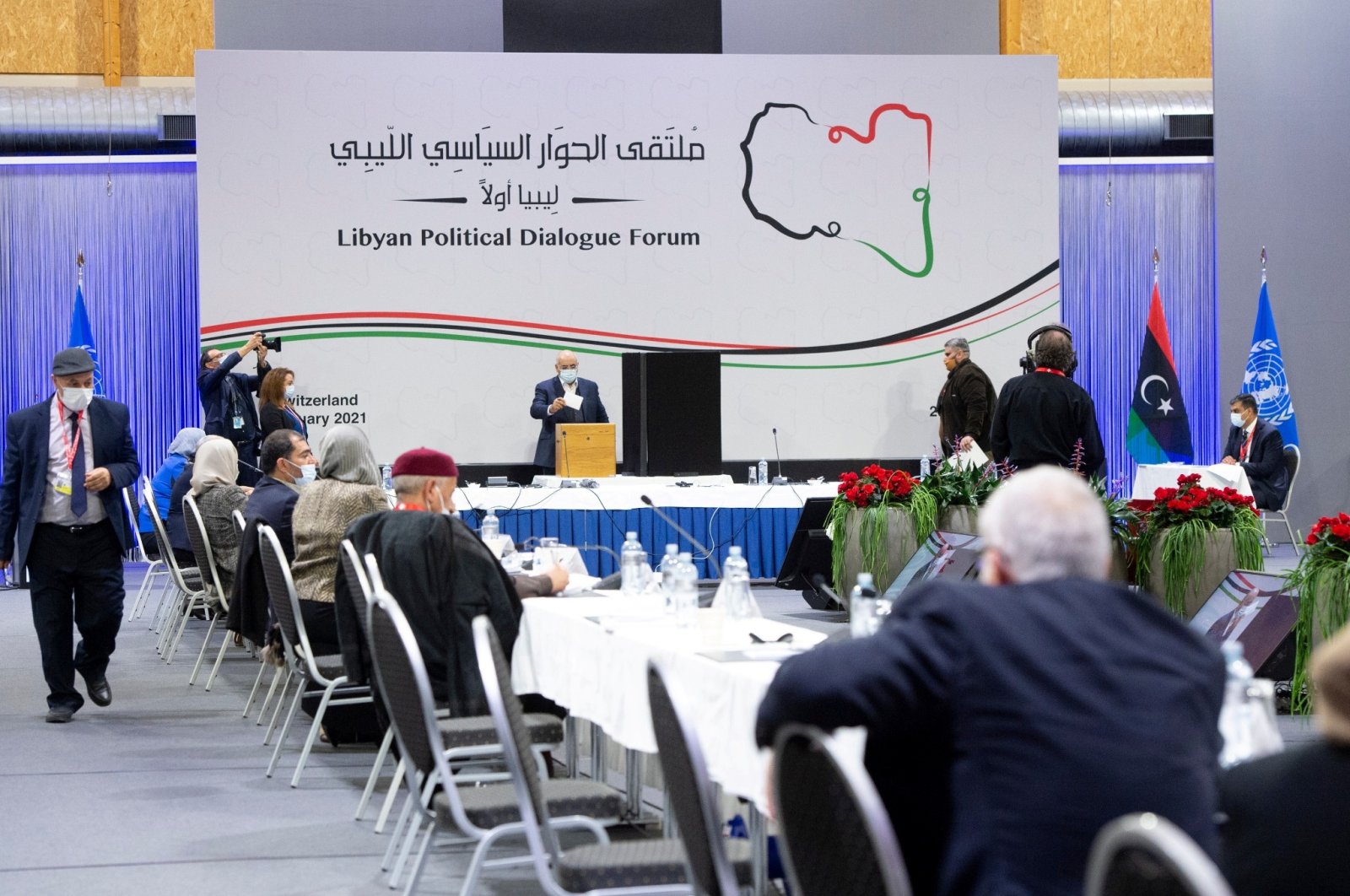 Delegates cast their vote for the election of a new interim government for Libya during the Libyan Political Dialogue Forum in Chavannes-de-Bogis near Geneva, Switzerland, Feb. 5, 2021. (Reuters Photo)
by Agencies Feb 07, 2021 11:28 am
RECOMMENDED

"Today's agreement on a new interim executive authority for all of Libya is another milestone towards peace,” German Foreign Minister Heiko Maas said on Twitter. "All Libyan factions and actors outside Libya must now support preparation of elections and implementation of ceasefire and not stand in its way.” Maas added that Germany will continue to fully support U.N.-led efforts for sustainable stabilization and lasting peace in Libya.

The Italian Foreign Ministry also congratulated the Libyan people. Considering that elections are scheduled for Dec. 24, 2021, the determination of the unitary and inclusive interim executive authority is an important step in strengthening Libya's stability and institutional structure, it said in a statement.

A new political phase begins, which is decisive for the establishment of the Presidential Council and for the full implementation of the cease-fire agreement of Oct. 23, 2020, and the withdrawal of all foreign fighters and mercenaries, in the perspective of the Government of National Accord (GNA), which we hope to be fully comprehensive, it added.

"Malta notes the outcome of the election for the transitional government of Libya. Best wishes for a united Libya run by Libyans for the common good of Libyans in a peaceful and prosperous Libya," Maltese Foreign Minister Evarist Bartolo said on Twitter. "We look forward to working with you for the mutual benefit of #Libya & #Malta," he added.

U.K.'s Foreign, Commonwealth and Development Office said the governments of France, Germany, Italy, the U.K. and the U.S. also hailed the agreement.

"This critical step towards reaching a negotiated, inclusive political solution is the result of a genuinely Libyan-led and Libyan-owned process, the mediation of the United Nations, and the support of the Libyan people," it said, according to remarks carried by Anadolu Agency (AA).

The statement encouraged Libyan authorities and actors "to ensure a smooth and constructive handover of all competencies and duties" to the new unified executive authority, adding that "a long road still lies ahead." It emphasized that the unified executive authority will have to implement the cease-fire agreement, provide essential public services to Libyans, initiate a program for meaningful reconciliation, address critical national budget needs and organize national elections.

"We call on the delegates of the Libyan Political Dialogue Forum to maintain their important function, guaranteeing the focus of the new unified executive authority on preparing and holding elections as decided by the Forum," it added.

Recalling that the international community committed to supporting a resolution to the North African nation's conflict at the Berlin conference on Libya last year, the statement underlined that all participants of the conference should now support the executive authority in fulfilling its duties to the Libyan people, fully implement the arms embargo and support the immediate withdrawal of all foreign fighters and mercenaries.

"We stand ready to hold to account those who threaten stability or undermine the political process in Libya," it said.

Egyptian President Abdel Fattah el-Sissi has also given his support to a transitional government that would lead neighboring Libya through elections late this year. In rare televised comments late Saturday, el-Sissi said the appointment of the interim government, which includes a three-member Presidential Council and a prime minister, was "a step in the right direction,” as The Associated Press (AP) reported.

The Libyan Political Dialogue Forum, which includes 75 U.N.-picked delegates from across the country, appointed Mohammad Al-Menfi, a Libyan diplomat from the country’s east, as chairman of the Presidential Council. The forum also chose Abdul Hamid Mohammed Dbeibah, a powerful businessperson from the western city of Misrata, as prime minister. The three council members each represent a region of old Libya: Tripolitania in the west, Cyrenaica in the east and Fezzan in the southwest.

"We are supportive of them ... We are ready to cooperate with them for Libya’s recovery and to prepare for the elections in Libya,” el-Sissi said. The Egyptian leader said his threat last year to send troops to Libya helped "start a genuine period for peace” in the oil-rich country.

"We are keen that each move ... aims to build peace, prosperity and maintain stability in a region that has been suffered in the past 20 years a very great shock,” he said. Egypt views the instability in neighboring Libya as a national security threat.

Libya descended into chaos following the 2011 uprising that ousted and killed longtime dictator Moammar Gadhafi. The country has been divided since 2015 between two governments, one in the east and one in the west, with each backed by foreign governments.

Based in the capital Tripoli and currently led by Prime Minister Fayez Sarraj, the GNA was founded in 2015 under a U.N.-led agreement. But efforts for a long-term political settlement have failed due to a military offensive by putschist Gen. Khalifa Haftar's militias. Al-Sarraj's internationally recognized government has been battling Haftar's militias since April 2019 in a conflict that has claimed thousands of lives.

Egypt and the United Arab Emirates (UAE) back Haftar's forces. The Tripoli government primarily has backing from Turkey, whose military support helped cause the collapse this spring of Haftar's yearlong attempt to capture Tripoli. The appointment of an interim government has been seen as a major step toward unifying the North African nation.