'Love it': Guy Ritchie wants to film all future movies in Turkey 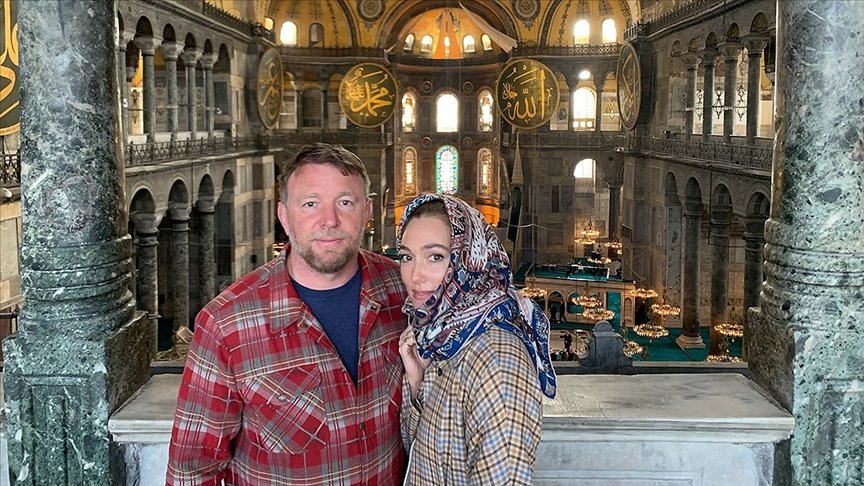 Renowned British director and screenwriter Guy Ritchie, who has been shooting his latest movie "Five Eyes" in Turkey's Antalya province on the Mediterranean coast recently, has said he would like to shoot all of his films in Turkey after having spent two months filming in the country in a Twitter video post.

Noting his interest in ancient civilizations and historical sites, Ritchie said that Turkey is quite modern but also has the charm of the old times. Calling Antalya's Aspendos ancient city magnificent, the director called the region where filming continues his "2000-year-old office."

Ritchie also shared a photo with his wife Jacqui Ainsley in the Hagia Sophia Grand Mosque in Istanbul along with another photo of Ainsley and his children in Turkey, expressing his thanks in Turkish to Regnum Carya resort "for looking after them so magnificently" in Antalya. The posts of the director were liked by the thousands.

Teşekkür ederim to everyone at the @regnumcarya in Antalya for looking after us so magnificently pic.twitter.com/bPw2fJX1f1

Ritchie's deep love of Turkey echoed the recent sentiments of Hollywood action star Jason Statham who was in the country with the auteur director for a leading role in “Five Eyes”.

The box office darling had sung Turkey's praises after working for two months in the Turkish Riviera with Ritchie. Statham, said that he was very impressed by Turkish culture and hospitality and that he wanted to come back to sunny Antalya with his family.

While in Turkey, the duo also attended the opening ceremony of the Istanbul Cinema Museum in February, which welcomed art lovers at the Atlas Theatre building on the touristic Istiklal Street following two-years of restoration work.

Statham and Ritchie, along with actor Josh Harnett and Ainsley, surprised President Recep Tayyip Erdoğan, who was also in attendance, when they wished the president a happy 67th birthday.