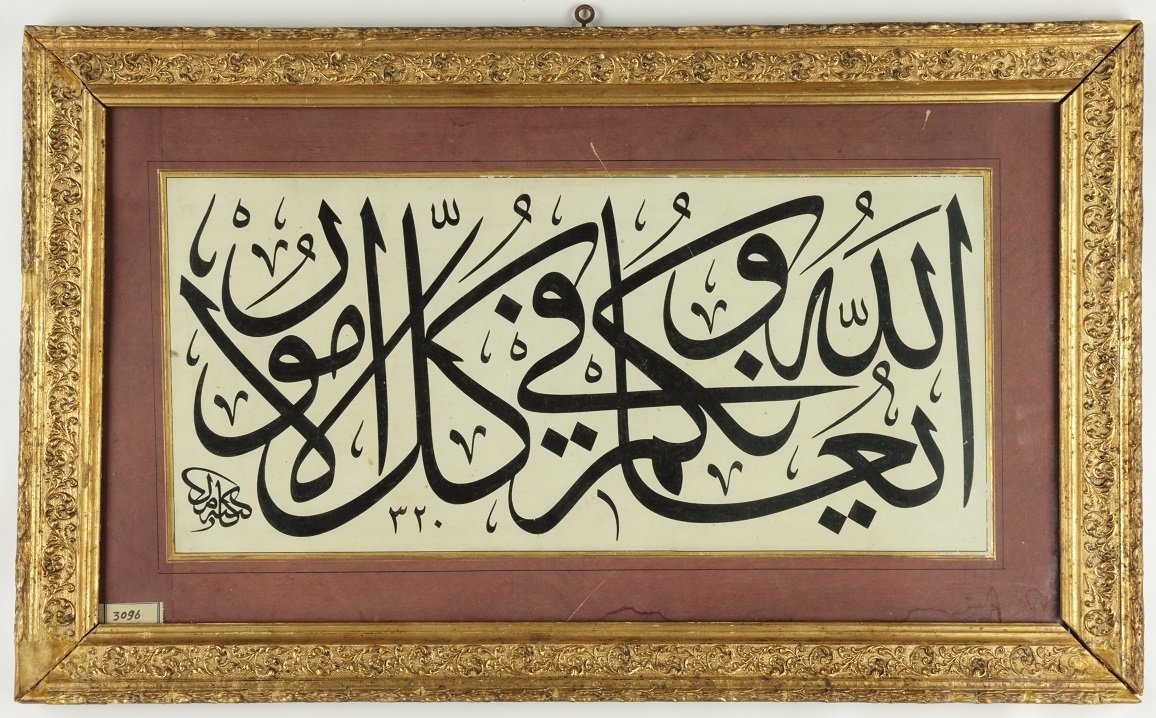 A calligraphy plate from the displays of the “Faith and Art” exhibition in the Museum of Turkish and Islamic Arts, Istanbul, Turkey. (Courtesy of Ministry of Culture and Tourism)
by DAILY SABAH Apr 15, 2021 4:07 pm
RECOMMENDED

The Museum of Turkish and Islamic Arts at Istanbul’s Sultanahmet Square is holding a new exhibition, featuring 150 works from its collection.

The “Faith and Art” exhibition, which has divided exhibits into five different sections “Quran,” “Prophet Muhammad,” “Worship,” “Prayer,” and “Civilizations,” will welcome visitors in the temporary exhibition hall of the museum between April 16 and July 30.

Among the displays of the exhibition are eight and ninth-century Qurans written by famous calligrapher Yaqut al-Musta'simi in Kufic script on parchment, and the sanduka – a type of cenotaph placed over the original graves of distinguished people in Turkish-Islamic tradition – of Seyyid Ali, son of the great Sufi mystic Mevlana Jalaluddin Rumi, and of Seydi Mahmut Hayrani.

Four wooden coffins from the Tomb of Seydi Mahmut Hayrani in the Akşehir district of central Turkey's Konya were stolen in the 1970s, and following the theft, the coffin of Seyyid Ali was put on display in the David Samling Museum in Copenhagen, Denmark. The sanduka of this coffin, which is a high-quality example of the 13th century Seljuk Sultanate of Rum, will now be exhibited at the Museum of Turkish and Islamic Arts.

The exhibition will also feature a Quran dated 1440 written on Chinese paper, a Quran written by Sheikh Hamdullah – the founder of the Ottoman school of calligraphy, a calligraphy plate of Abdülmecid II – the last Caliph of Islam, Hilye-i Şerif, which are writings on Prophet Muhammad's appearance and characteristics by Kazasker (chief judge) Mustafa Izzet Efendi – one of the greatest calligraphers of the Ottoman Empire, and a copy of Hagia Sophia Grand Mosque’s foundation deed of trust referred to as a “vakıfiye.”

The 73 works exhibited in the “Faith and Art” exhibition will be showcased for the first time, while the other works will consist of works that were previously exhibited for a short time. The exhibition can be visited free of charge.