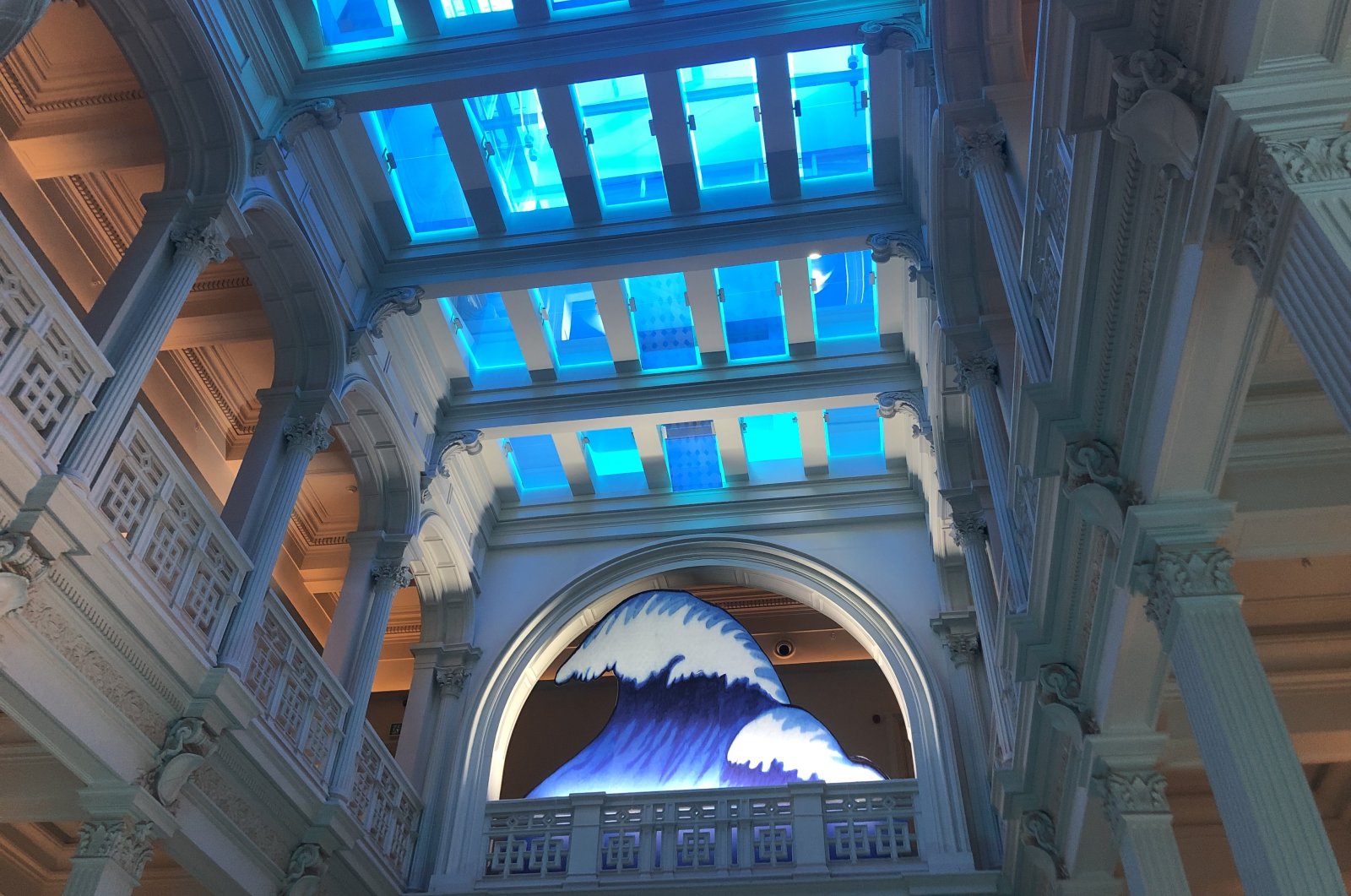 As part of their 10th-anniversary series, “The Sequential,” SALT has engaged with artists from Turkey who are of a generation defined by their upbringing in the 1990s. In simple terms, they are old millennials whose taste for internet culture and the lingering whiffs of pop nostalgia run deep in their veins, allowing them access to the more corporatized engines of social media, while with a certain poignant grasp of a past that now seems like the rustic countryside – a time when the early web instilled the fantasies of remoteness and obscurity and a cybersurfer could even find a sense of solitude online.

But now, that has all changed. And the perfect happiness of being comfortably alone is increasingly infiltrated by data miners out for the next blip that might more closely quantify the subliminal consciousness of decision-making. And what is there to do, when, day after day, and night after night, the television light glares, the music blares, and every wall and surface is open to a black hole of stares. That is the tone of a work by Volkan Aslan, which is quite brave in its personal exposure, offering the public a six-minute window into a life, led with a kind of interminable impatience, behind closed doors.

In that way, the pandemic can be said to owe its metaphorical atmosphere to Samuel Beckett's classic modernist play “Waiting for Godot,” which the Irish dramatist conceived as an existential vision of secular messianism. In fact, “Stay Safe” (2021) by Aslan is based on another literary reference, one closer to home on the shores of Istanbul. Its themes are said to adapt the short story, “The Stelyanos Hrisopulos” by the legendary island hermit of a writer, Sait Faik Abasıyanık, who, in 1936, published his evergreen piece. The plot centers around an orphaned child who builds a life-sized toy ship, and even if a group of jealous children capsizes it in the style of William Golding’s “Lord of the Flies,” his unflagging spirit is untamed.

Another contemporary Turkish artist of Italian heritage, Antonio Cosentino has previously gleaned inspiration from that same story for his works, and even built a likeness of the fictional ship and performed its exhibition through the streets of Istanbul. Aslan is more conceptual in his approach to representing the significance of the ship, which might reflect a universal encapsulation of what it means to endure the swarms of envy and disaster just for being different, even when every individual is different. And nowhere is that clearer than when alone.

To sink or swim

The basement curation of “Stay Safe” is appropriate, as the unlit, confining depths of the old bank coalesce with the themes represented in the piece, of loneliness, solitude and the psychological immersion that ensues in its wake. The motif of cleanliness recurs throughout SALT Galata in the short-loop video series, “I am troubled like the people who cannot weep for the dead” (2018-2021).

Flat monitors projecting the work are placed neatly around the building, above its entranceway, largely unnoticed, or leaning against walls along the marble stairwells. To clean the petals of a flower the video projects is reminiscent of the Shakespearian adage, “to paint the lily.”

The rush of clear water as it gleams and falls over the colorful bursts of blossoms expands on the idea of aesthetic excess, and the overriding obsessions with surface cleaning, both of bodies and of the superficies over which most people live, unaware of scientific realities, and in particular the physiological phenomena, that have shaken the modern world to its core. Toward the top floor ceiling of SALT Galata, Aslan installed a seamlessly interwoven sculpture and intervention into the intricate, neoclassical architectural interior. They are, respectively, “Scenery” (2021) and “Water” (2021).

The cool blue light that emanates through the glass-paneled roof is courtesy of the artist’s chosen tint, which saturates the air with a cool, blue filter. The atmospheric effect is ameliorative, cleansing, and the cardboard mock-up wave, evocative of “The Great Wave off Kanagawa” by Japanese ukiyo-e artist Hokusai. And within an adjacent hall, a two-channel video work, “Best Wishes” (2019) screens with its impeccable cinematography. The piece tells the story of someone who sits at home rewriting a letter, for months, to nobody. Unlike the accompanying work, “Stay Safe,” “Best Wishes” takes place mostly outside, on the streets.

“Best Wishes” essentially embarks from where “Stay Safe” ended, as its solitary subject concluded what appeared to be their weekend lockdown by strapping on their mask and exiting their apartment. “Best Wishes” is a prequel, in terms of the chronology of its making, but appears more like the latter work’s sequel, as its mood of philosophical rumination is akin, and included the same collaborative teams, notably led by Nora Tataryan for the texts of the voiceover narrations, and Emre Başaran as director of photography. In both videos, there is a repeated act of handwashing, turning keys, typing, such mundane but all-defining behaviors.

There are a few uncanny bridges between the videos, “Best Wishes” and “Stay Safe,” the first of which could be said to be in the connotations of their titles. They are equally named with a kind of satirical bent. The rote signing off of emails, for instance, with “best wishes,” directly translated into Turkish as well, brings to mind the humdrum office hours of freelance and cultural workers whose communication styles might sometimes feel as weighed by the monotonous rhythms of empty bureaucracy as the weariest of Orwellian ministries. Likewise, “Stay Safe,” being the catch-all phrase for pandemic survival, carries an unspoken heaviness.

In their narration text for “Stay Safe,” Tataryan and Aslan wrote: “What I actually find hard is that we are abandoned to our fate. For we’ve been robbed of the right to feel worried as well. I’m not nervous but angry.” The character, a man ostensibly living alone, showers before making a salad. He thinks about the letter they had written earlier, addressing, as it were, nobody in particular, in continuity with “Best Wishes,” in which the nuanced, writerly text of Tataryan and Aslan narrates: “I wanted to tell you about my state of mind, as well as I can. Recently, a lot has changed but it’s also as if nothing has changed.”