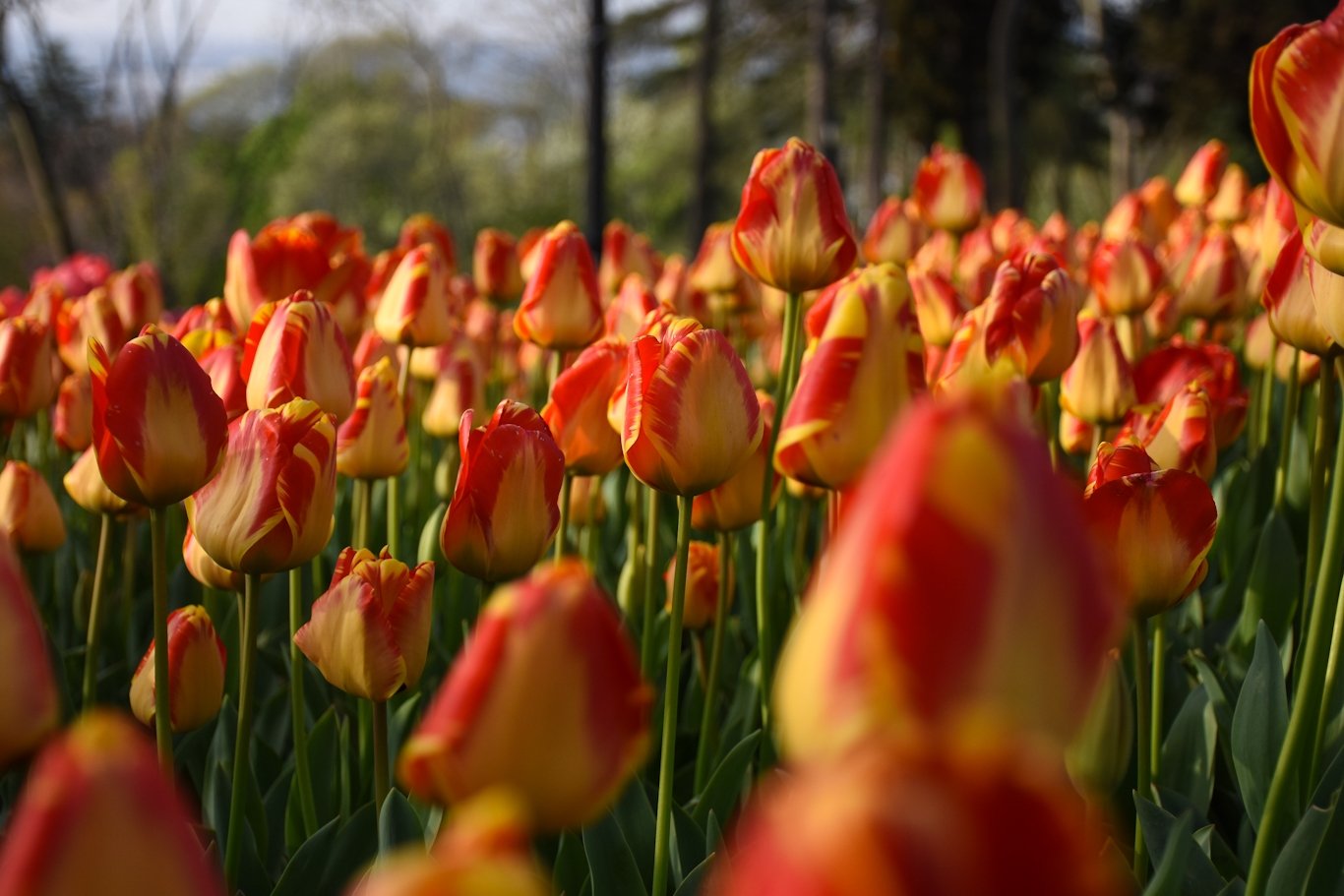 Floral festivities for tulips are held in Kashmir and Turkey with great enthusiasm. While Turks attribute significance to this flower, which is native to their lands, the Tulip Festival is important for Kashmiris as a chance to celebrate their traditional and cultural values

The blooming of tulips, known for their beauty and grace, marks the arrival of spring every year. These flowers have a special place in the hearts of Turks and Kashmiris. While they are associated with splendor and adoration in Kashmir, there is even a period called the “Tulip Era” in Turkish history.

With all its charm and grandeur, the tulip has inevitably become an essential part of Turkish and Kashmiri cultures. For example, tulip motifs are commonly used by Turkish artists to decorate many diverse items from carpets to clothes and calligraphy works to illuminated manuscripts. Besides, both Turkey and Kashmir host annual tulip festivals.

Known for its serene beauty or simply as “paradise on earth,” one feels compelled to visit and stay in Kashmir. Its beautiful landscapes, freshwater lakes and pristine mountains stand guard over the valley.

Among this natural beauty, Kashmir features Asia’s largest tulip garden spread over 74 acres (299,467 square meters) of land. The Indira Gandhi Memorial Tulip Garden was opened in 2007 and since then, Kashmir has been hosting a tulip festival annually. The festival is celebrated with much enthusiasm in the foothills of the Zabarwan hills almost next to the famous Dal lake every year.

The tulip bulbs of Kashmir were imported from the Netherlands. Though, wild tulips were found locally in different areas of Kashmir and in Asian steppes. The Indira Gandhi Memorial Tulip Garden has around 64 varieties of tulips. Apart from tulips, a total of 43 varieties of other flowers, including hyacinth, ranunculus and daffodils, have been planted in the garden as well.

The start of spring with large tulip blooms coincided with the deadly COVID-19 pandemic this year. Nevertheless, a six-day tulip festival was hosted between April 3 and 9 with complete fervor in Kashmir accompanied by enthralling musical concerts and cultural performances. Local Kashmiri handicrafts were also on display at the event and the customary local cuisines were also served for visitors. The main motive behind the Tulip Festival is not just to attract local and foreign visitors but to familiarize them with the rich traditional and cultural values and to showcase the rich traditional attire of Kashmiris.

Turkey has also been organizing the Tulip Festival in Istanbul since 2015 throughout the month of April. Millions of tulips were planted across the city in Istanbul that year under the project “Tulips Come Back Home,” which later paved way for the tulip festival held annually. Launched with the motto of "Istanbul meets its tulips," the festival holds a special place in Turkish culture as it rejuvenates the cultural life of the metropolis. However, the event also carries a historical importance as this flower is actually native to Anatolia and considered a national symbol.

During the festival, tulips blossom in various areas in Istanbul. Moreover, a tulip carpet, which is the first in the world, is rolled out in the famous Sultanahmet Square with the magnificent view of the famous Blue Mosque and Hagia Sophia in its background. While Turkish bands offer a fun time to visitors, marbling artists also perform and showcase artwork, especially those featuring tulip motifs, during the festival. Even a women’s tennis tournament called Tulip Cup was previously held in the city. However, this year’s edition was rather unspirited due to the virus.

Istanbul also houses the world’s biggest Tulip Museum, which was opened in 2015 to spread the cultural value of this flower and introduce it to future generations. Located in Emirgan Grove, the museum aims to highlight the place of the flower in Turkish culture. While visitors can both see tools like a plow used to plant tulips and a sieve to clean out tulips in the museum, they can also see handicrafts, such as a sultan kaftan or handkerchief decorated with tulip motifs.

Tulips were brought from Turkish lands to Europe during the Ottoman Empire. Although the Netherlands is the first country that comes to mind when we think of tulips and their exports, in fact, Dutch vendors were initially introduced to the flower through the Ottoman Empire in the 17th century. Thereafter, tulips made their way to Europe and the United States and became a part of their cultures as well. Countries such as Canada, the U.S., New Zealand, Australia, the U.K. and elsewhere also host marvelous tulip festivals. On the other hand, tulips are widely considered the harbinger of spring with vibrant hues ushering in nature's message of love everywhere from Turkey to Kashmir, which also triggers tulip-related events across the world.