Weekend at Cannes: Spotlight falls on unique labors of love 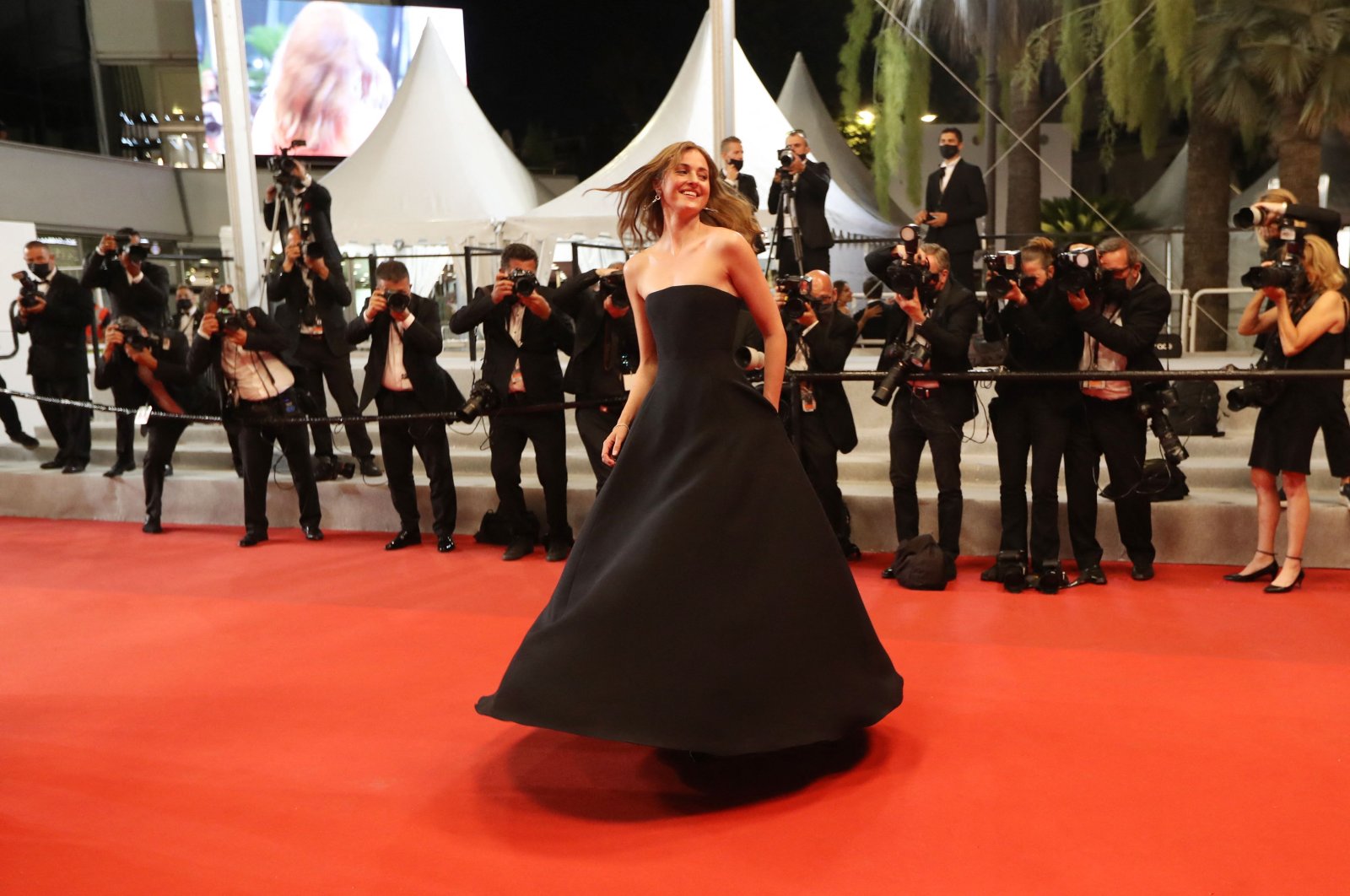 Norwegian actress Renate Reinsve dances as she arrives for the screening of the film “Verdens Verste Menneske” (The Worst Person In The World) at the 74th Cannes Film Festival in Cannes, France, July 8, 2021. (AFP Photo)
by French Press Agency - AFP Jul 12, 2021 11:32 am
RECOMMENDED

It was quite a weekend at the Cannes Film Festival as the industry celebrated the return of the most prestigious cinema event of the year after its hiatus last festival season due to COVID-19. Some featuring unknown faces, some starring Cannes regulars, numerous films premiered and stole the hearts of audiences and critics alike.

So, here's a recap of some of the highlights from the weekend as we edge closer to the famed, coveted Palme d'Or grand prize.

In the footsteps of his barred father

You might think the family business did not seem so inviting to young Iranian filmmaker Panah Panahi, given that his acclaimed father has faced years of persecution at the hands of the authorities.

But the 37-year-old made a splash at the Cannes Film Festival this weekend, presenting his first film "Hit the Road" at an event that his father, Jafar Panahi, has been blocked from attending by Tehran for more than a decade.

The elder Panahi has won a slew of awards at international festivals, including the top prize in Berlin for "Taxi" in 2015 and best screenplay at Cannes for his last film "Three Faces" in 2018.

But since being convicted of "propaganda against the system" in 2010, following his support for anti-government protests and a string of films that critiqued modern Iran, he has been barred from leaving the country to pick up any of these awards.

None of this is what most concerned his son, however, as he toyed with becoming a director himself.

"These things were a minor issue for me," he told Agence France-Presse (AFP) on the beach at Cannes. "My main problem throughout my life was how I could have a separate identity from my father.

"I was instinctively drawn to cinema with a passion... but this comparison was always there," he said.

Eventually he "decided to only think of myself and what I want to achieve, and not occupy myself with the problems of my father or these comparisons. Otherwise, I'd never have been able to make films."

The comparisons are hard to avoid, however.

"Hit the Road" is playing in the Director's Fortnight at Cannes, the same section in which his father presented his classic "The White Balloon" in 1995, taking home Cannes' Prix de la Camera d'Or for best first film.

The younger Panahi's effort is also a low-key triumph, a touching and amusing look at a family driving their son from Tehran to the border so he can leave the country.

"I have close friends who have left Iran, so this is a real issue for me. All of my friends have reached a point of finding the situation intolerable," Panahi told AFP.

"I went with this idea that the boy had reached a total dead-end. This dead-end was a real one that I had witnessed for myself and those around me."

But Panahi said he didn't want the specific situation in Iran to be his focus, and indeed the film is more about the bittersweet interactions between the family, including a hilariously high-spirited younger brother.

"I wanted to avoid being too specific, so that if people from other countries watch the film, and their son or brother is dealing with similar problems, they can connect with him," the director said.

Cannes falls for 'The Worst Person in the World'

The Cannes Film Festival has fallen head over heels for a Norwegian film about a young woman trying to find herself and the unknown actress who plays her.

"A star is born," declared The Guardian's Peter Bradshaw.

Renate Reinsve "takes off like a rocket and deserves star status to rival Lily James or Alicia Vikander," he added, giving "The Worst Person in the World" a five-star review, one of several it has already garnered.

In her first big screen lead, Reinsve plays a 20-something trying and failing to define herself through her pinballing relationships with men until she finally strikes out on her own path.

Variety predicted it would become a "touchstone" movie for millennials, Britain's Daily Telegraph called it "wondrous," while Xan Brooks of The Observer said it was "simply gorgeous."

Bradshaw, one of several critics to admit wiping away a tear or two during the premiere, credited the director Joachim Trier with inventing a whole new genre.

"Trier has taken on one of the most difficult genres imaginable, the romantic drama, and combined it with another very tricky style, the coming-of-ager, to craft something gloriously sweet and beguiling," he said.

The French media were equally bewitched. And everyone wondered why the world has never heard of 33-year-old Reinsve before.

Trier told AFP that "there is an awful lot of her in the character. She has had a big, big impact on this film.

"I wrote it specifically for her," he said knowing her gift for improvisation. "I could cut four of five different versions of any scene with her in this film.

"I always wondered why the hell is Norwegian film so messed up that she hasn't had a lead role yet?" Trier added.

Reinsve told AFP that she had "been through the same" labyrinth of self-doubt and indecision as her character. And she too would often think of herself as the worst person in the world as she saw others around fly.

In the film her character Julie drifts from medical school to a psychology degree to photography to five minutes of Facebook fame for writing a piece around the subject of #MeToo.

"Growing up before #MeToo you kind of shape yourself with the strong opinions and presence of men," Reinsve added. "She finds her identity in others' eyes. When you free yourself from that, you become yourself and stronger," she said.

The film – which includes one of the most feminist sex scenes ever seen at Cannes, has also been praised for the way it deals with the shifting gender power balance. In one particularly telling scene, Reinsve's older graphic novelist boyfriend crashes and burns when a radio interview turns to the lumpen sexism of his past creations.

Trier said the film was navigating "the beautiful chaos" and complications of love in a time of massive change.

"With #MeToo it is very polarised. But I believe that change also comes about through humanity and understanding," he said. "Is there such a thing as pure love? I'm not sure, they are millions of agendas, conscious and unconscious.”

"I want to give a big hug to people with this the film and say hey, 'It's OK. we are all going through this.'"

"The Worst Person in the World" is one of 24 films competing for Cannes top prize, the Palme d'Or, which will be awarded next Saturday.

Marathon to bring Anne Frank to the big screen

After making one of the most successful adult animated films of all time in "Waltz With Bashir," Israeli director Ari Folman vowed never to tackle the mind-bending complexity of such projects again.

But when he got the chance to bring the iconic story of Anne Frank to the big screen for children, he couldn't resist, even though it ended up taking over his life for eight years.

"Where is Anne Frank," which debuted at Cannes this week, is another beautifully drawn cartoon, and his first to be aimed at younger audiences.

Folman happily admits this is because his last attempt at an adult animation, "The Congress" starring Robin Wright and Harvey Keitel, was a massive flop.

Despite being praised by critics, that film was "a disaster in the box office," Folman told AFP in an interview at Cannes.

"I hassled so many people, raised $10 million, had hundreds of animators, and then no one saw the movie!

"I thought: no more animation for adults. If you want to deal with these incredibly tough productions, it should be for a wide audience, which means a family movie," he said.

It helps that "The Diary of Anne Frank" remains one of the most beloved and important books of the last century.

Folman's film follows Kitty, Anne's imaginary friend from the diary, jumping between the present day and the real-life story of Anne and her family hiding from the Nazis in occupied Amsterdam.

"(Anne) became part of my life in a way that I can't even explain," said Folman. "My youngest daughter was here at the screening, she's 14. She told me she can't remember life without Anne Frank. She was six when I started."

The film seeks to move beyond the iconic image of Anne, Folman said.

"She's an icon but more than that, she was a teenager, isolated, going through adolescence, funny, wicked as hell, a great observer of the adults, seeing everyone's faults, attacking them. She was great fun. I thought we should see all aspects of her character," said Folman.

The film seems destined for a wide audience, though Folman says he would need some serious brainpower to take on another animated project.

"For the next film, I'm looking for a mathematician, or a chess player, I'm not joking, to do the calculations," he said.

That's because there are so many moving parts to consider with an animated film.

"Where is Anne Frank," for instance, had 1,100 shots, each having to go through 11 different stages, shared between 12 studios in different countries.

"Each delay impacts every part of the chain," said Folman, half-laughing, half-despairing. "If you miss something, you are half-a-million dollars short. No one can calculate it."

"My dream is an alien machine which can see all 12,000 elements, each change happening in every studio, how long it takes and how we can fix it. I couldn't find one. Maybe Kasparov can do it!"