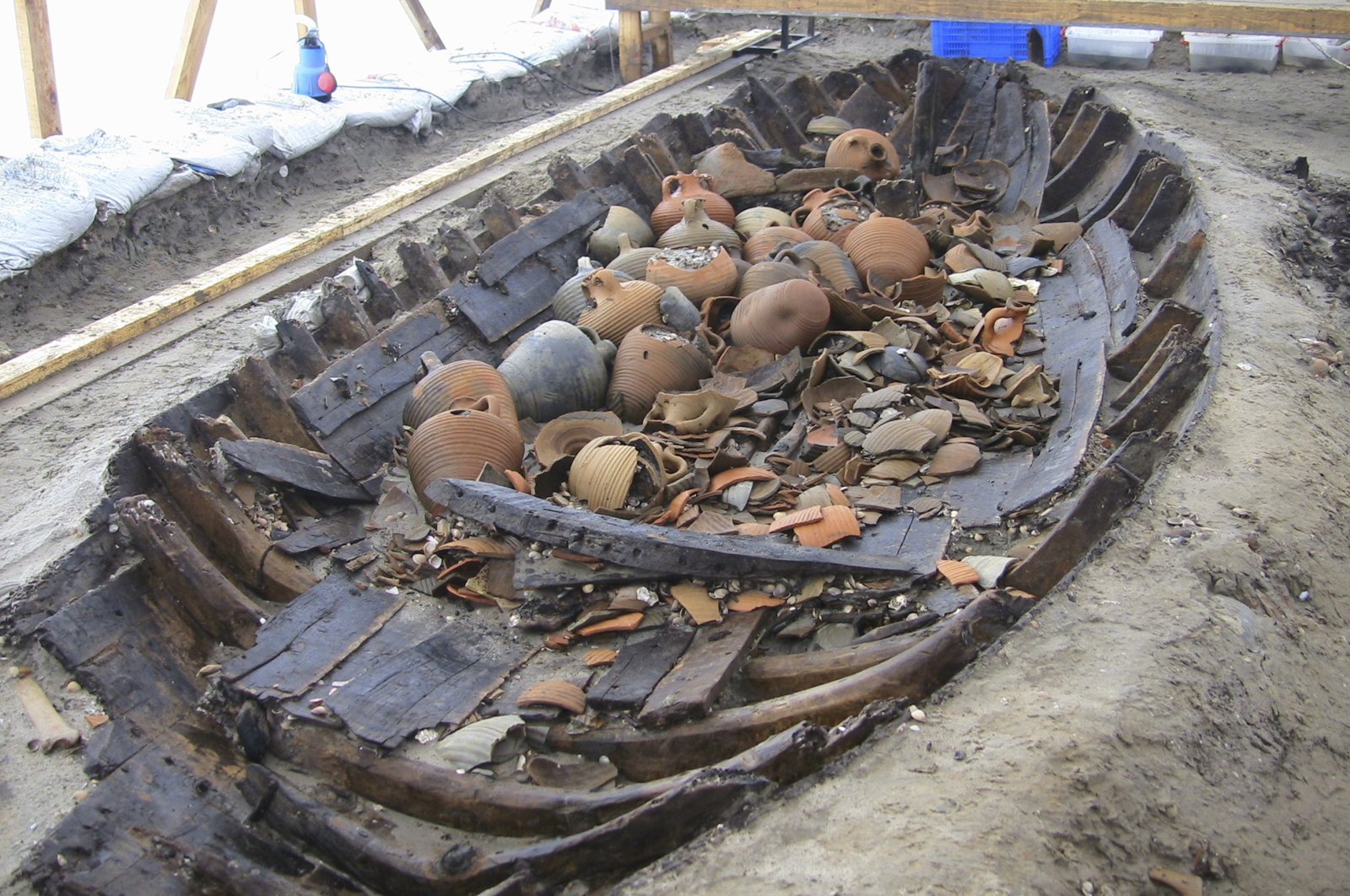 Remains of a ship and potteries found in Yenikapı, Istanbul, Turkey. (AA Photo)
by Anadolu Agency Oct 14, 2021 11:59 am
RECOMMENDED

The excavations prompted by the Marmaray project, the subsea railway tunnel connecting the Asian and European sides of Istanbul under the Bosporus, have stood out as a major step for documenting the area's long history. The digs have unearthed the 8,500-year-old history of Istanbul and have ensured that the legacy of past civilizations will be passed on to future generations.

The excavations started in 2004 as part of the Marmaray project. The research, which has revealed new historical aspects of Istanbul, concluded in 2013. The findings have thrilled the world of archeology since the pickaxe first struck.

Some 60,000 artifacts unearthed in the Yenikapı and Sirkeci quarters and Üsküdar district during excavations over a span of around nine years are being preserved in Istanbul Archeological Museum until a special museum is built for them.

The excavations have found the first traces of civilizations from different periods, including the skeletons of the first Istanbulites, 8,500-year-old footprints, the Harbor of Eleutherios (Theodosius), a port known in world literature but with no traces found so far, the world's largest medieval sunken ship collection, as well as 60,000 animal bones of 57 species and plant fossils.

The Harbor of Eleutherios, the largest transportation center of Constantinople – the capital of the Byzantine Empire – between the fourth and 11th centuries was unearthed during the excavations in Yenikapı. Constructed to transport wheat imported from Egypt, the remains that have survived from the port include 25 piers, two of which are stone and the rest wood.

The digging started 3 meters (10 feet) above sea level and continued 10 meters (33 feet) below it. A group of buildings dating to the Ottoman period, including a 20th-century cistern and numerous water wells, were also found in Yenikapı.

When the excavations were expanded in the area, approximately 37 sunken ships of various types and sizes that date back to the period from the fifth to 11th centuries were also discovered, the largest medieval sunken ship collection of the world.

While the shipwrecks provide important information about Byzantine ship typology, shipbuilding technology and the evolution of these technologies, the researchers think that the ships may have sunk in the harbor as a result of a natural disaster such as a strong storm or tsunami.

A church was also found in the metro section to the northwest of the Yenikapı excavation area, and it was determined that it was built between the 12th and 13th centuries when the harbor started to fill up. A total of 22 graves containing 24 human skeletons and thousands of animal skeletons were also unearthed around the church.

Archaeological excavations in the city's Üsküdar district, another important station of the Marmaray project, were carried out between 2004-2008.

Ruins dating back to the Archaic, Classical, Hellenistic, and Roman periods and architectural ruins from Byzantine and Ottoman periods were discovered in Üsküdar, known as Khrysopolis in the early ages and as Scutari in the Roman period.

During the excavations carried out near Mihrimah Sultan Mosque and Sultan Ahmet III Fountain, the foundation of an apsidal structure dating back to the 12th or 13th-century Byzantine period was found. As many as 97 skeletons, including three children, 14 women and 73 men, and seven others whose genders could not be identified, were among the discoveries of the digs in this structure.

Prosforion, one of city's oldest ports

Sirkeci, another excavation station of the Marmaray project, has been used as a port since the seventh century. Prosphorion Harbour was the first port to be built in Constantinople's area during the time when it was the city-state of Byzantium.

During the excavations in Sirkeci, architectural remains belonging to the late Ottoman, Byzantine and early Byzantine periods, as well as small finds and pottery belonging to the pre-Roman period were found. Iznik tiles from the 16th century and the head of a female Roman marble statue stand out among the findings.