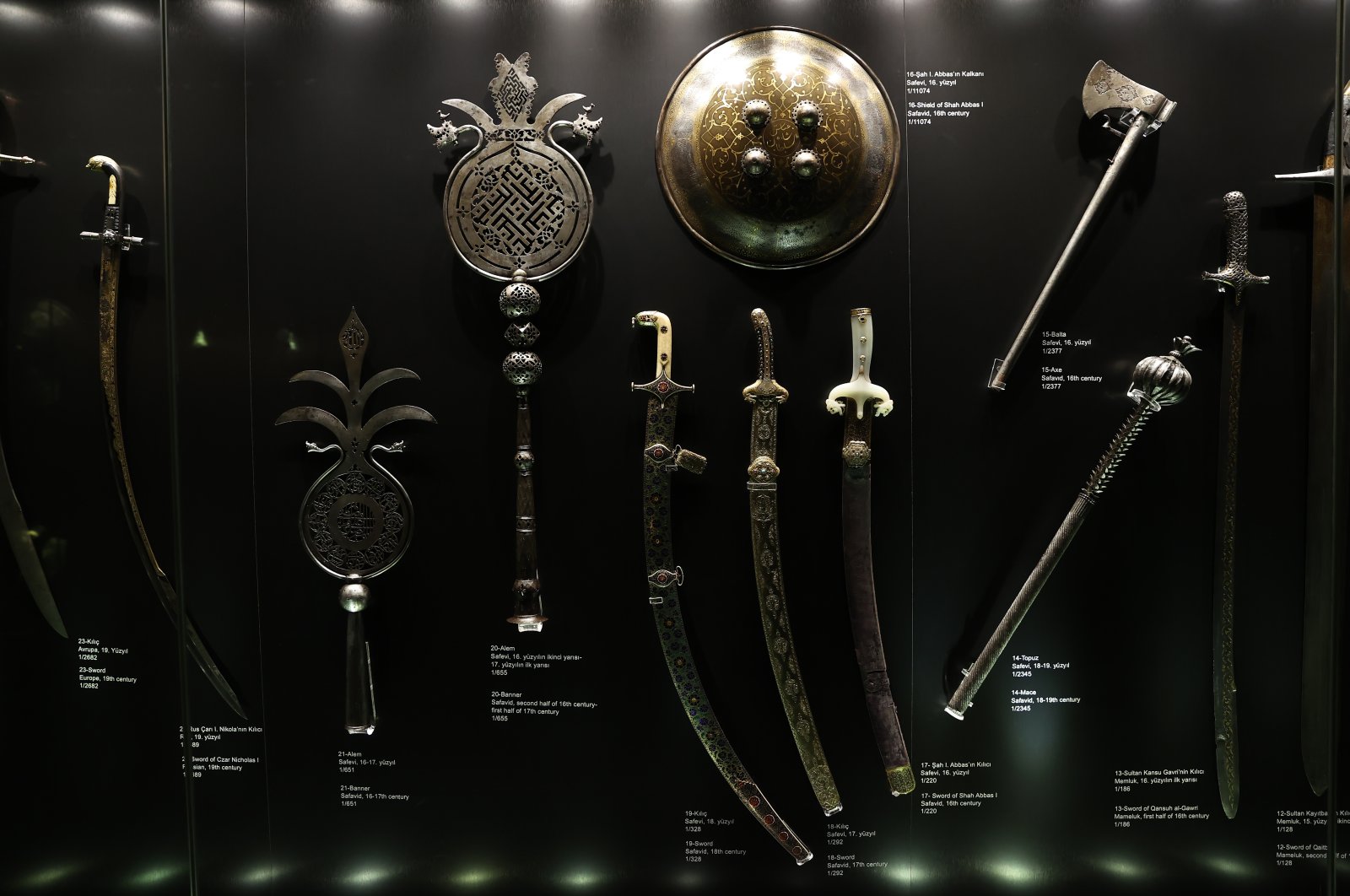 Topkapı Palace Museum features a glorious collection of weapons from diverse cultures. The pieces of this collection, each of which is a mesmerizing work of art with their ornamentations, are being comprehensively restored

Topkapı Palace, one of the most famous landmarks of Istanbul that once housed Ottoman sultans while the city was the capital of the empire, currently serves as a museum attracting tourists from around the world with its collections of Ottoman artifacts. The museum, affiliated with the Presidency of National Palaces, hosts one of the world's leading weapons collections in its inventory of historical artifacts. This collection of more than 33,000 weapons, which are dated over a wide period of 1,300 years and were used in battles and ceremonies, is being restored through special techniques by experts.

The Chamber of “Hazine-i Hassa” (Privy Treasure for the sultan’s private funds), where the priceless weapon collection of the Topkapı Palace is exhibited, is one of the most visited places in the museum after the Chamber of Sacred Relics. The diversity, historical quality, function and aesthetics of the weapons play an important role in this interest of tourists.

The richest part of the collection, which covers a wide period of 1,300 years belonging to Turkish, Umayyad, Abbasid, Mamluk, Iranian, Crimean-Tatar, Indian, European and Japanese cultures and which has been preserved for centuries in Ottoman “cebehanes” (arsenal), consists of weapons belonging to the Ottoman Empire.

In addition to the weapons belonging to Sultan Mehmed II, also known as Mehmed the Conqueror, some other Ottoman sultans and high-ranking statesmen, the collection includes much older weapons from the treasury of the rulers of conquered countries, weapons sent to the sultans as diplomatic gifts and weapons that the sultans personally commissioned.

One of the earliest examples of the collection is the seventh-century sword of the Umayyad Caliph Muawiya ibn Abi Sufyan. In addition, the 13th and 14th-century swords of the Umayyad and Abbasid caliphs and the 14th-century swords of the Mamluk sultans are among the other early examples. The collection comprises more than 33,000 weapons, such as edged arms and firearms used in attacks, along with helmets, armor, shields and horse armor used in defense and tuğs (a pole with horse or yak tail hair arranged in a circular form that served as an Ottoman flag), alems (a symbol attached to the hilly part of the tuğ or flag) and shields used in ceremonies.

The artifacts that make up the collection are rich treasures that reflect the unique style of the geography from where they were produced in terms of decorative features as well as the mastery of their construction techniques. The patterns and motifs used in their decorations turned each weapon into a rare work of art by elevating it from being just a weapon of war.

One of the most important factors in the survival of the weapon collection is restoration. The National Palaces Composite Artifacts Workshop undertakes vital tasks in the restoration of the priceless weapons.

The first of the works currently under restoration in the workshop is the sword and scabbard in the form of a Zulfiqar, which is estimated to belong to the end of the 16th century and the beginning of the 17th century. The artifact, which was used as a ceremonial sword, has gold decorations. It is thought that the sword was a gift to the sultan of the period or a high-ranking statesman. There is an inscription in Ottoman Turkish on the sword, which arouses admiration for its mastery and craftsmanship.

Another artifact that is being restored in the workshop is a sword belonging to a şehzade (prince) from the 18th century. The length of the sword, which is made of gold, leather and iron, is 38 centimeters (14.96 inches). One of the other artifacts under restoration is a 16th-century tombak shield. The works are planned to be exhibited again after the restoration processes are completed.

Onur Recep Er, a restorer of the National Palaces Composite Artifacts Workshop, explained that they are performing the restoration and conservation of composite artifacts in the workshop.

Restorer Er gave the following information about the repair works of the tombak shield and the Zulfiqar sword: "The tombak shield was made plating gold on copper with the old method. Since its main material is copper, corrosion has occurred on the gold surface due to the deterioration of the copper. During the restoration process, we take the oxidation by preserving the gold as much as possible. Afterward, we passivate the area of the oxidation and apply a preservative substance and send it back to the exhibition area. Again, the Zulfiqar sword is a unique piece of art. We think it was a gift to a sultan or a statesman. It consists of wood and gold plating on iron. Our problem with this is that corrosion caused by iron damages the gold engravings on the surface. It completely removes the gold surface. We try to stop this corrosion and protect the existing gold. It is very important to preserve the original material as much as possible and to use recyclable materials in the restoration.”