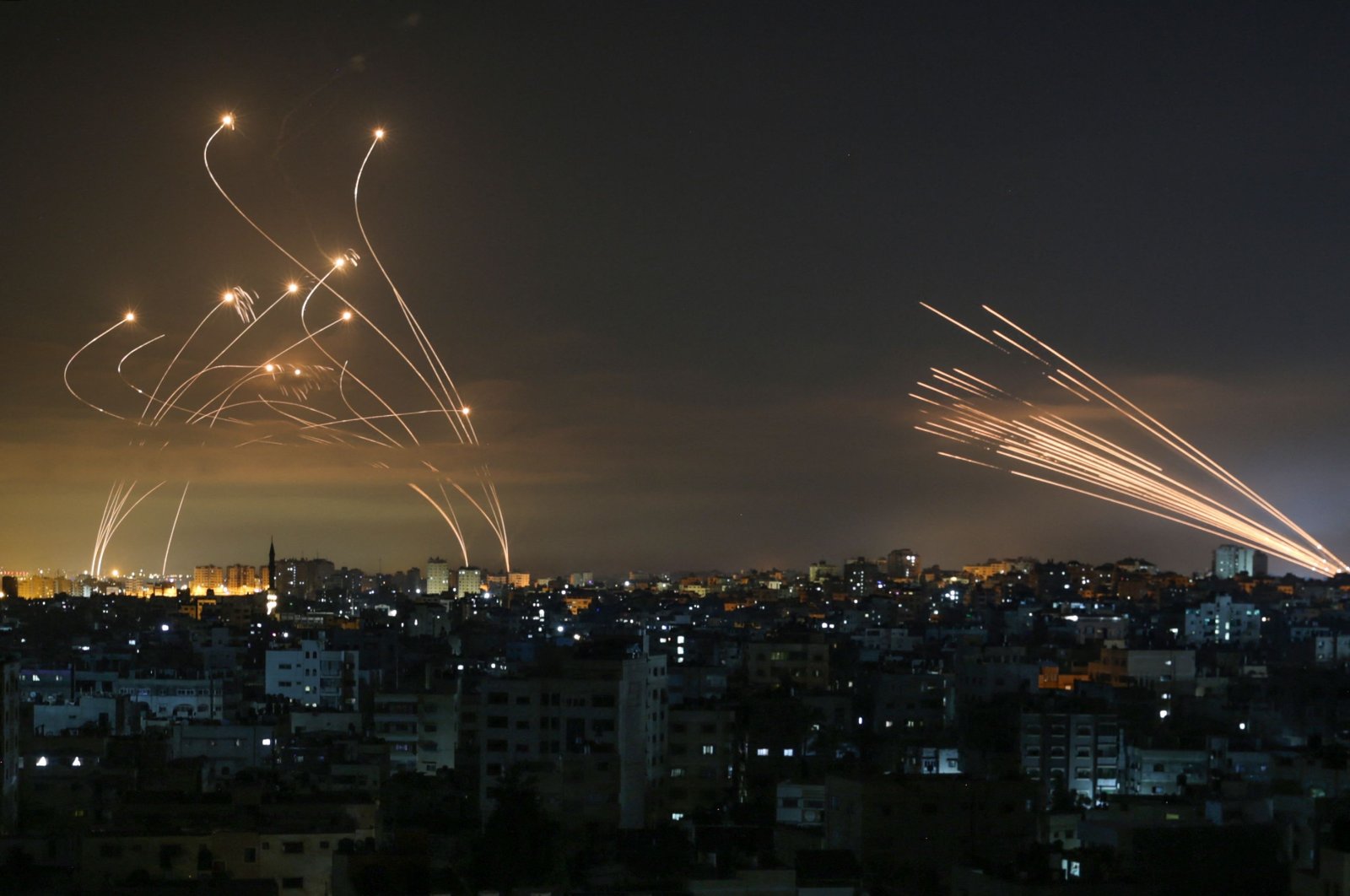 The Israeli Iron Dome missile defence system (L) intercepts rockets (R) fired by the Hamas towards southern Israel from Beit Lahia in the northern Gaza Strip as seen in the sky above the Gaza Strip overnight on May 14, 2021. (AFP Photo)
by Ayşe Betül Bal May 18, 2021 1:55 pm
RECOMMENDED

The rockets Hamas fired in retaliation to Israeli airstrikes on Gaza Strip are not very technologically different from the ones used in the past. However, they have still caused severe financial losses for Israel. Each missile Israel fires to intercept the locally manufactured, low-cost Palestinian rockets, is costing the country tens of thousands of dollars.

The discussion made headlines amid rumors that Israel's much-lauded Iron Dome air defense system was unable to intercept all rockets as some crashed in Tel Aviv and in critical areas like near a pipeline and in the vicinity of Ben Gurion International Airport, causing it to temporarily close to commercial flights.

The airstrikes on Gaza, which is currently controlled by Hamas, were preceded by days of tension and Israeli aggression in occupied East Jerusalem, where hundreds of Palestinians were assaulted by Israeli forces at the Al-Aqsa Mosque and in the Sheikh Jarrah neighborhood. The Israeli military has carried out airstrikes across the Gaza Strip since May 10, leaving behind a massive trail of destruction across the coastal territory and deliberately targeting civilian areas like schools and even Turkish and international media outlets’ buildings.

The death toll from the ongoing Israeli attacks on the besieged Gaza Strip has risen to 212, the Palestinian Health Ministry said Monday. The grim figure includes 61 children, 35 women and 16 elderly people, the ministry said in a statement, adding that 1,400 people have been injured during the offensive.

Uzi Rubin, an Israeli defense expert and engineer, who formerly headed Israel’s Missile Defense Organization, told Daily Sabah that the intensity of the Hamas rockets is much higher than in 2014 which saw the last major flare-up between Israel and Hamas before ending in a cease-fire.

According to open sources, Israel underwent the longest-reaching rocket assault in its history at the time, as the Palestinian factions fired more than 10,000 rockets from within Gaza, some with ranges covering most of Israel's territory. Hamas’ flexing its rocket muscles was an important test for Israel’s Iron Dome that was developed by the country’s Rafael Advanced Defense Systems and Israel Aerospace Industries, with financing from the U.S. and was put into service in 2011.

It operates with several independent units, including an independent radar unit, that picks up an incoming object, such as a rocket, determines its course and the place where it is likely to fall and intercepts it by detonating its payload close to the object, thereby destroying it.

When asked specifically about the changes underwent in the last few years that may have affected Hamas rockets' success rate in reaching target, Rubin said, “What changed was the numbers and intensity of the rocket barrages, not the technology or effectiveness." However, the way they were used may have been changed, according to him, which points out to the use of higher-caliber weapons with heavier warheads.

Rubin added that Iron Dome, like any other defense system, “is not leakproof.”

Its accuracy scores between 80% to 90%, usually near to the higher number, and that despite the increasing number of retaliatory rockets, he said, the Iron Dome hits most of the rockets, missing only 10% of them.

It has shot down an average of 85 to 90 of every 100 incoming rockets, Rubin said, since the beginning of recent escalation.

Iron Dome was designed to intercept short-range missiles and artillery like the ones commonly fired from Gaza, however, several reports and statements suggested that Hamas now has more longer-range missiles than ever, another aspect that may act as leverage in reaching a cease-fire.

Hamas military spokesperson Abu Ubaidah announced earlier that they had used a new rocket called “Ayyash 250” to strike near Tel Aviv which has a range of more than 150 miles.

The claim was not independently verified and Hamas' rocket stockpiles are still bare estimations, what may be key in pushing the sides toward a cease-fire is the cost of maintaining the escalation.

The interceptors of the Israeli defense system, which have not been tried on the battlefield against a regular army but against nonstate groups like the Hezbollah militant group, are way more expensive than the Hamas rockets, a well-known fact shared by defense experts. Rubin most recently pointed out that Hamas' best rockets are "relatively simply made" and "inexpensive,” as reported by the Jerusalem Post.

Reports suggest that the Qassam short-range rocket of Hamas costs anywhere from $300 to $800 each.

According to Tal Inbar, former chairperson of the Fisher Institute's space research center, the cost of Iron Dome's interceptors is between $50,000 and $100,000 each.

However, there is less information available on the cost of Hamas’ longer-range rockets such as the R-160, M-302D, M302-B, J-80, M-75, Fajr-3, Fajr-5 and a second-generation M-75. According to Inbar, the cost of these rockets is likely to be in the low thousands of dollars per rocket, or approximately two to three times more expensive than the shorter-range ones. Both Inbar and Rubin agree that it is still an expense that needs to be paid and even if Hamas has longer-range missiles, their ability to accurately hit target would still be questionable.

One of the main reasons is that, Hamas currently does not have precision-guided missiles like Hezbollah which would be more of a threat for Israel, as highlighted by Rubin in his articles.

In an article published in June 2020, the Israeli expert dubbed the father of Arrow missiles, said the belief that “missiles and rockets don’t win wars,” is a “dubious assertation,” is obsolete and “demonstrably false.”

“Modern precision-guided missiles have the same combat effectiveness as fighting aircraft yet are easier to operate and less vulnerable as they don’t rely on huge, immovable, target-rich airbases. Precision-guided missiles and rockets can paralyze the civilian and military infrastructures of entire countries, thus paving the way to their defeat in war. These weapons most certainly can win wars, and Israel should do everything in its power not only to prevent defeat by them but to use them to defeat its enemies,” he wrote.

Some 3,100 rockets have been fired from Gaza toward Israel according to the Israeli Army Monday while Defense Minister Benny Gantz said earlier the Iron Dome missile defense system had recorded more than 1,000 interceptions since May 10.

According to some, Hamas' strategy is to overwhelm the air defense systems of Israel since many believe that neither Israel nor Hamas are financing their missiles and rockets.

“You now have a nonstate actor that manages to strike targets in Tel Aviv using means that they produce themselves,” Fabian Hinz, an independent open-source intelligence analyst who specializes in Middle East missiles told the Washington Post. He was cited by the paper as saying that Hamas has acquired some of the rockets from abroad, including Fajr-3 and Fajr-5 rockets from Iran and M302 rockets from Syria, but the group is now capable of producing rockets domestically with ranges of almost 100 miles, technically putting most of Israel within range.

“In terms of a technological military shift, that’s quite something.”