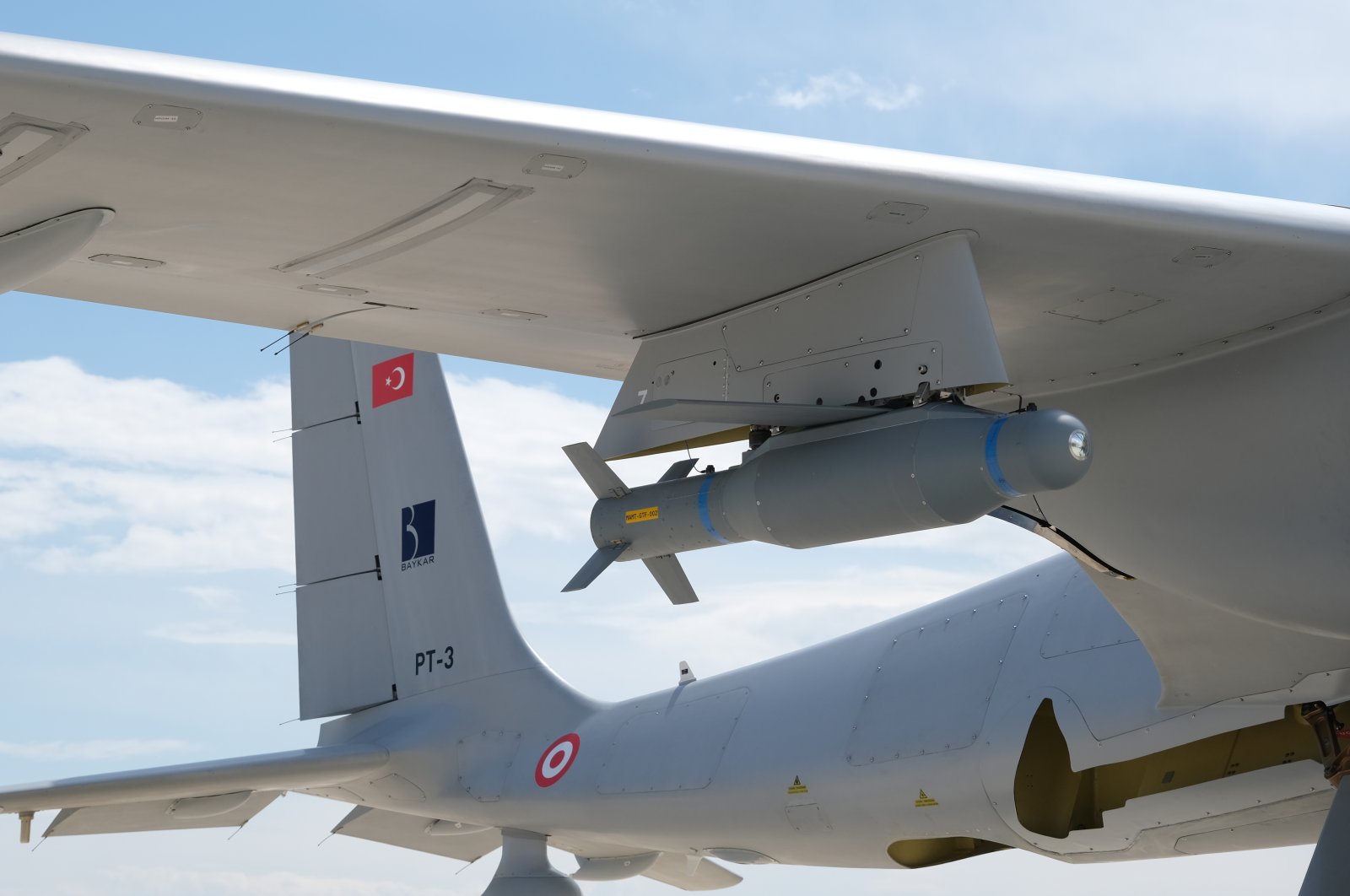 Selçuk Bayraktar, the Chief Technology Officer (CTO) of Baykar Makina, which produces the UCAV, shared a video on his Twitter account that showcased the successful shots fired by the combat drone with MAM-T, MAM-C and MAM-L smart micro munitions (MAM).

During the test conducted in the Baykar’s training and test center in northwestern Tekirdağ’s Çorlu district, all three of the lifeless test munitions without warheads, which were sent from Akıncı UCAV with laser targeting, hit the targets with pinpoint accuracy.

MAM-C is the high explosive variant while MAM-L is the thermobaric one. The biggest of the bunch, MAM-T is the long-range variant.

MAM-T, the new member of the family, was used for the first time during the firing test.

Developed to meet the need for higher warhead efficiency and longer ranges, the MAM-T has Block-1 configuration ammunition and a semi-active laser seeker head that provides high sensitivity against moving and stationary targets. Developed to be compatible with different platforms, MAM-T can be used against armored vehicles, buildings and surface targets with over 30 kilometers (18.6 miles) of range capability from UCAVs.

Mass production of the Akıncı UCAV has also started and the first deliveries are planned to be made this year. The Bayraktar Akıncı S-1, the first mass-produced model and whose integration has been completed, recently arrived in Çorlu to carry out tests.

The Akıncı UCAV came following the company’s success with the Bayraktar TB2 UCAV that was also manufactured locally and is actively used by the Turkish Armed Forces (TSK), General Directorate of Security, Gendarmerie General Command and National Intelligence Organization (MIT). The combat drone was exported to Ukraine, Qatar and Azerbaijan as well. Akıncı is longer and wider than the Bayraktar TB2 and is set to perform strategic tasks.

Akıncı – whose designs, software, avionics and mechanics all belong to Baykar – has nearly 100 computer systems. The UCAV, which has 5.5 tons of take-off weight, stands out with a total payload capacity of 1,350 kilograms (2,976 pounds) – 400 kilograms internal and 950 kilograms external.

The unmanned aircraft platform, which has a 20-meter (65-foot) wingspan with its unique twisted-wing structure, will also provide high flight safety thanks to its fully automatic flight control and triple-redundant autopilot system.

Bayraktar Akıncı, apart from the mini smart munition, is set to launch cruise missiles, making the craft a power multiplier when operated on the ground.

The state-of-the-art UCAV – in addition to carrying critical loads such as an Electro-Optical/Infra-Red (EO/IR) camera, the AESA radar produced by Turkish defense giant Aselsan, the Beyond Line of Sight (satellite) connection and electronic support systems – will also have advanced artificial intelligence (AI) features that will allow it to collect information by recording the data it receives from sensors and cameras on the aircraft. The AI system, which will be able to detect the angle of roll, stand up and orientation of the aircraft without the need for any external sensor or global positioning system, will provide environmental awareness by using geographic information. The advanced AI system will have the ability to make decisions by processing the data it obtains. It can detect targets that cannot be detected by human eyes, enabling Bayraktar Akıncı to be used more effectively.

News regarding the UCAV’s entry into the inventory, as well as its mass production, has been closely followed by defense enthusiasts both in Turkey and abroad, thanks to the local drone magnate’s proven success with other locally made drones like the Bayraktar TB2.

This particular drone earned worldwide fame after it was operated in Syria, Libya and Azerbaijan, paving way for more export deals for Baykar.