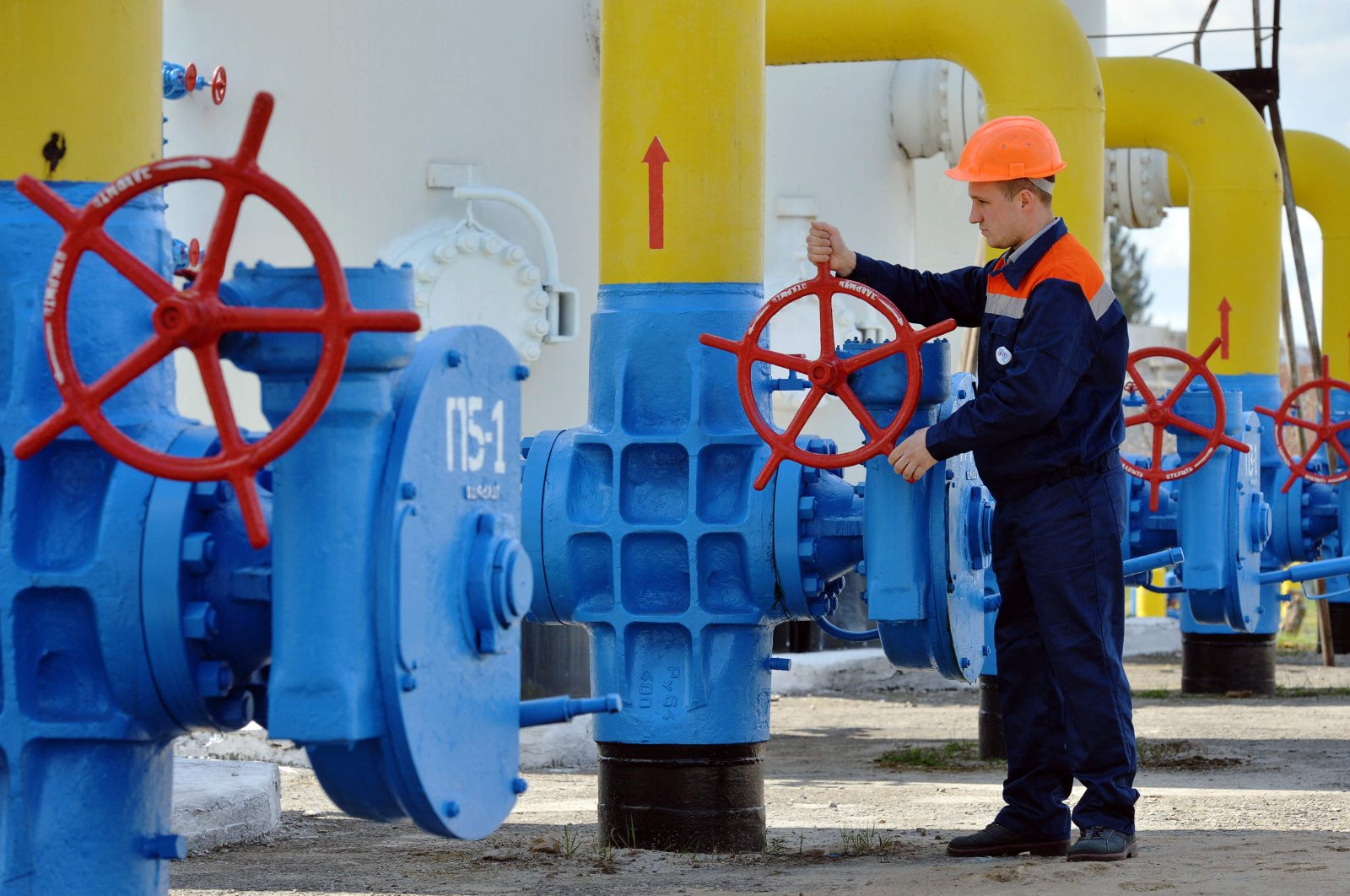 An employee turning a valve of a gas installation during a training exercise for handling emergencies at a gas-pumping station on the gas pipeline in the small town Boyarka in the Kyiv region, Ukraine, April 22, 2015. (AFP Photo)
by French Press Agency - AFP Oct 22, 2021 10:09 pm
RECOMMENDED

Europe is in the throes of an energy crisis with gas prices soaring to record highs as economies come back online after the end of pandemic lockdowns and renewables such as wind see a slowdown in supplies.

Critics in Western capitals blame Russia for the price hikes, saying Moscow is not upping deliveries to pressure Europe to agree to more longterm contracts and for the certification of the recently completed Nord Stream 2 pipeline.

The controversial pipeline, which bypasses Ukraine, has a total annual capacity of 55 bcm.

On Thursday, Russian President Vladimir Putin said Moscow was ready to ramp up natural gas supplies to Europe as soon as the pipeline receives regulatory approval.

The Ukrainian leader insisted Friday that Russia had "enough gas" and accused Moscow of orchestrating Europe's energy crisis, which he called "artificial."

"Ukraine has something to offer its European partners," the Ukrainian president said in exclusively written comments to Agence France-Presse (AFP).

"Existing capacities for pumping gas through Ukraine are enough not only to normalize the situation now, but also to ensure Europe against such price shocks in the coming years."

"You know that a crisis is raging in Europe," Danylov said.

"Today we have a contract with Russia for 40 bcm of gas, but today we can additionally offer our European friends an additional 55 bcm of gas."

No other details were provided.

Zelenskyy is a long-standing critic of Russia, which in 2014 annexed the Crimean peninsula from Kyiv and has since thrown its weight behind separatists in the east of the country.

In his comments to AFP, Zelenskyy urged Brussels to work with Kyiv against Russian "gas aggression."

"There is a real gas aggression against the European Union," he said, adding that only a "coordinated" response by governments on the continent to counter "blackmail" would see more moderate prices restored.

The 43-year-old Ukrainian leader said there was an "unprecedented need for joint efforts" in Europe and called on Brussels to work with Kyiv on solutions.

Russia turned off supplies to Ukraine in previous disputes and Zelenskyy this year referred to the Nord Stream 2 pipeline as a "dangerous geopolitical weapon" that would make Europe reliant on Moscow.

Russia, he said, "has repeatedly tried to freeze Ukraine, shutting off gas and demanding concessions that would damage Ukrainian national interests."

"Now it is Europe's turn to get themselves acquainted with the concept of gas war," he added.

"This is beyond the 40 bcm already stipulated in the current transit contract with Gazprom," the Ukrainian president said and added, "I can assume that this discount will be 50%."

When the Nord Stream 2 pipeline connecting Russia to Germany goes online, it is expected to double supplies to the continent.

But the project has divided European capitals because it diverts supplies from an existing route through Ukraine, which is an important EU ally.

Putin has blamed "systemic flaws" in the European energy market for the crisis.

Russian officials have said over recent weeks that suppliers are fulfilling obligations under existing contracts and said the country has to fill its own reserves ahead of winter.

In Moldova, an ex-Soviet country that recently elected a pro-European president, parliament Friday declared a 30-day state of emergency to secure cheaper natural gas from Europe after its supplier Moscow hiked prices.