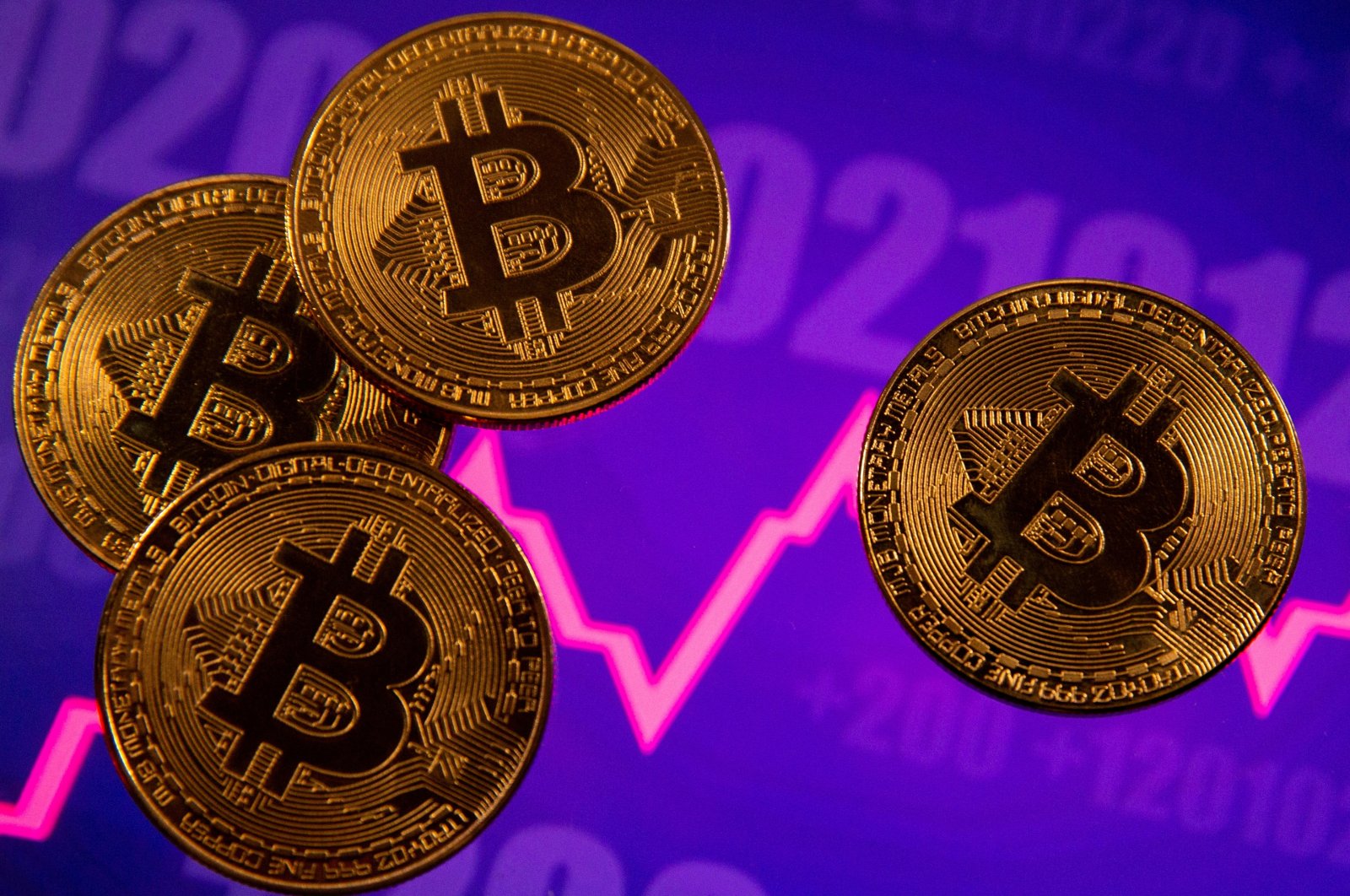 A representation of the virtual currency Bitcoin is seen in front of a stock graph in this illustration taken on March 15, 2021. (Reuters Photo)
by DAILY SABAH WITH AGENCIES Apr 18, 2021 12:57 pm
RECOMMENDED

The cryptocurrency market’s flagship coin, Bitcoin, plunged as much as 15.1% to $51,707.51 on Sunday, the most in more than seven weeks and just days after it reached a new record.

The second-largest coin on the market, Ethereum, also dropped almost 18% before paring losses.

The fall came amid speculations about the U.S. Treasury may crackdown on money laundering that’s carried out through digital assets.

Growing mainstream acceptance as an investment and a means of payment sent Bitcoin to record highs, along with investors’ seeking high-yielding assets amid low-interest rates.

Major firms including BNY Mellon, Mastercard Inc. and Tesla Inc. are among those to have embraced or invested in cryptocurrencies.

The electric-car maker had in February said it bought $1.5 billion of bitcoin and would soon accept it as a form of payment for cars, sending the price of the world's most popular cryptocurrency soaring.

Then on March 24, Elon Musk said that people can buy his company's electric vehicles using bitcoin and the option will also be available outside the United States later this year.

Wall Street firms like Morgan Stanley also began providing access to the tokens to some of the wealthiest clients.

According to Richard Byworth, CEO of Diginex, a Nasdaq-listed digital asset financial services company, the price of the world’s most popular cryptocurrency could reach as much as $175,000 before the end of the year.

Meanwhile, governments are inspecting risks around the sector, while the investor base widens as concerns still linger regarding the sector due to its high volatility. For example, Dogecoin, a cryptocurrency created as a joke and which has been boosted by Tesla boss Elon Musk, rallied more than 110% Friday before dropping the next day.

Most recently on Friday, the Central Bank of the Republic of Turkey (CBRT) banned the use of cryptocurrencies as a form of payment starting April 30, saying the level of anonymity behind the digital coins brings the risk of “irrevocable” damage and significant transaction risks.

The CBRT said cryptocurrencies and other such digital assets based on distributed ledger technology could not be used, directly or indirectly, as an instrument of payment.

A lack of regulation, supervision mechanisms or central regulatory authority, combined with the potential for criminal activity and the high volatility of their market value mean digital tokens entail “significant risks,” the central bank said in a statement.

Last week, Royal Motors, which distributes Rolls-Royce and Lotus cars in Turkey, became the first in the country to say it would accept payments in cryptocurrencies.

The Turkish government in March said it “shares global concerns” about cryptocurrencies and that the developments were being closely followed.

India is also expected to propose a law that bans cryptocurrencies and fines anyone trading or holding such assets, according to a Reuters report in March, citing an unidentified senior government official with direct knowledge of the plan.

“Investing in crypto assets, or investments and lending linked to them, generally involves taking very high risks with investors’ money. If consumers invest in these types of products, they should be prepared to lose all their money,” said the FCA.

On Sunday, about 1,018,638 investors in the crypto market had their accounts worth about $10 billion liquidated amid the sudden drop seen in the number of altcoin assets.