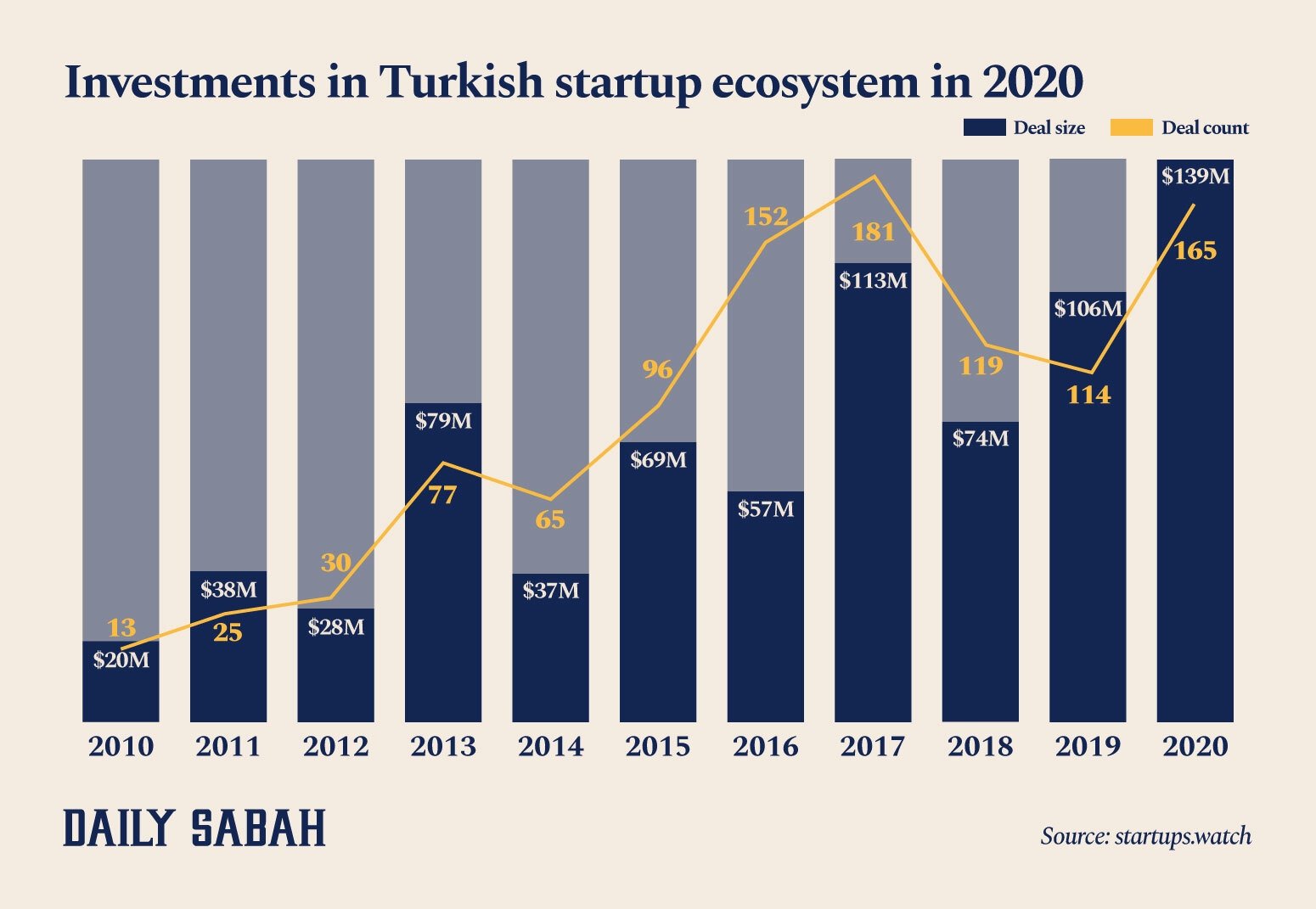 An infographic shows the number and amount of investments made in the Turkish startup ecosystem since 2010. (By Ayla Coşkun / Daily Sabah)
by Timur Sırt Feb 05, 2021 3:05 pm

The coronavirus pandemic did not prevent investments in technology startups from reaching their highest figure ever. Data by the startup monitor startups.watch showed a total of $139 million (TL 983 million) was invested in 165 startups throughout 2020.

The figures as well as other statistics and predictions were announced during the fourth Turkish Startup Ecosystem event, which was held online this year due to the pandemic.

Gaming startups led the way in investments, while many ventures managed to close the pandemic-ravaged year with growth.

The amount of investments surpassed those in 2017, seen as one the best years for the startup ecosystem, but lagged behind in terms of the number of the startups that received investments. Some 181 startups attracted investments totaling $113 million in 2017.

The gaming industry, which has come to the fore with recent exit stories, became the entrepreneurs’ favorite. It was the sector in which the most startups were established in both 2019 and 2020.

Some 141 gaming startups have been established in Turkey in the past two years. In addition, the country’s biggest metropolis, Istanbul, has become one of the European cities with a large number of gaming studios.

Istanbul-based Peak Games’ sale for over $1 billion as well as the sales of Rollic and Gram Games are said to have had an impact in establishing so many gaming startups.

Not only did Peak Games’ $1.8 billion sales deal with U.S.-based global gaming giant Zynga last year enable it to become Turkey’s first-ever unicorn – a startup company valued at over $1 billion – but also made it the largest venture in Europe to exit in 2020, supported by venture capital.

Insider, Meditopia and Getir were among other leading startups in 2020. The common feature of the three was that they were not limited to the local market and that they played big.

Investors mostly invested in software as a service (SaaS), financial technology (fintech) and health technologies based on the number of startups receiving investments, while SaaS, artificial intelligence (AI) and marketing technologies received the largest amounts.

In 2020, Turkey was among the countries with over $100 million in investments per year, as in the previous year. Among all European countries, it ranked 18th after Poland. The country ranked fourth in the Middle East and North Africa, after the United Arab Emirates (UAE) and Saudi Arabia.

In 2020, as in every country, investors insisted on moving their ventures to their headquarters commercially in order to see the startups nearby.

Of the $139 million investment in 2020, $78 million was made to Turkish startups that commercially moved their venture abroad. Moving startups to the U.S. became an inevitable trend particularly for the startups in Europe.

A record was broken both in terms of the number and quantity of new ventures. Alesta Yatırım, Teknogirişim GSYF and Teknasyon’s 29 investments attracted the most attention from institutions in terms of number.

One of Turkey’s leading information and communication technologies companies, Türk Telekom’s venture capital subsidiary TT Ventures General Manager Muhammed Özhan underlined that it was a year in which the borders were erased.

“As Türk Telekom, we focused especially on investments in education and health startups during the pandemic period. We focused on the growth of our own ventures,” he said.

"Our investment in Mentalup educational technology continued to grow. Our Virasoft health technology startup has continued to grow beyond borders. Providing remote health support, Doctor Turkey closed a big gap during the pandemic period. Fintech will be among our top priorities in 2021. We are also considering investing in cybersecurity and network analytics. We will also triple the size of TT Ventures," Özhan said.

A total of $270 million came from 10 funds in 2020, meaning that Turkey broke a record in terms of both units and quantity in a year.

When these figures include the announced funds that have not yet completed all transactions, it can be said that the largest amount of investment so far awaits entrepreneurs. Again, the Regional Development Fund of TL 250 million ($35 million) announced in 2020 paved the way to establish new funds.

The pandemic also had a noteworthy impact on the investments. Carbon Health, which ranks first, is a health care startup, while Gorillas is a grocery delivery startup, which became especially useful in times of quarantine.

Speaking at the opening of the startups.watch event, TÜBITAK Chairperson Hasan Mandal told university students that the institution removed the requirement for entrepreneurs to be graduates in order to access investments.

“We came together many times during the pandemic process with the startup ecosystem,” Mandal said. “At the beginning of the pandemic process, we took rapid action and contributed to startups led by universities such as ITÜ, METU and Boğaziçi. In this process, in line with the spirit of entrepreneurship, startups will be able to apply to the institution to receive investments before graduating," he said.