Russia, amid own surge in cases, may resume Turkey flights soon 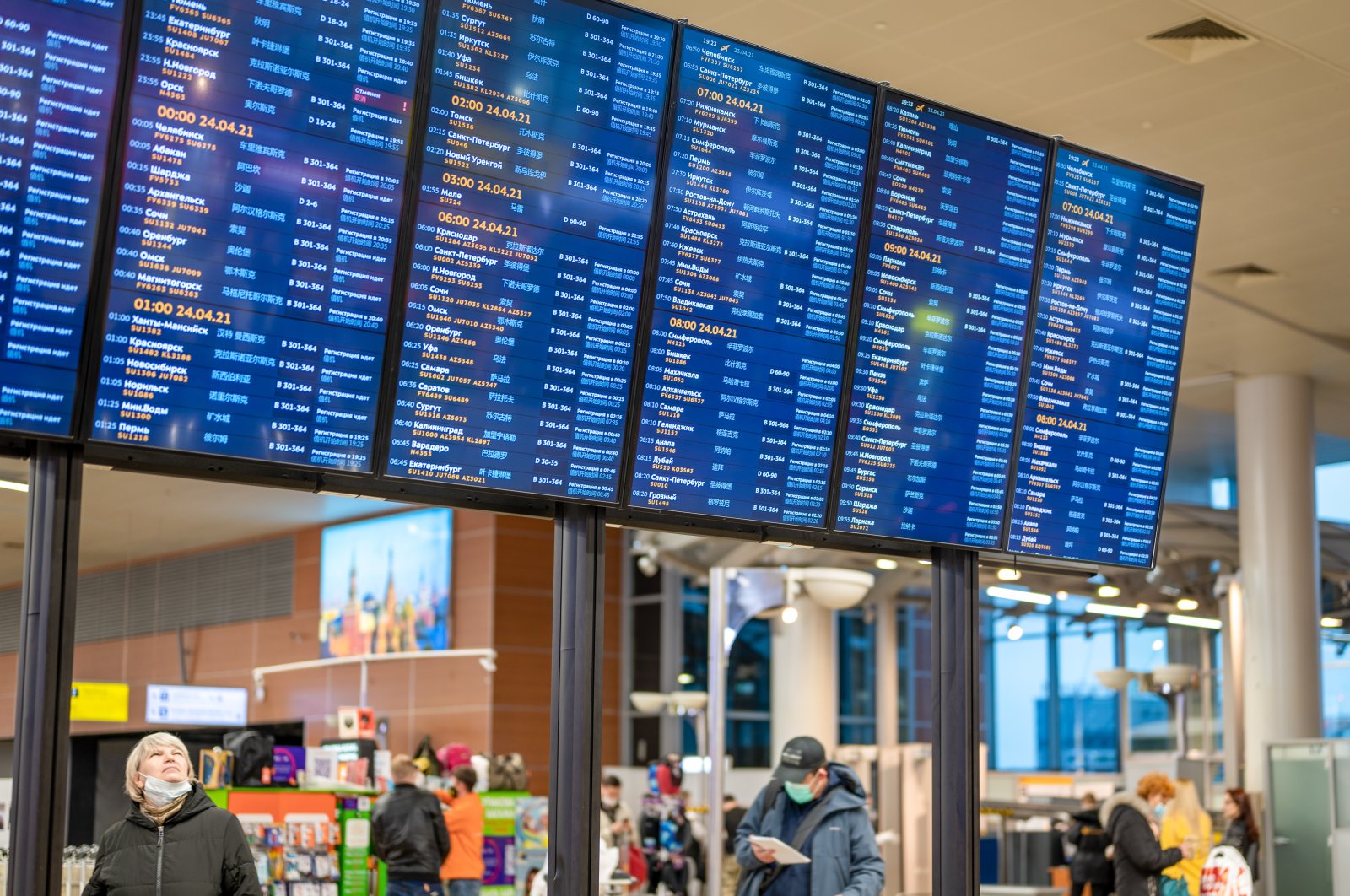 The schedule of departure flights at a terminal in Sheremetyevo International Airport, Moscow, Russia, May 7, 2021. (Shutterstock Photo)
by DAILY SABAH Jun 18, 2021 2:42 pm
RECOMMENDED

Moscow is considering opening flights with Turkey as of July, a report citing sources said Friday, a day after a Russian delegation arrived in the country to assess coronavirus pandemic measures at tourist locations.

Moscow had in April suspended most air travel with Turkey until June 1, a ban it later extended through June 21. Its coronavirus task force cited surging daily cases in Turkey behind the suspension.

Yet, daily COVID-19 cases in the country have dropped significantly since then to below 6,000 – down from a record high of above 60,000 in April. Turkey has also added great momentum to its inoculation drive in recent days.

On the other hand, Russia is grappling with rising confirmed cases. The infections in Moscow hit a daily record Friday, up nearly 30% from the day before. The numbers forced the capital to close its Euro 2020 fan zone and extend other curbs.

The Russian delegation arrived Thursday in the Mediterranean resort city of Antalya – one of the leading destinations for Russian vacationers in Turkey – and toured airports and accommodation facilities.

The delegation’s report is expected to be released in the coming days as the flight ban is due to expire on Monday.

There is no final decision yet, according to two sources cited by Forbes. But they said the closure of flights has led to overloading in the resorts in the south of the country, which could contribute to the further spread of the coronavirus in Russia.

“Given the sharp jump in the cases in the country, it already seems safer to open flights with Turkey, where the indicators have already stabilized,” one of the sources said.

Up to seven flights per week could be opened, the source noted.

They also topped the list of visitors by nations from January through April with 552,048. Some 2.7 million foreigners arrived in the four-month period, down 35.6% from a year ago.

Around 2.1 million Russians visited last year and 6 million in the year before the pandemic.

The rise pushed the national infection tally to 5,281,309 since the pandemic began. The Kremlin blamed the surge on reluctance to get vaccinated on “nihilism.”

Moscow Mayor Sergei Sobyanin on Friday extended restrictions he had imposed earlier, which include a ban on public events with more than 1,000 people, an 11 p.m. closing time for cafes and restaurants and the closure of fan zones set up for Euro 2020.

Sobyanin said earlier this week that Moscow, home to 13 million people, was facing a new, more aggressive and infectious coronavirus variant, and that the situation in the city was deteriorating rapidly.

It was not clear if he was referring to the Delta variant, which was first identified in India and has caused a resurgence of cases in the U.K.

Asked to explain the surge in cases, Peskov blamed the virus’s “cunning nature,” a reference to its mutations, as well as “total nihilism, and the low vaccination level.”

At a briefing, he rejected the idea, posited by some critics, that Russians were reluctant to have vaccinations because they distrusted the authorities.

As of June 2, the most recent tally available, only 18 million Russians had received at least one dose of vaccine people so far, one-eighth of the population, which is far less than most Western countries.

On the other hand, Turkey’s Health Minister Fahrettin Koca announced on Twitter a record 1.58 million doses had been administered in just one day on Thursday.

The country has so far administered over 38.85 million doses of COVID-19 vaccines since it kicked off its mass vaccination campaign in mid-January.